I’ve adored your books written as Diana Norman and rejoiced when Rosario broke the news that you also write under this name. When I knew you had this and another book already released, I was elated. As I read this book, I was euphoric. I wanted to race through it to enjoy it quickly but I also wanted to take my time to savor it. In the end, I compromised and spaced it out a little by doing internet searches on events and people mentioned in it.

City of Shadows is subtitled a A Novel of Suspense and it kept me glued to it for the entire length. In the despair of 1920 Berlin, a woman is thrown into then fished out of the Landwehr Canal. After treatment at a local hospital, she’s sent to the Dalldorf asylum. Two years later an enterprising conman businessman hears about how another inmate is trying to convince everyone she can that the woman is the Grand Duchess Tatiana, somehow miraculously saved from the horror of the House of Special Purpose in Ekaterinburg. “Prince” Nicolai Potrovskov has an eye for opportunity and is determined to mine this one for all he can get.

His well educated secretary/dogsbody Esther Solomonova is appalled at his plans to groom Mrs Unknown into a Russian Grand Duchess and is relieved when she hears that the woman denies being Tatiana, Olga or Marie. Oh no, she’s none of them but does claim to be Anastasia, the youngest daughter of the last Czar of all the Russias. At first Esther refuses to help further this scheme to win Nick a share of the reputed lost Romonov fortune but, as he reminds her, without him she’d be starving on the streets of starving Berlin, and she ultimately knows she has no choice. Before they leave with “Anastasia,” now dubbed Anna Anderson by them, from the asylum, the inmate who first began to spread the word about her tells Esther something. Every six weeks for the past few months, a big man has come to there and lurked around the grounds. Clara is convinced he’s there to get Anastasia and Anastasia is clearly terrified of someone though she refuses to say whom she fears. At first Esther rolls her eyes at it but after a big man comes to Nick’s nightclub and tries to find Anna, only to be driven off by Esther and the club bouncer, Esther’s not so sure.

She calmly tells police inspector Schmidt about it in the chaos after the event. A survivor of the Western Front, Schmidt recognizes a woman who’s obviously lived through a few crises. He also knows that these people who work at the Russian emigre’s slick night club are keeping something from him but with nothing further to go on, he has to chalk this one up as unsolvable and move on. Weeks pass and Esther along with a fellow worker at another of Nick’s clubs begin to work on Anna. Natalya is the daughter of upper servants who worked at Czarskoe Selo and can fill her in on little details of the late Czar’s favorite palace. Both of them soon realize they’ll have their work cut out for them with Anna whose rude, superior attitude is a far cry from the well known easy going temperaments of the royal daughters. But what really shakes Esther is when another nightclub employee is found brutally murdered. On a six weekends interval. A woman, who Esther realizes, the big man might have heard would know where Anna was being kept. But though she badgers the police to look into the murder, Esther can’t reveal what they’re up to and so it goes nowhere. That is until another woman is killed, again on a six week interval, and Nick is forced to reveal Anna to the world.

Inspector Schmidt finally hears the whole story, or what Esther can tell him without exposing the con, behind Anna’s appearance in the asylum, the big man who Esther knows is after her and how it all ties in with two murders. But when he starts to try to unravel the knots in the case, he discovers it might tie in with a growing political movement in Germany, one whose members think nothing of brutality to advance their cause and who use that brutality to send Schmidt a message. Nine years will have to pass before past events catch up with Germany in the waning days of the Weimar Republic. As Herr Hitler positions himself and his Nazi party for power, Anna still seeks to prove herself to her detractors and Schmidt along with Esther tries to bring a ruthless killer to justice.

This book is fabulous. All the characters seem to come alive and I can feel the gnawing hunger pinching the stomachs of everyone living in Berlin in 1923 as they desperately try to survive one more day. I have an inlaw whose parents survived post-WWI Berlin and Mutte told us about going out to look for food each day pushing a baby carriage of increasingly worthless paper money. In addition we know that both Anna and Esther have fought to survive nightmare horrors which would have brought most people to their knees. Esther hates what she’s being made to do and yet she can’t blame anyone for trying to escape and knows she’ll do almost anything herself to keep a roof over her head and food on her table. Schmidt sees his beloved Berlin sunk to her knees yet keeps struggling to do the best job he can bringing it justice. Then watches in despair as democracy and the job he’s tried to do well are consumed in the firestorm unleashed by the Nazis.

No, at times this book isn’t easy to read. We get glimpses of Esther and Anna’s pasts and see things which no one should have to live through. We are shown events in Russian and Polish history which brought on the Russian Revolution and the end of the Romanovs in the cellar at Ipatiev House. We also see what’s coming to Germany and know with our hindsight that worse is to come. I finished the book mentally exhausted and almost physically drained by its events and yet I can’t recommend it enough. The story telling is excellent. The plot is tight. The characters are people I felt I came to know personally. My one complaint would be that the resolution of killer’s fate was almost too easy. I wanted him to suffer more while alive. Grisly of me, I know, but you made him such a being of horror that I can’t help it. However, lest any readers fear that they’ll make it to the end and not be rewarded for their trip, you give us a neat twist on the legend of Anastasia and a romance for two people who couldn’t deserve it more. 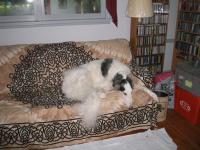 Brava Ms Franklin. My beautiful borzoi, who lounged at my side as I read, and I salute you. See, you can see him lounging.