There were a number of eink prototypes at CES, so many that it prompted this article at Gizmodo calling eink readers the spam of the show.

There will soon be two kinds of happy ebook-reader owners. The people who paid a fair amount for a reputable ebook reader from one of the companies they already buy books from, and the people who spend like $50 on a no-name ebook reader that supports a lot of formats, who gets every book they can think of as a pirated copy over BitTorrent. Everyone else-‘both the buyers of tier-two ebook readers and the makers of them-‘are going to be screwed.

I don’t disagree with this assessment and the reason for that is because of the rise of netbooks which experienced a 72% increase in sales in 2009. 2010 is shaping up to be the year of the tablet. Steve Ballmer displayed an HP tablet, Apple is purportedly releasing one in the second quarter of this year and Notion Ink displayed its tablet, Adam, with the Pixel Qi transreflective screen.   This is not to say that there won’t be a continuing market for dedicated devices but it’s likely to be small.

The best of the show: Notion Ink’s Adam tablet.

This was only a prototype but functional versions will be displayed in February 2010. The 10″ Notion Ink tablet runs off Android and presumably would allow a user to avail themselves of the Android App market. Kindle and BN eBook Reader are supposed to have Android apps in the works. Other platforms may be available in the future.

Slashgear described the Pixel Qi screen on the Notion Ink tablet as follows:

Pixel Qi's technology means you can operate the display in two different modes: as full color LCD for use indoors or in a low-power reflective mode that actually gets brighter the more direct sunlight falls upon it. This latter mode is comparable to E Ink in its appearance, but Pixel Qi can still show smooth, responsive video (and slightly muted colors). Users will be able to manually switch the backlighting on or off, or leave it set to automatic and have the Adam toggle it itself.

You really need to go to Slashgear and look at the different photos they have. The battery power for this device is quite robust. The manufacturer of the tablet is professing the device can get up to 160 hours of use off a 3 cell battery (3 cell batteries are standard for most laptops).

The rest of the pack. This is a dual screened ebook reader/tablet. It has an eink screen on one side and an lcd screen on the other. You read one the eink side and browse the internet or your ebook library on the other. One of the problems I perceive is that while you type one handed on the right side, the notes appear on the eink side. The refresh rate of eink devices is fairly slow. When I was using the nook, I was disappointed that the notes output appeared on the eink screen because it caused a big disconnect between the input (you typing) and the output (the letters appearing on the screen).

The Entourage Edge reads ePubs and PDFs. It connects wirelessly to the internet and includes an audio recorder and a video camera. The Edge runs Android but I’m not certain whether you can add Android applications. The device is rather heavy, weighing in at 3 lbs, and the cost is $490. You can demo the device here. 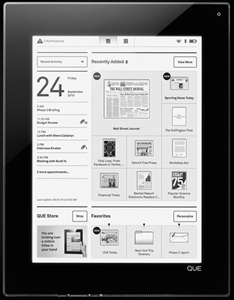 Plastic Logic is marketing this a business reader. The screen is not the same as the other eink devices which incorporate the Vizplex displays. No one has done a comparison of quality or clarity of the Plastic Logic screens v. the eink screens. Gizmodo says that the refresh rate felt slower than the nook or the Kindle (and I consider the nook to be very slow).

The device is also very costly. For $650 you get 4 GB on board storage with Wifi and Bluetooth and $800 for the 8GB 3G-enabled model. The screen size is the same as a piece of paper: 8.5″ x 11″. It reads the following formats natively (meaning without conversion, just load the device up and go): PDF, GIF, JPEG, PNG, BMP, ePub, and TXT.

Plastic Logic is targeting this toward the business reader. This may make a lot of sense. More companies are paperless and these devices, even at the high price, would represent a savings.

There are no buttons. Navigation is entirely through the touchscreen which is the advantage it has over other large screen e ink devices such as the Kindle Dx or the Iliad by iRex. Another large screen device is the Skiff Reader. The Skiff Reader is a large, flexible eReader. The screen measures 11.5 inches diagonally. From the specifications, it appears that it does not incorporate the Vizplex screen either, instead a “Rugged Metal-Foil e-Paper Display”.

Gizmodo reports that book reading seems awkward on the device:

Books look fine, although clearly the Skiff is designed for newspapers; there’s about an inch of blank space on all sides when you read a book, because 11.5 inches of text is a lot to stare at. Other than that slightly unfulfilled feeling when you see unused space, book-reading should be no problem.

This looks to be a content specific device. How many people will want to use this just for newspapers remains to be seen. The price of this device has not yet been announced. Perhaps this device will be subsidized as it will be sold in Sprint stores.

Of the dedicated devices, I thought this one was the most interesting.   Liquavista brings color to paper like computer screens but MobileRead notes that the release of a commercial device might not come until 2011.   By then, some believe that Kindle and PixelQi will have already released color eink devices.   Kindle is purportedly in talks with Qualcomm and PixelQi is said to be working with Notion Ink to release a dedicated color eink reader.