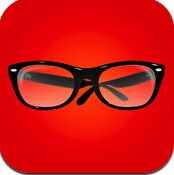 Recently a new ereading app has been released for iPad users.  Marvin is currently free but I suspect that there may be a charge for it in the future. Marvin touts itself as an intelligent reading application.  It’s intelligence is based on the app’s ability to process and analyze the text in the book.

When you turn on the “Deep View” feature, it creates a text index of names, places, and other words.  Those names, places, words are then sorted by importance (number of times the word appears in the text) or by appearance (when the words first appears in a text).  You can flag certain words and names and instruct Marvin to create a summary.

While this might not be helpful with a fiction book, this summary feature could be incredibly helpful for non fiction and educational purposes. 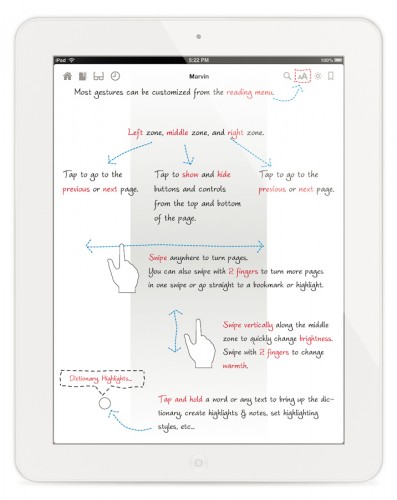 First, it is free for a limited time.  Beyond the “Deep View” features, however, is the general look and feel of the App itself. It is feature rich and easy to use, as if it incorporated all the best elements of the Kindle App, Nook App, and iBooks into one.

The library view, for example mimics the Nook App home screen with the current book you are reading dominating the top of the screen and recently opened books in a scrollable menu at the bottom.

There are three ways to customize the light on your screen: brightness, warmth and tint.

Marvin uses the swipe ability in new ways.  Swipe to the left and you are greeted with four options: Share, mark read, flag new, and delete.  For sharing, you can store up to five email addresses of people that you often communicate with regarding your books.

You can sort by “Author, Book Title, Date Added and Last Opened.”

The settings menu is always one tap away and allows you to toggle on and off features like status bar while reading, hiding page titles and foots, using multi-color bookmarks, animating page turns.   The status bar shows you how many pages you have left in a chapter and the bar at the bottom graphically presents your progress in the book itself. Dragging the arrow moves you quickly throughout the book.  There is even a “tap for last position” which takes you back to the last place you were before you started moving around in the book via the status bar.

You can link to your Dropbox account but you are limited to viewing 1000 titles as that is the limit in the Dropbox API.

Currently Marvin works only with DRM free epubs so you can’t use this program with books you’ve purchased from B&N, Sony, Google, Kobo, and iTunes without first stripping the DRM.

There is no way to organize your books into folders.

I’m not a fan of how you view your notes.  In iBooks and in the Kindle App, you can see the text of the note from the table of contents area and you can also see that you’ve left a note, denoted by a little note icon. In Marvin, you only know if you have left a note if you tap on highlighted text.

If you have an IPad, it makes sense to download this while its free. I’ve been reading books on it for the last week and really like the interface and ease of use.

AirFile is an add on app in that it does not work without a Dropbox account but if you have a Dropbox, this is really a must have app.  Dropbox is a cloud storage and sync application. I use it for my ebooks, but you should be aware that there have been privacy concerns raised about Dropbox and there are much more secure options out there (which I will go into next week).  AirFile allows greater sorting of Dropbox files, ability to create folders, rename files; and facilitates transfers between Dropbox accounts. 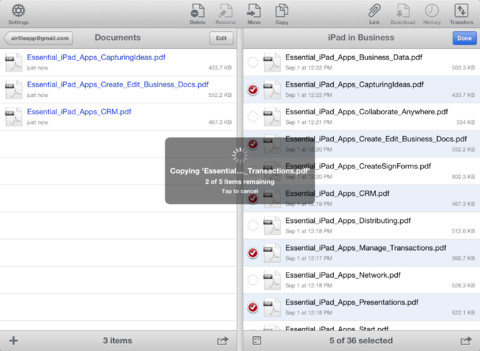 AirFile allows you to easily sort your Dropbox files by “Name, Date Modified, Client Date Modified and Size.”  For people who use Dropbox as a backup for their Calibre database, the inability to sort by date can be really frustrating.  I’ve tried to work around that by creating OPDS catalogs but even that can be a hassle.  Being able to sort by date modified was so wonderful I almost shouted out with glee.*

It’s currently free, but there might be a price tag attached in the near future.

AirFile’s other main feature is the ability to transfer files between Dropboxes.  The reason you might have more than one Dropbox is to separate work from personal or maybe because you keep ebooks in one and music in another.  Dropbox allows you 2 free GB per email address and after that you have to purchase more.  Some have signed up for multiple Dropboxes to get around the 2 GB limit.

AirFile comes with an in app text editing ability.  It’s not readily apparent but if you open a text editable file, you can then type your changes. Tap the close button and “Save to Dropbox” or “Discard Changes” will appear.

I only have one Dropbox and therefore one side of the screen being dominated by a second folder listing is a big waste of space.  I wish that could be turned off.

AirFile also presents some security risk.  You must allow the app to have full access to your Dropbox account.  If you store sensitive information in your Dropbox like passwords or banking information, you may not feel comfortable using this app.

There is no drag and drop meaning you can’t tap a file or folder on one side and drag it to the other dropbox account.

This is a minimalistic looking app that brings some much needed functionality to the mobile access of Dropbox. The sorting feature is one that users have been asking for since the inception of Dropbox but has never been implemented.

Amazon Instant Video allows you to stream purchased, rented, and free video available at Amazon.com.  If you are a Prime Member, you can use this app to watch those movies and television shows that are free.

Before this app, Amazon Instant Video was available to mobile users only by way of the Kindle Fire devices.  Amazon now makes this feature available to iOS and Android users meaning you aren’t dependent on Amazon’s hardware to get all the benefits of the Amazon store.

Why you want it.

This free App allows you to be device independent.  You can buy any iOS mobile device or Android device (except for the Nook Tablet) and access the movies and videos on Amazon.  For Prime users that means thousands of free movies and television shows available to you whereever you have a WIFI signal.

For what it does, it’s a pretty darn good app but one feature that is missing is the ability to port out video. Amazon (along with a lot of other video apps) does not allow you to take advantage of the mirroring capabilities in Android or iOS so you can watch on your mobile device but you can’t hook your mobile device up to your television and watch the movies on the big screen which is a great feature of the iOS Movies app.

This is a must have App for Amazon customers, particularly Prime members.

→ Jane
Previous article: REVIEW: Chains of Revenge by Keziah Hill
Next Post: REVIEW: The Secret of Ella and Micha by Jessica Sorenson