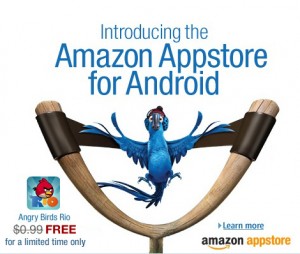 On March 22nd Amazon launched their much speculated about Android Appstore.   This presents an interesting addition to the Android ecosphere, an app store that has the potential to outshine the official Android Market provided by Google.   All in all Amazon's Appstore isn't really too different from the Android Market.   At this point it's basically the Market after it's been Amazonized, adding a few features that could potentially set it apart, in a good way.   Amazon does have fewer apps right now and I'm sure at least part of that is to do with their app approval process.

One nice thing the Amazon store has right now is that they're giving away a free, normally paid, app each day (they're paying the app developer 20% out of their own pocket apparently).   I'm sure this won't last long term, but it's a nice bonus while it lasts. 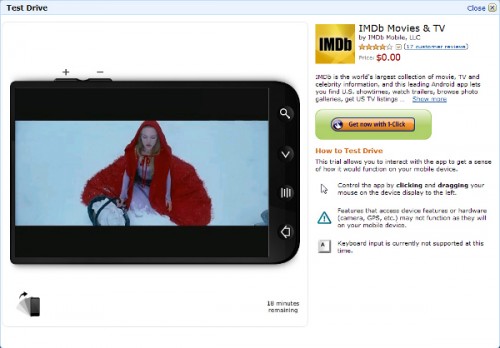 Another interesting feature with great potential is the ability to "test drive' apps from your computer.   I tried Ball Buster, Connect 4 and the IMDB apps and found the test drive gave me a pretty good feel for how things would work on my Android devices.   "Test drive' isn't available for every app, in fact it appears pretty limited, but hopefully the number of apps you can test will grow over time as it could be a huge advantage.

There are basically two methods of shopping both the Amazon and Google stores.   You can of course do so on your device itself through the store's app or you can shop from each store's website.

The Appstore section of Amazon's website is what anyone who shops Amazon would expect.   It's got the basic Amazon "feel' to it and has a good amount of detail on each apps product page.   There are category listings as well as sections for things like Best Sellers, New Releases, Deals and Featured Developers.   The app detail pages have the Amazon standards such as "Customers Who Bought This Item Also Bought' and the ever present, sometimes helpful often useless, review area.   While Google's Market website has much the same info Amazon's has a slicker "feel' to it.   The Google site does a better job of providing information such as permission requirements and honestly right now I don't find one better than the other overall. 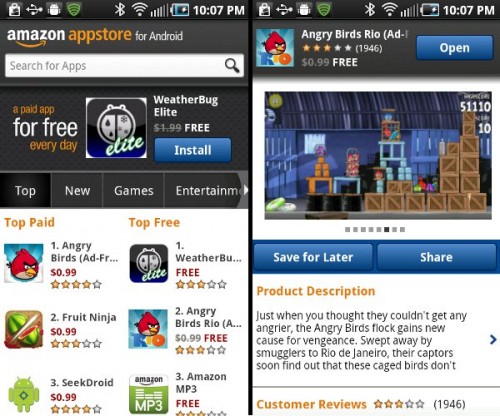 The way many people will acquire apps is directly through the store apps installed on board their device.   Like the website Amazon's app has a certain Amazonish look to it and overall has a slicker feel to it , it's kind of a mini version of the website, while Google's has their trademark simple more bare bones feel.   Both apps work well and are fairly similar really and both get the job done. I don't see one as better than the other at this point as they both basically do the same thing and display the same info.

To install the Amazon app you must enable the installation of apps from unknown sources (in other words not from the Google Market), which Amazon’s easy instructions will walk you through and which means AT&T users are out of luck right now as AT&T doesn't allow customers to make this decision.   Reportedly AT&T and Amazon are working on a solution to get the Amazon Appstore to AT&T users that want it in the future.   Conversely folks who are using pre Android 3.0 Honeycomb tablets (like the $100-$300 ones from generic manufacturers) that can't get access to the Google Market without rooting now have a decent app store available to them if they're in the US anyway.   It also installs on the rooted Nook Color and works fine.

That brings up something that will undoubtedly annoy and baffle some users, that's right the Amazon Appstore is US only at this point. I have no idea what the reasoning behind this is.   Amazon has been known to start new things out US only before opening them up after making tweaks to the initial release and perhaps that's what's happening here.   I have read information saying a version of the store for Amazon UK is in the works.   While the Appstore for is currently only available in the US I'm told that changing your billing address to a US address (Yankee Stadium is popular) will allow the "purchase'   and download of free apps (including the daily free app).

Another thing you can't do with the Amazon store is return an app.   With apps from the Android Market you have 15 minutes (used to be 24 hours) after purchasing to request a refund, this allows you to try the app a little and also make sure it's working on your specific device.   Hopefully Amazon will implement some kind of policy similar to Google's although longer than 15 minutes would be nice.

While Amazon's Appstore doesn't beat the Android Market at this point, overall they're fairly even, it has the potential to outshine Google at its own game.   Maybe with a little time Amazon's store with its testing and approval processes will turn into the go to place to get apps.   A place between the sometimes strict and strange approval process of Apple's iThing apps store and Google's wild west anyone can come shop.

Where does the Amazon Appstore rank from a readers perspective?   In a word poorly.   They of course have the Kindle app, along with Kobo and Moon +, but that's about it.   No nook, no Borders, no Aldiko, no Overdrive so for reading apps, at this point anyway the Android Market is the place to go.

Since we're talking Amazon, I'll also make a brief mention of their new Cloud Drive service (and Cloud Player) that launched on March 29th.   Amazon is giving you 5GB of space for free and for US users who buy an album from their MP3 store you’ll get upgraded to 20GB for free for the first year. Users can also pay to upgrade their storage space at the rate of $1 per GB up to 1,000GB (space upgrades not available in all countries). I also tried the Cloud Player and used it to stream music to my Android phone and also to a web browser and it works as expected.   One nice thing is that MP3s purchased from Amazon from now on will automatically be added to your Cloud Drive giving you an automatic backup and they don’t count towards your space total (note I’d keep a local backup too just like I recommend with eBooks). This has the potential to be quite a nice service for folks who have a need/want to access their music from anywhere they can connect to the web, but how about other uses?

I was very easily able to upload a book and store it in my Documents folder on my Cloud Drive.   I was then able to login at https://www.amazon.com/clouddrive and use the Kindle's browser (works best in landscape view) to download the book. It's quite easy to download files from most devices with a web browser (tablet, phone, desktop/laptop, etc), but the real strength of the Cloud Drive right now is if you're going to use it with the Cloud Player.   For anything else I'd stick with DropBox or SugarSync at least for now.