A Tale of Two Technologies: A Mac User's Experience With The Sony Reader 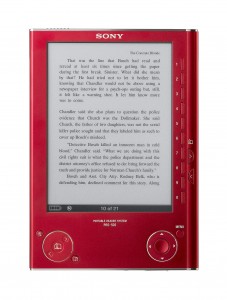 There are those people who own and covet many different types of devices simply for the love of the technology. I am not one of those people. Not that I dislike technology; I am, in fact, easily seduced by the lure of a cool new gadget. But my technological promiscuity is a result of happenstance more than anything else. I got my first ereading device (that wasn’t my laptop!), a Treo 650, because I wanted an ereading device that could also function as a phone, and the Treo was pretty compatible with my Mac. Then, more recently, I got an iPhone because a dear friend of mine upgraded from the first generation device to the G3, and she generously gave me her old phone (and I use the term "old" loosely, as it looked like a brand new phone!). And my Sony reader came to me because of Jane and Ned’s (and SB Sarah’s) ingenuity and interest. So here I am with four ereading options, none of which is perfect, but all of which offer certain unique strengths.

Because I am a Mac user, I am constantly having to adjust to the fact that the ereading market is not set up to accommodate easily my technological needs. I can read some docs on my Mac laptop and my iphone and my Treo that I cannot read on my Sony. Other documents cannot be read on my Sony or my Mac or iPhone, while others can only be read on my Sony but cannot be downloaded to the device from my Mac. This is frustrating, frankly, more so because I do not understand why Mac users are still marginalized in this new technological development. I realize that if I got a Kindle, I could simply download books from the device, but then I’m still locked into format and device, as well as vendor, which makes it, ironically, the least attractive option for me at this point.

While I understand that Apple represents a proportionately small percentage of the PC market, I have the sense (totally anecdotal) that a number of Romance readers online use Macs, and I frankly wonder whether the percentage of Mac users in this community isn’t significantly higher than in the population at large. And I further wonder whether the company that creates a device that works as smoothly with the Mac as with the PC won’t make a mint by being the only dedicated Mac-friendly ereading device. While that market has not yet been filled by Apple itself, in something as potentially revolutionary as the iPhone, I am totally baffled and disappointed by the lack of hardware options for Mac users. Because with the way things are now, the minute Apple comes out with a dedicated ereading device, I am so there! As it is, I am very grateful for the existence of Calibre, which has, single-handedly, transformed my initial experiences on the Sony from okay to great because it so fundamentally helps me translate between the Sony and the Mac. For those Mac users who do not have easy access to a PC and who want to experience the Sony reader, I cannot emphasize enough the importance of Calibre. That it was developed independently, though, highlights again how little Mac users are thought about in the ereading device market.

I know this is supposed to be a post about my experiences with the Sony, but I needed to make clear that there is just a different context for me than for the other DA reviewers, and that the context impacts my experience in positive and not so positive ways. The challenges are, as I have said, primarily in format, download, and conversion (device and format compatibility issues, in other words). And I am still struggling with this, not only in learning how to optimize my understanding of Calibre to work with the Sony, but also in strategizing a way to get Windows on my computer so I can authenticate my reader at the Sony site, use the Sony store, and set up Adobe Digital Editions on my reader so that I can access the books I read on my Mac in that format. So in that sense, I am probably a lot farther behind my fellow reviewers in utilizing my Sony to its fullest.

That said, let me tell you about all the things I love about my Sony, because there are things I love so much that I am dedicated to figuring out how to make the Sony my primary reading device.

First of all, most of all, there is the e-ink. As someone who had been reading ebooks on other devices before I received my Sony, I thought I understood what I was in store for with the Sony. Not so. I did not expect the crispness, clarity, lack of glare, and most of all, lack of stress on my eyes that the Sony allowed. I can literally read for hours upon hours and not get the least bit eye fatigued, which is amazing, since I routinely put a lot of strain on my eyes. By the end of the work day I often feel like my eyes are filled with sand and my head with rolling rocks. And yet, if I pull out the Sony to get a few chapters of pleasure reading in, I can log a lot of pages without even noticing how much time is passing. In fact, the experience of reading on the device is superior to that of reading paper pages, which have a glare I never noticed until I had the pleasure of the e-ink.

As for the device itself, as a left-handed reader, I appreciate the way the buttons and switches are positioned. I often hold my reader with my left hand, using my thumb to navigate through pages with the left-handed toggle, which is very, very convenient for me. And if I get tired of doing that, I can easily use my right hand to turn pages using the small buttons on the right hand side of the reader. I an easily turn the device on and off with my right hand using the top switch, and because the weight of the reader is evenly distributed through the device, I can hold it in either hand without either hand or wrist getting disproportionately tired or sore. My longish nails sometimes overshoot the right hand page buttons, making me hit one of the numbered buttons, but hitting the little "menu" button disengages me from the search function easily. I have yet to experience any significant problems with the positioning or the functioning of the buttons, and I am especially fond of the bookmarking button, which is easily accessible with my left thumb as I’m holding the device with that hand. I do wish the 505 had some kind of underlining or highlighting function, as I sometimes forget what I’m bookmarking a page for (and I hate hate hate hate taking notes while I’m reading fiction), but it’s certainly not a deal-breaker for me. Ditto with the slow page turning, which I frankly only noticed after others started commenting on it. Yes, a more rapid page change would be welcome, but since I’m generally not racing through a book, it’s not terrible.

My only real points of curiosity about the 505 have to do with the charging and the case. First, as others have mentioned, it’s inconvenient to charge the device with the USB cord and not be able to use it at the same time. And I don’t understand enough about the technology to know why this has to be. Yes I could buy the wall adapter, but I haven’t yet been willing to spend the money. As I use the reader more, that might change. Second, I wish the case had a pocket inside, as well as storage for an SD card besides the slot on the machine itself (or for the dummy piece that comes in the slot when you receive the reader). Quite honestly, it’s taken me a while to get used to the whole cover thing, because while I understand the need to protect the reader from being banged up or scratched, the cover just feels clunky and superfluous while I’m reading. It just doesn’t seem to me that there’s a natural marriage between the device and the cover. And the color of the cover is far, far less attractive than the color of the reader itself.

But those are small inconveniences in the face of the impressive e-ink presentation of the Sony, the beautiful red color of the device, the ease of functionality while reading, and the generous size of the screen, which easily beats every other device I use except for my laptop. I look forward to using the reader more as I adapt further to the technological necessities of conversion and Windows accessibility, and I hope against hope that someday we Mac loyalists will not be second-class citizens in the ebook revolution.