A human chain to move books – How do you get a lot of children’s books from here to there? By hand, of course. Well, they could have been transferred by the boring method of boxes and trucks but thousands of citizens of Norman, Oklahoma turned out on a Sunday ... more >

Ebooks are not ‘stupid’ – they’re a revolution – I’ve been thinking a lot about the excellent comments to Monday’s news post, and in particular the interview with Hachette CEO   Arnaud Nourry, and I think this response from author Erin Kelly echoes a lot of the points you all ... more > 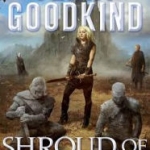 Terry Goodkind Apologizes to Artist After Trashing Cover to Own Book – When Terry Goodkind called his new book cover “laughably bad,” he was in no way insulting the cover artist. Of course he wasn’t! Who would ever think that?! If you believe his lame “apology,” he was really criticizing ... more >

In Harlequin’s new Dare series, heroines own their sexuality – In general I’ve found it’s better to ignore some of the most ignorant pieces on the Romance genre – because why get riled up over people who don’t, won’t, and don’t even want to get it? But I made an ... more >

What can we learn from Marie Stopes’s 1918 book Married Love? – Rafia Zakaria discusses Stopes’s book, which was published in the era of the First World War – a year before The Sheik – and tackled the issue of sex in marriage. Like much Romance fiction, past and present, Stopes ... more >

Wednesday News: Read to a Dog with the Paws to Read Program

A “lonely” dog named Sting now has people to read to him. After his owner posted on social media that no one had signed up to read to Sting one evening, the post went viral and Sting is now going to have plenty of company. The post went viral, netting ... more >