If you remember, I had that brief and tear filled encounter with the Microsoft Surface Tablet which I had bought primarily because I needed access to Microsoft Word on a more mobile device than my laptop that lasts all of about two and a half hours. My iPad can chug along for a whole day and even if it does run out of battery, I have a couple mobile battery packs that can extend it’s life.

Not so for my laptop. I should note I tried the HyperJuice battery for MacBook Airs and it stopped working after a year. I looked into buying a replacement but the cost put me off as well as the fact that the new battery packs require some kind of surgery because of Apple’s patented mag adapter.

I’ve tried a number of paid and free apps from Docs to Go, Cloud On, and QuickOffice. None were a suitable alternative. When Word for iPad was launched, I signed up immediately. It didn’t matter to me that the subscription cost was $99 a year.  I pay that for Google storage. And Dropbox. And makeup subscription services. And God knows what else.  The price was acceptable for me.

But let’s talk about the price because for many that’s a huge sticking point. I’ve seen a number of people say that Pages is free! And it is. For every new Mac purchaser, you get a free version of Pages, Numbers, and Keynote. The Apps for the iPad are $9.99 each.

But what do you get with your subscription service? You are allowed to install the full versions of Word, Excel, PowerPoint, OneNight and Outlook on up to 5 laptops, Macs/PCs and up to 5 tablets (Windows or iPad) as well as any number of smartphones. Additionally, you can share your subscription with four other family members who get their own OneCloud storage of 20 GB and the ability to install the programs on their own computers, tablets, and smartphones.

The thing I liked about this is that you could have one iPad and multiple users. My husband can use his account to access his Office documents and I can use the same iPad to access my own set of Office documents merely by signing him out and signing into my own account. The lack of profiles for iPads have been a real problem that Apple appears to have no interest in resolving.  Their solution, I think, is just to require people to buy a separate iPad for each individual.

There are a few lower cost options:

So yes, this is an ongoing cost and for everyone it might not be worth it. I personally love the App because my day to day work is done only in Word (thus my buying the MS Surface Pro thinking that it would be the right alternative for me).

First, the App is obviously designed by iPad and Mac users rather than the Microsoft software team. I say this because I’m still haunted by the horrible user interface of the MS Surface Tablet. The same people who are behind Office for Mac developed Office for iPad.  They are a bunch of Apple lovers within the MS kingdom.

Second, if you work with a team of individuals and they use comments and review, there was no way that you could use Word on your iPad. Only one program I could find incorporated comments (Cloud On) and for long documents, it was virtually unuseable requiring you to be “always connected” and crashing frequently.

1) Getting Word docs on your iPad.

There are two easy ways to do this. First, you can email yourself the document and use the “Open In” feature. Second, you can drag something to your OneDrive folder. OneDrive is Microsoft’s cloud storage. Do I wish I could use Dropbox? Of course, but Pages doesn’t allow you access to dropbox either unless you know how to turn your Dropbox into WebDAV.

I usually use OneDrive because it’s easy for me to drag and drop copies into my work folders I’ve created.

You can use the “Open In” feature from any app like Dropbox but you’re only allowed to save to the cloud or email the document to yourself (or your collaboration partner).

2)  What can you do with the documents when you’re done? 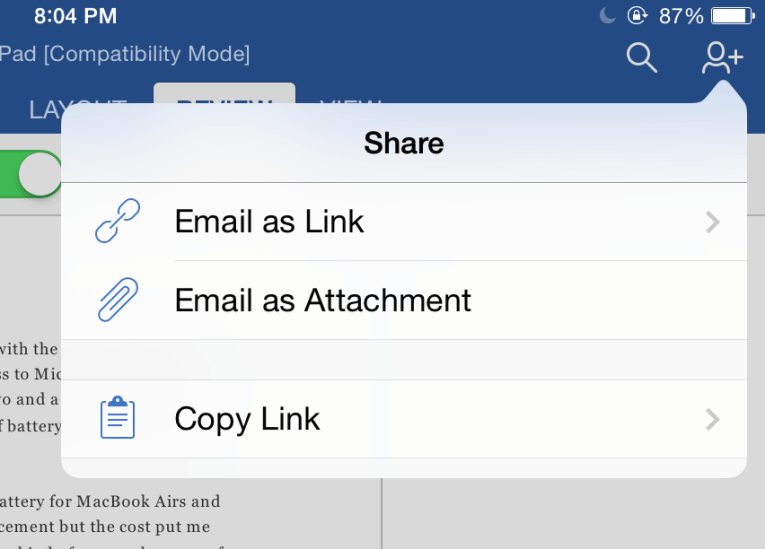 This is the biggest limitation for iPad for Word. You cannot print directly from the iPad. Instead, you must either email yourself the document or a link to the document. You can’t save it in Dropbox or any other cloud service but One Drive.

3) What can you do inside the document?

Most anything you do with a main installation of Word.  I’ll address each ribbon separately. 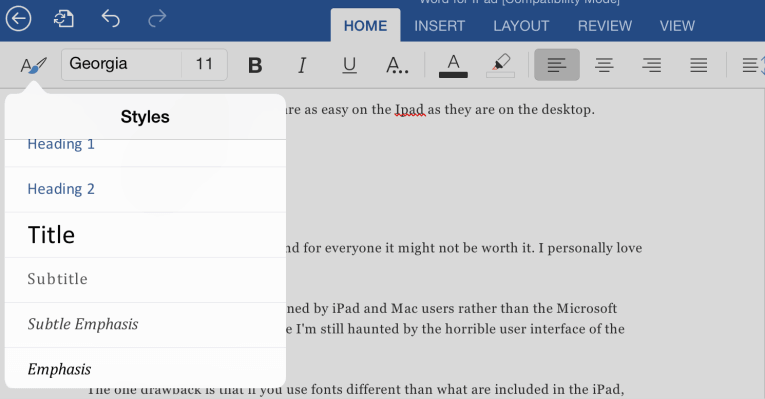 Home is your basic formatting ribbon. From here you can apply one of fifteen present styles but you cannot add new ones. If you open a document that has new styles, Word for iPad will recognize them and preserve your formatting but the only way to use those new style is to copy the paragraph with the style and use the “Paste Format” feature. Not very useful.

However, you can change font, bold/italicize, underline as well as strikethrough and a host of fancy text effects. For Footnoters, the superscript and subscript are located in a dropdown menu here. 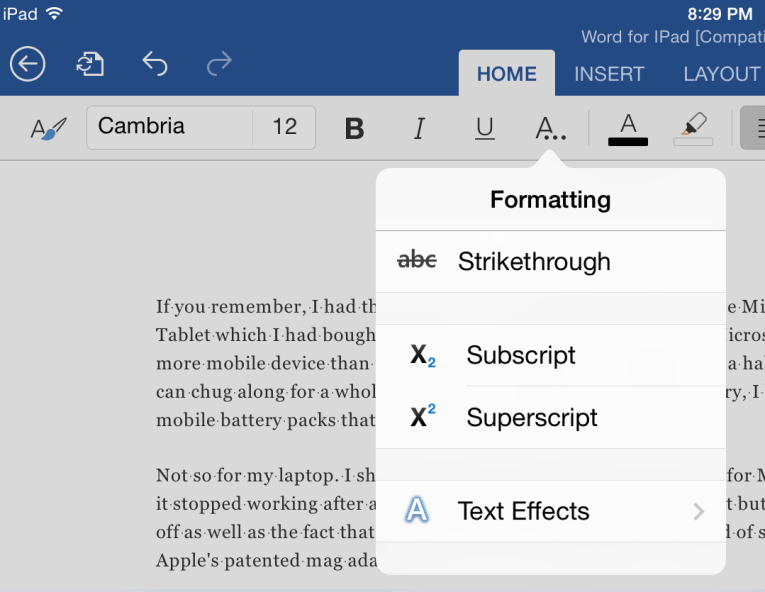 Also on the Home ribbon is justification as well as line spacing, bullets and numbered lists, and indents. The last item is show formatting. 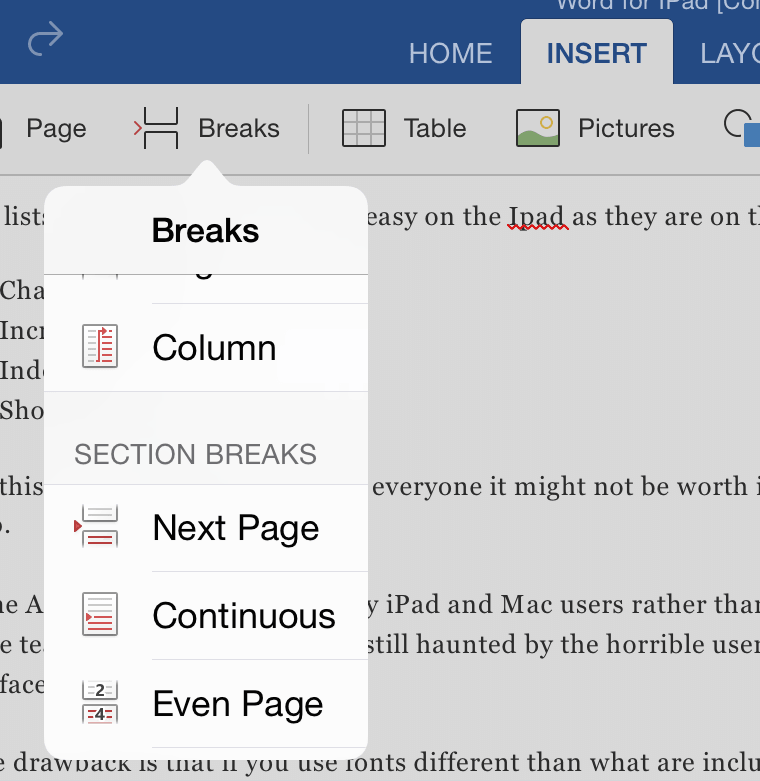 There’s a full set of breaks including section and column. Inserting a table is fairly easy. If you tap a button, it gives you a 3×3 table and a new ribbon just for tables. Use a light touch when highlighting and dragging but it’s fairly easy to modify and format the table.

You can also insert Pictures from your camera roll, draw shapes, insert a text box and a hyperlink. Honestly I have never used these features in Word because while pictures make great exhibits, they are frowned upon in briefs. (Although I did include a timeline once which I felt helped me win an important motion).

For Footnoters, this is where you add a footnote. 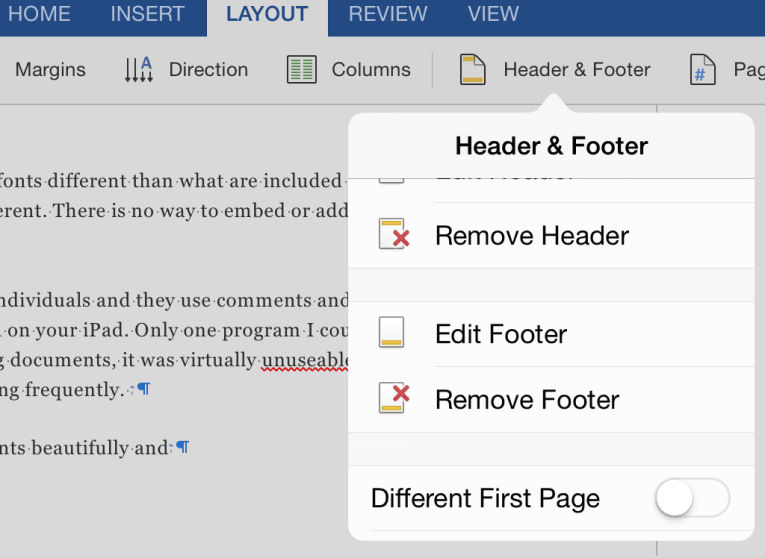 In the Layout section, you can change your page from Landscape to Portrait as well as setting the size of the page and the margins.  The text can be redirected to rotate 90 degrees. You can insert columns as well as a header and footer and page numbers. 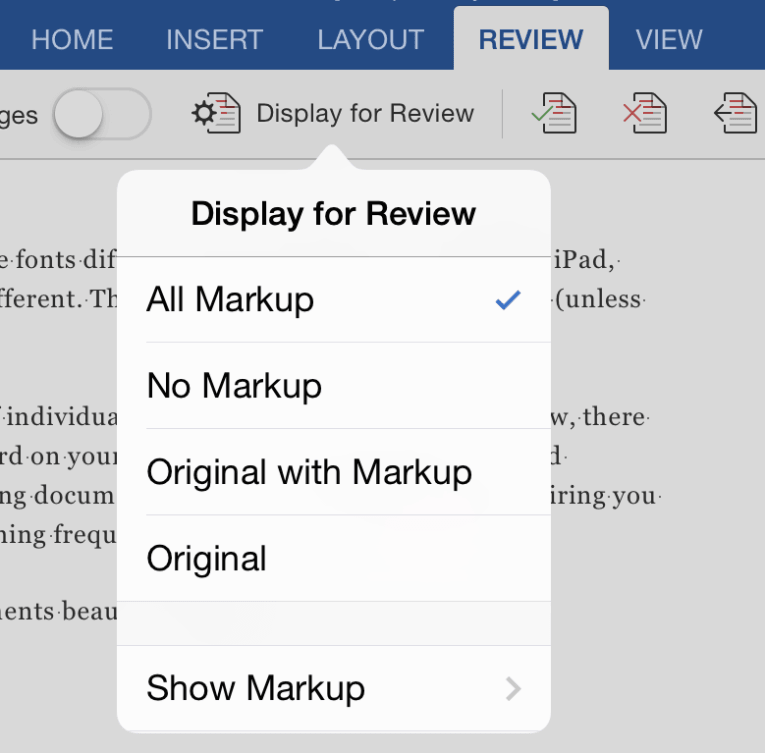 Word for iPad displays comments beautifully as well as preserving almost all formatting. It tracks your changes, and gives you the full review pane.  I was able to edit a Word document from my office team in my bathtub. That was just not possible before Word for iPad.

You can view the document with markup, no markup, original with markup, or just the original. You can even block authors (for ease of editing, not because you’re unhappy with them–although I guess that’s a consideration). 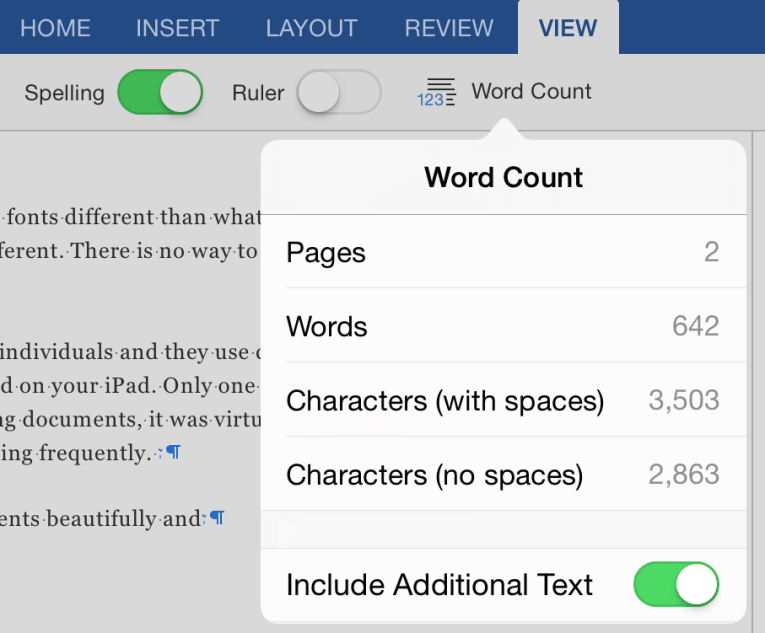 You can toggle the ruler on or off, look at your word count and toggle the spell check.

4) What can’t you do inside the document?

I was disappointed that there was no Table of Contents. You can see your formatted Table of Contents but you can’t edit or add to it. I hope that is something that gets added at a later date. Endnotes (which I don’t use but researchers do) as well as captions and citations (another researcher tool) can be viewed but not created. I have to believe that is coming because Footnotes are included.

There’s no grammar or auto text.  Auto text is a big deal for me and I hope to see it added later. I use autotext a lot to insert words and series of letters that I’m too lazy to type out like N.W.2d or Iowa R. Civ. Proc. and stuff like that.

You can’t save as a doc (for backwards compatibility) or PDF and you can’t print.  You can’t save to Dropbox or GoogleDocs or any other third party storage system.  You can’t, if you’re an author, send a book to “Epub” (not that you can do that with MS Word nor is that advised).

There are no scripting tool and no ability to use macros.

But for all it’s flaws, Microsoft created a beautiful and functional app that allows me to edit my work documents anywhere, anytime. And that’s priceless.