Published in 2015 and awarded the Nebula for best novel a year later, Uprooted is the coming-of-age story of Agnieszka, a girl from the village of Dvernik. Every decade, a wizard known as the Dragon, takes a girl from Agnieszka’s valley as payment. Because Dragon is all that stands and the powerful, dangerous nearby Wood, they comply. 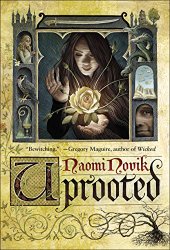 Agnieszka has grown up all her life fearing the loss of her best friend, Kasia, whom everyone expects the Dragon to take. But when the Dragon comes, he takes Agnieszka instead. And that, as it turns out, is only of many obstacles that Agnieszka will face in her battle with the Wood.

Uprooted was previously reviewed for DA by Jennie, who gave it an A- grade. I liked certain parts of this book a whole lot, but it felt a bit uneven. Agnieszka’s adjustment to living in the Dragon’s tower, her learning to utilize her magic, her relationship with Dragon, and the resolution of all these conflicts were terrific. The ending was one that I absolutely loved. I also adored her relationship with Kasia, her friend. This book passed the Bechdel test in spades. The worldbuilding was excellent, too. Novik has an impressive imagination, and I like her prose style as well.

On the down side, the Wood, the story’s chief villain / antagonist, was so pervasive and powerful that it made Uprooted feel somewhat oppressive. The battle scenes dragged to a point where they started to feel gratuitous. There is a section where Agnieszka goes to the capital city and she’s so disinterested in the political stuff that it’s not presented in a very compelling way. I usually like political intrigue in fantasy novels but here it felt like she had no ability to change anything and therefore it was a little too easy to see what would happen. Overall, I give this a B.

Dina Demille is an Innkeeper, but not a regular innkeeper. Her inn is a magical place, open to alien space-farers. Dina can alter the shape and dimensions of her inn, and her broom is secretly a powerful weapon. When the dogs in Dina’s neighborhood start dying, attacked by a mysterious, monstrous creature, Dina asks the local werewolf, Sean, to step in. 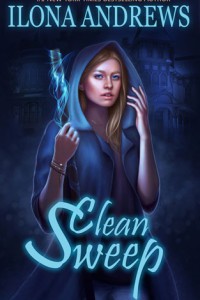 Sean does, but not quickly enough to suit Dina, who is forced to shed her innkeeper’s neutrality to protect her neighbors. Soon after, a contingent of space-faring vampires arrives, and they want something Dina has. Their enemy is the same person behind the predators stalking Dina’s neighborhood, but their leader is stubborn, and cooperation will not be simple or easy.

Sirius reviewed Clean Sweep for DA, and gave it a B+. I’ve wanted to read the Innkeeper series for a while because I heard that George and Jack from the Edge books are in it, and I loved them so in those books. I did spot their cameo here, but it was very brief. Most of the book is about Dina, Sean the werewolf and Arland the vampire, and for the first half I wasn’t very engaged. There was some humor but not quite as much as in most of Andrews’ books.

I also didn’t care much about the romance. Sean’s initial response to Dina’s request that he protect the neighborhood is to mark his territory much as a dog would. This turned me off of Sean for quite a while (late in the book he started growing on me again). Arland was too smooth, though, so I didn’t ship him with Dina either. The relationship I like best may have been Dina’s with her dog.

Dina was a character with strength and heart, and things finally got interesting and exciting in the book’s second half, when Dina went supermarket shopping. But all in all, Clean Sweep could have been more eventful and entertaining. It may have just been my mood, but I didn’t find the humor as funny as I often do in Andrews’ books. C+.

A Darker Shade of Magic by V.E. Schwab

This first novel in Schwab’s Shades of Magic series has four versions of our own world that share only one major point of commonality–each has a city named London. Kell, the first character we meet, is one of only two Antari, people capable of moving between worlds. The other, Holland, is in a different London than Kell’s. 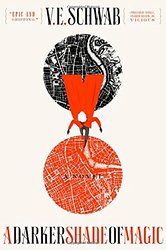 Kell’s London, Red London, has magic in balance and is therefore prosperous. In Holland’s London, White London, magic is rarer and seen is something to be conquered or subjugated. The other two Londons are Black London, which had to be sealed off centuries ago due being overrun with powerful magic, and Grey London, our own London in the Regency era.

Kell is not permitted to bring anything across the worlds except letters from the monarchs, but he breaks this rule. An understandable reason is given for this. When he was a child, dark magic was used to erase Kell’s memory, and he was then adopted by the king and queen, but Prince Rhy, the heir to the throne, is the only member of his family whom Kell feels truly loves him.

On one trip to White London, Kell accidentally ends up in possession of an artifact from Black London– a powerful but dangerous black stone. He doesn’t realize what he has until he is back in Red London. Shortly afterward, he is knifed in an ally by people who want the black stone. He escapes to Grey London and that is where he meets Delilah Bard, aka Lilah.

Lilah, a cross-dressing thief, dreams of being a pirate on the high seas, of adventure and travel, while in reality she often goes hungry and is hunted by the police. But when Kell appears in the same alley she’s in, their meeting has momentous consequences not just for them, but for two of the Londons.

The worldbuilding in this book was really wonderful and perhaps the best thing about it. Despite their contrasting differences, the Londons felt complex enough to be real. The protagonists were likable as well as flawed in interesting ways. Kell has led a sheltered life and for all his knowledge of magic, he is not prepared for having to fight for his survival. Lilah knows a lot about how to survive, but nothing of magic, before they meet. I liked the contrast between Lilah’s cynicism and Kell’s relative innocence. They make a good team, but their opponents are more powerful than they are, even together.

I would have liked to see a little more relationship development and political stuff than there was, and I also wish that the author had dug deeper into her characters. Still, I enjoyed the novel enough that I will probably read book two. My grade for A Darker Shade of Magic is a B/B+.

Rogue One: A Star Wars Story

I saw this prequel to the original Star Wars in the theater some weeks ago. Jyn Erso (Felicity Jones), the movie’s heroine, is the daughter of Galen Erso (Mids Mikkelsen), Empire scientist whose conscience led him to drop out and become a farmer. When the movie begins, Jyn’s mother is killed as her father is retrieved by the Empire to build what will be the Death Star. Jyn is raised by Saw Gerrera (Forest Whitaker). 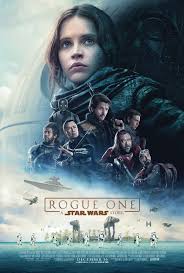 As an adult, Jyn is a cynical smuggler in the early Han Solo’s vein. She is freed from prison by the Rebels, who recruit her for a desperate mission led by Cassian Andor (Diego Luna). Jyn’s goal is to find her father and extract him from the Empire’s claws, while Cassian has been ordered to kill him. But Galen has plans of his own.

I enjoyed this movie as much as The Force Awakens. The cast here is good as well as diverse, including, in addition to Luna and Whitaker, Riz Ahmed as Bohdi Rook, a former Empire pilot who joins the Resistance after a traumatizing interrogation, martial artist Donnie Yen as Chirrut Imwe, a blind warrior monk, and Wen Jiang as mercenary Baze Malbus. And let’s not forget that the hero is played by a woman.

In some ways, Rogue One’s prequel status frees the movie to tread somewhat less familiar ground. Because we’re not catching up with beloved characters a generation later, the protagonists don’t have to face a journey that involves choosing between the light and dark sides of the Force yet again, or destroying yet a third Death Star. The Death Star does feature in this movie, but in a different way.

Going in, I had read a spoiler about the ending, so I knew what to expect. Partly because of that, and partly for narrative reasons, it didn’t feel as depressing as I’d feared. This was a fun, entertaining film, and though it hasn’t stuck with me that much, I enjoyed it. B-.