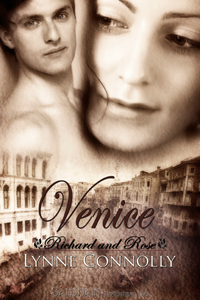 Forget anything I’ve ever said about British authors not writing enough sex scenes. In VENICE, you’ve finally gotten your two protagonists married and they’re off for their bride trip to beautiful, golden Italy. Only they have a slight problem. Two actually. Someone is trying to kill them and impostors have stolen their identities.

From the back blurb:

The third book in the Richard and Rose series shows Venice in all its glittering magnificence as well as its dark side.

When their wedding day nearly turns to tragedy by an assassin’s bullet, Richard takes no more chances with his beloved Rose. They will travel incognito to Venice.

Venice is as full of knaves as London. Two of the villains mark Richard and Rose as their particular quarry. Do they hold the key to the assassination attempt or are they playing a deadly game of their own?

Once again we can see that you’ve obviously done your research into everyday life of the Georgian period and it’s displayed so nicely one is never even aware of it. When they discover the impostors, Richard and Rose decide to have some fun stringing them along and take the personas of a middle class wine merchant and his wife. Thus we can see the subtle nuances and differences in the two social stations in life. I love how you show this in the aspect of clothes. Dresses Rose would once have considered perfectly acceptable she now knows are far below the quality of those Richard provides for her.

In addition, your love for the city of Venice shines through on each page. In the afterward,

you mention it as being one of your favorite places and its golden beauty wraps around one while reading.

And I did mention this is a bridal trip? Richard and Rose get to explore the full depths of their physical love for each other and since they’re staying in a small (by aristocratic standards) apartment, little of this is hidden from anyone. Just one more thing for Rose to accustom herself to in her new life as a beloved wife of a powerful and wealthy English peer.

There are some nice secondary characters, many of whom we’ve seen in previous books and as I’ve mentioned in other reviews, the characters don’t act like modern people in side hoops, knee britches and wigs. If I wondered a bit about the villains of the book and their powerful desire for revenge, it was made up for by the fascinating view of a distant world and two people deeply in love. B

Edited to add: the first four books in the series plus two new ones are supposed to be released by Mundania Press. The releases were to have started already but have been held up due to health problems of the editor there.

→ Jayne
Previous article: Non Sequitur of the Week: Why there are so many virgins in romances
Next Post: REVIEW: The Marriage Spell by Mary Jo Putney