Tuesday Night Links Round Up: Jessica says categories are the Iron Chef of romances 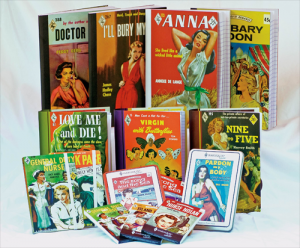 Harlequin is going to allow us to purchase the vintage cover paper goods. Woot. I am ordering some of those matchbook notepads and some of those little paper booklets and postcards and WHERE IS MY COFFEE MUG??? Seriously, Harlequin heard our voices, you guys!

It’s Western Week in blogland. Kristie J started it off.

First off, I’ll start with why a Western. I’ve always been more a fan of "blue collar" type heroes then the "white collar" type. I just love a hero who works with his hands and isn’t afraid to work up a bit of sweat now and then. I love a hero who is willing to labour for everything he has rather then just inheriting it. And no one works harder then many a Western hero, whether it’s being a marshal, a cowboy, a gambler, a gunslinger or even a reformed outlaw.

And a Western heroine is one I can identify with so much easier. I don’t know if it’s my age or ’cause I’m more average myself, but while the girly girl in me likes reading about all the fabulous balls and dresses and things in Historicals set in Europe, I very much the ‘realness’ of the conflicts a Western heroine goes through.

Dear Author isn’t officially on the tour, but we are butting in because I have to tell you about Jo Goodman’s September release, Never Love a Lawman. I’m posting my review tomorrow along with a 10 ARC giveaway (one is a read copy, mine, but we want as many people as possible to experience this book). It’s MEN! HORSES! WOMEN! PIONEERS! (okay, not pioneers, but survivors nonetheless).

Wyatt stroked his black gelding’s even blacker mane. “You saw her, didn’t you? Was I wrong?” Raider shook his head and snuffled loudly. “That’s right. And if you still had your balls, you would have stood up to her.”

A digital reader is coming to the PSP but it’s aimed toward comic books. That makes marketing sense to me. The PSP has a 4″ screen. Click here for a closeup of what that might look like.

The Publishing Tidbits blog has a piece about Sony’s decision to drop its own proprietary format and go with ePub.

As Carl Shapiro and Hal Varian explain when discussing proprietary versus open standards, a company’s total reward is a product of the size of the platform and its share of that platform. By abandoning its proprietary file format and instead selling only ePub content, the company hopes to increase the size of its new platform by an amount that more than offsets its decrease in share. To do so, Sony must do two things.

Jessica blogs about the category in general and Kathleen O’Reilly’s categories in particular.

My favorite comment was Wendy’s, who said she loves categories because they give you "all of the romance, with none of the bullshit".

I totally agree with her on that. It’s cheeky to call secondary characters, subplots, worldbuilding, suspense, and fur, "bullshit" but I totally know what she means. I’ve already gone on record as saying that to me, the contemporary feels like the purest form of romance. … I have a lot of respect for category romance writers, because they have so much to do in so little time, with so many rules. It’s like the Iron Chef of romance writing.

According to this contribution on slashdot, 88% of consumer electronics exports are recycled and not dumped. I love hearing that. I don’t know how true it is though.