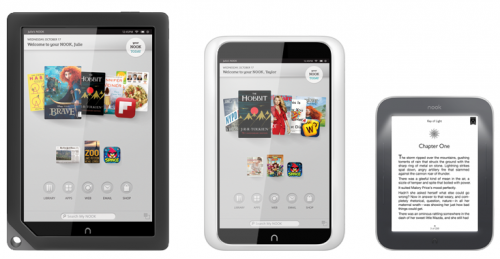 B&N announced two new tablets yesterday.  One is a 7″ and the other is a 9″ tablet. Their features don’t vary a great deal from the Kindle Fire or Google’s Nexus tablet but there is one stand out feature.  The new Nooks have profiles so that the family can share the same device but have access to different books, movies, apps and content.  This has been a feature I’ve been longing to have ever since my daughter started reading on digital devices. The devices ship on Nov. 1

Nate at the Digital Reader has some hands on impressions of the devices. (Part 1 and Part 2)  Of note is that BN appears to be going the way of Apple and introducing a proprietary charge cable which I absolutely hate.  I also wasn’t sure if there was any video out for the tablets.  IPad and the Amazon Fire tablets have video out.  Why is that an important feature?  Well, because you can buy the movie for your iPad and simply hook up the iPad to the TV and play the movie that way. Otherwise, the movie you bought on your tablet device is stuck on that tablet device for viewing.

The software, like Nate says, it what sets the Nook tablets apart from other devices but the content is limited.  B&N, for instance, has no music store unlike Apple, Google and Amazon.  It is unknown how robust the video store will be.  I’m a little disappointed we aren’t seeing greater technological strides. I’m not sure what I was expecting but something akin to what Microsoft was promising with its tablet announcements given that Microsoft made a multimillion dollar investment in the Nook.

Open-access deal for particle physics – Academic publishing is really undergoing a sea change and not just because of digital publishing.  But there is a feeling amongst scholars that research papers should be cheaper to access:

“The entire field of particle physics is set to switch to open-access publishing, a milestone in the push to make research results freely available to readers. Particle physics is already a paragon of openness, with most papers posted on the preprint server arXiv. But peer-reviewed versions are still published in subscription journals, and publishers and research consortia at facilities such as the Large Hadron Collider (LHC) have previously had to strike piecemeal deals to free up a few hundred articles.” Nature News & Comment

Jasmine is a Gorgeous, Free YouTube App for iPhone and iPad – Lifehacker recommends a different FREE app for those who love YouTube videos:

“Log in to your YouTube account via OAUTH, and the app pulls in your subscriptions, favorites, playlists, and even recently played videos. You can search by keyword, browse categories and popular videos—everything you would expect from a YouTube app. Jasmine even supports Airplay.” Lifehacker

In his elegy for Prince Henry, aptly titled Great Britaine, all in black, John Taylor incorporated not only a full mourning page, opposite a much lighter woodcut of Henry, but a kind of mourning title-page recto, backed by a second mourning block verso. To get the idea, you have to imagine how the pages are printed on a sheet, and pay close attention to the juxtapositions created by the openings. For instance, the white space in the title page was backed by another mourning page, dimming the contrast between text and border. d i a p s a l m a t a

E-Book Burning, Ctd  Is an electronic book easier to scrub from history than a print book? That’s the question that readers debated on Andrew Sullivan’s blog page. Columnist Maria Konnikova notes that Jonah Lehrer’s book Imagine has been scrubbed from all the retailers and suggests that this is problematic for readers.  But as readers at Sullivan’s blog noted, there were a sizeable number of readers who had already downloaded the book before it was recalled and it only takes one to crack the DRM and distribute it. Konnikova’s point shouldn’t be dismissed. There is a sense of impermanency about digital text. Items can be easily edited and updated. One of the most important parts of wikipedia is that every change or edit is documented. But we don’t have that kind of version history for everything. The Dish By Andrew Sullivan – The Daily Beast

→ Jane
Previous article: REVIEW: One Final Step by Stephanie Doyle
Next Post: 34. Study in Seduction, Reader Mail and the DOJ