The Wild Wonderful World of Wattpad from Ainslie Paton

Wattpad contacted me a while back to let me know that it had many romances on its site. They even curated a list for me! But I don’t know much about Wattpad and I tweeted that I was ignorant. Ainslie Paton (author Grease Monkey Jive and White Balance which I thoroughly enjoyed) contacted me and offered to write something up for the Dear Author crowd. So this is Ms. Paton’s experience with Wattpad! You can find Ms. Paton at her website, on Twitter, and on Facebook and even on Wattpad.

If you’ve never explored Wattpad, get ready to have your brain blown.

It’s the world’s largest community of readers and writers.

Wattpad is technology neutral, mobile, free, fast to embrace latest trends and memes, and organised around a social experience of serialisation and sharing content.

There are no editors, anyone can contribute and it’s a hotbed for pre-published experimentation.

Since launch in 2006, the platform has published more than 100 million stories in 50 languages. There are more than 35 million readers who spend on average 11 billion minutes on Wattpad every month, 85% of them using mobile devices.

And the most popular genres: romance, teen fiction and fanfiction.

Popular romances like Lostmushroom’s Romancing the Ice Princess and fedejik’s Loving Sebastian Greene attract millions of reads, 24 million and 23 million respectively, and as a consequence, the site is a breeding ground for pull-to-publish stories.

Wattpad is understandably a hit with millennial audiences. The majority of Wattpad readers are under 30 years of age. Almost half, 45% of Wattpaders, are 18-30 years old.

Wattpad is a never ending story for readers. There is an infinite variety of material from first time aspiring authors to published professionals and industry icons.

The secret thoughts of that shy fifteen year old next door, and your colleague’s grandma are on virtual shelf alongside Ruthie Knox and Margaret Atwood, rubbing shoulders with Dan Brown, Marian Keyes, Christina Lauren and Meg Cabot. 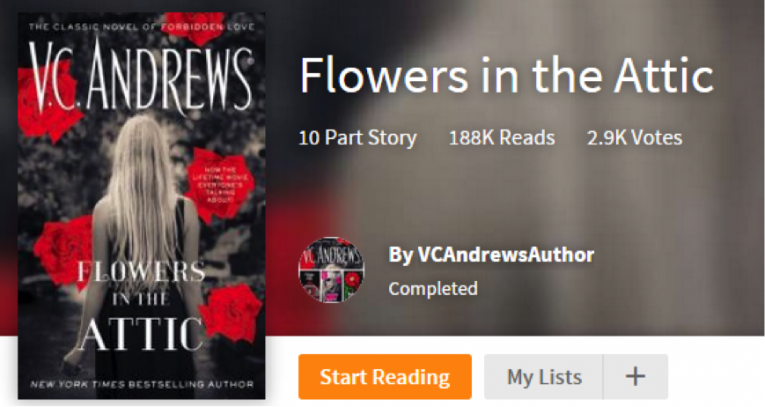 You can read the whole of VC Andrews’ Flowers in the Attic, or public domain classics like Wuthering Heights, Great Expectations, Emma, and Little Women.

You also get titles like Bring Me to 1D, Dimitri’s Point of View in Vampire Academy, Harry Potter’s Twin Sister, and Unexpected Love – A Tom Hiddelston Fanfic.

There are more than 15 million fanfiction stories and at least 50% of them are romances. Much of the content is boy band oriented, but if there’s a fandom, there’s likely to be a story or two.

In a break the internet headspin there is Fifty Shades of Grey fanfic, and fanfic for Anna Todd’s now traditionally published Harry Styles fanfic, After.

Outside of fanfic, romance themes tend to mirror mainstream romance publishing, but there is also content that is underserved by the traditional publishing industry including Muslim, urban and LGBT romance. There are also styles unique to Wattpad like short romances written in second person known as ‘imagines’.

Quality is understandably a variable. Name authors are generally delivering content of a similar standard they provide elsewhere, it might be a dirty draft, unproofed, a sample, or in a genre or form they don’t generally publish in.

A percentage of the popular fiction could be considered naive storytelling. It’s not uncommon to see a note from an author to readers asking for confusion to be forgiven, for readers to trust it will all work out in the end and to keep reading, for a hero given the benefit of the doubt, or details not to be final. Things you’d find difficult to get away with in the traditional publishing world, but fit with the Wattpad culture of creating iteratively in a live framework. (If I remember rightly Fifty Shades Freed included something similar in endnotes).

On the whole Wattpad stories in the romance genre could be considered storytelling high with a focus on popular tropes but with less attention to nuance, originality and highly variable technique.

And then you get the breakthrough original voices and stories that resonate high with readers like After.

After is for Wattpad what Fifty Shades of Grey was for Writer’s Coffee Shop, a phenomenon that outgrew its origins. After has had one billion reads, and was pulled to publish by Simon and Schuster in a deal said to be mid six figures, and acquired for film by Paramount.

Goodreads has a list of 46 now traditionally published novels that started life on Wattpad.

A 100 million stories is a mind-boggling amount of content. It stands to reason that the majority of those stories achieve only a fraction of the readership of the stories served up as most popular by the search engine, so the sheer amount of content is a selection nightmare, solved in part by the social network aspect of the site; you read stories from authors you follow, but Wattpad has also begun curating.

On Valentine’s Day this year, the company launched a new app that offers a curated reading experience for mature romance fans. Called After Dark, the app gives readers access to thousands of romances by bestselling authors including Colleen Hoover and Jennifer Armentrout. It was downloaded by more than 12,000 users in the first 10 days after release.

The Wattpad romance category has platforms on the site itself, and on twitter and pinterest to support cross platform connectivity.

Authors use the site for everything from pure creative expression to building an audience to convert to paying fans.

Wattpad is simple to use, allows for cross social media access and intra-site networking.

Authors start with an author page and then add ‘works’ in chapter format. They can also add cover art and video.

Many authors use the site to work with beta readers or to encourage reader feedback to help shape a story in progress.

Published authors use Wattpad to amplify their existing online presence. They post short stories and drafts, or attract new readers by sharing the first part of a series, or releasing a prequel, cut-chapters, or additional scenes on the site. To what extent that supports an author’s own marketing beyond name recognition in any real sense is a guess.

But to aid in the guesswork, Wattpad provides statistics. Every Wattpad story has data dashboard that provides a breakdown of readership statistics including the number of unique readers, votes and comments by chapter. There are graphs to illustrate engagement by chapter, making it easy to see where readers drop out of a story.

That doesn’t mean the two are mutually exclusive. The original chapters of After are still available, as are Ruthie Knox’s Truly and Deeper, Ali Novak’s My Life with the Walter Boys and The Heartbreak Chronicles, and Tijan’s Fallen Crest High.

Other authors experimenting with Wattpad include Kelly Hunter who is serialising a new novel, Gamer Girl. Hugh Howey posts essays and short stories, and Margaret Atwood has judged writer competitions on the site.

Escape Publishing, a Harlequin digital imprint, allows its authors to sample three chapters of a published work, a similar size of the sample download from an ebook retailer, on Wattpad. The publisher signed off on an anthology called, It Happened at Cafe Nix, designed for Wattpad by fourteen of its authors each writing a single chapter epilogue using favourite characters from a published work.

The Beauty of Wattpad is the simplicity of the publishing tool. Write and format straight into it, or copy and paste to it, and publish within seconds. And the audience of millions of active and engaged readers. Anna Todd has 753,000 followers. Kate J Squires has 71,000 followers. Ruthie Knox has 19,000, and Tijan, 9,100.

The later is also the tyranny. Wattpad readers are socially engaged, and the writers who prosper on Wattpad are the ones who embrace a direct social connection with their readers and fans and likely come to the platform having made a good head start developing social currency and a following.

It’s difficult for an author not already well connected socially, comfortable with a high level of reader engagement, or arguably, targeting stories to an under 30 age group, to generate a large audience.

Serialisation on a regular schedule, focusing activity around higher traffic weekend dates, and obvious audience engagement tactics such asking open questions and using quote art on other social media to drive traffic back to Wattpad, may not be enough on their own to lift reader numbers.

But then that’s not a problem unique to Wattpad as a publishing vehicle.

Want to breakout on Wattpad? The choice appears to be to write something genuinely fresh, or craft engaging fanfic under a cute pseudonym.

How About Those Huge Read Numbers

The read count is the number of times the story has been accessed by all readers.

If I read a chapter of Life After Marriage Book 2 by Intellectual212, twice, that’s two read counts for the chapter, as well as two for the total read count which currently stands at 1.6 million reads.

If I read all 75 chapters of Life After Marriage Book 2, I will have contributed 75 reads to the total.

If I check a chapter of my own uploaded story, I’ve contributed to the read count. So the explosively high number of reads on stories is a factor of both a large number of readers and repeat visits to individual chapters and stories.

Intrigued? It’s hard not to be. Wattpad is an easy to use digital platform that enables direct reader engagement at the point of creation unlike any other forum. (The imitators are coming see for example Tablo  and FastPencil. Both companies promise a Wattpad style experience with an added do it yourself publishing angle).

It has global reach, high frequency readership and is not bound by any specific literary or genre form of storytelling.

For a young writer, learning about story and technique, as well as the discipline of writing regularly and the heart-murmur of taking feedback, it’s a sensational training ground that’s anonymous and safe.

For an established author, at worst it’s a cool reading app to sample on and at best a venue to grow an audience.

And for readers it’s an ever changing trash and treasure chest of free entertainment because on Wattpad any kind of story could happen – and frequently does.

Note from Jane: Anything with a little green checkmark next to it (on the right, next to the date) means it’s a full-length completed story.