The Plagiarizing of Tammara Webber’s Easy by @JordinBWilliams

Edit x2: The book has been removed from sale on Amazon and BN.  Good job for reporting this everyone!

I love Easy by Tammara Webber and so do hundreds of thousands of other readers. Unfortunately, one Jordan Williams recognized this and thought, hmmm, I’ll just incorporate whole swaths of text from Webber’s famous and much beloved book.  Worse, Jordan William’s book is selling like mad. It’s 58 in the US Kindle store, as of this writing.

Obviously, I’m not going to point fingers without real evidence so here are the screencaps. 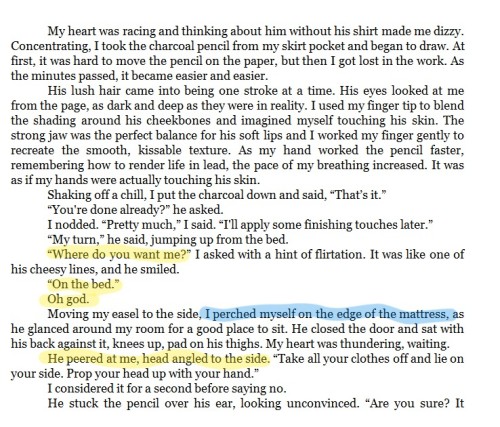 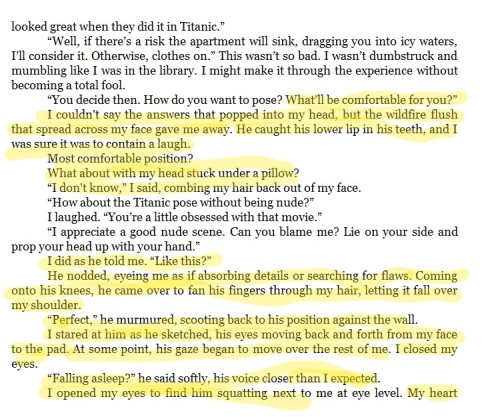 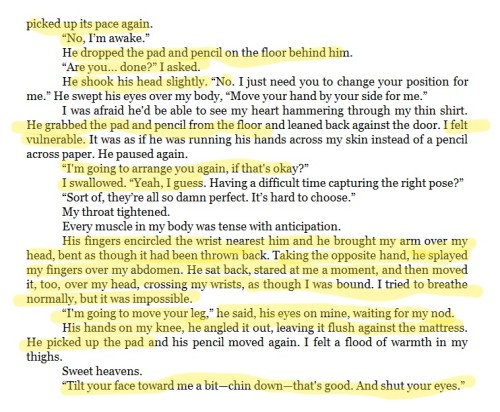 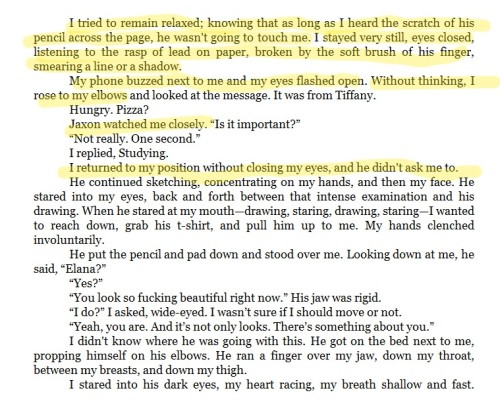 And from Tammara Webber’s book Easy:

The hoodie joined the cap, and his t-shirt fell back into place. Picking up the sketchbook and pencil, he turned to me, and I noted that the ink on his forearms continued over his biceps and under the short sleeves of his shirt.

“Where do you want me?” More breathless than I’d intended, my question seemed a brazen proposition. Wow. Could I be any more obvious? Maybe I should just come out and ask him if he wanted to be my Kennedy-rebound, no strings attached.

My insides went liquid from his ghost of a smile—the one that was becoming more and more familiar. “On the bed?” he said, his voice gruff.

Oh, God. “Okay.” I moved to perch on the edge of the mattress as he swept the hoodie and the cap to the floor. My heart was pounding, waiting.

He peered at me, head angling to the side. “Um. You look really uneasy. We don’t have to do this if you don’t want to.”

We don’t have to do what? I thought, wishing I could ask him if using me as a model was a pretense, and telling him that if so, it was a pretense he didn’t need to maintain. I looked him in the eye. “I want to.”

He stuck the pencil over his ear, looking unconvinced. “Mmm. What position would be the most comfortable for you?”

I couldn’t say aloud the answers that popped into my head at that question, but the flush that spread across my face like wildfire gave me away. He caught his lower lip in his teeth, and I was sure it was to contain a laugh. Most comfortable position? What about with my head stuck under a pillow?

He glanced around my room and went to sit on the floor, against the wall, facing the foot of my bed. Knees up, pad on his thighs, he was just as I imagined him in class the other day. Except he was in my room, not his own.

“Lie down on your stomach and rest your head on your arms, facing me.”

He nodded, eyeing me as if absorbing details or searching for flaws. Coming onto his knees, he moved close enough to fan his fingers through my hair and let it fall over my shoulder. “Perfect,” he murmured, scooting back to his position against the wall, a few feet away.

I stared at him as he sketched, his eyes moving back and forth from my face to the pad. At some point, his gaze began to move over the rest of me. As if his fingertips skimmed over my shoulders and down my back, my breath caught in my throat and I shut my eyes.

“Falling asleep?” His voice was soft. Near.

I opened my eyes to find him on his knees next to me, sitting back on his heels. My heart picked up the pace again at his nearness. “No.”

He’d left the pad and pencil on the floor behind him. “Are you… done?”

I rolled over slowly, afraid he’d be able to see my heart hammering through my thin sweater. He grabbed the pad and pencil from the floor and stood. Staring down, he let his eyes roam over me, and I felt vulnerable, but not in danger. I knew so little about him, but there was one thing I felt unequivocally: safe.

I swallowed. “Uh… sure.” My hands were clutched to my ribcage, my shoulders hunched almost to my ears. What, this isn’t how you want me positioned? I barely contained the nervous twitter that bubbled up at the thought.

His fingers encircled the wrist nearest him, and he brought my arm over my head, bent it as though it had been thrown back. Taking the opposite hand, he splayed my fingers over my abdomen, sat back, stared at me a moment, and then moved it, too, over my head, crossing my wrists, as though I was bound. I struggled to breathe normally. Impossible. “I’m going to move your leg,” he said, his eyes on mine, waiting for my nod. His hands on my knee, he angled it out, leaving it flush against the mattress.

He picked up the pad and turned the page. “Now tilt your face toward me a bit—chin down—that’s good. And shut your eyes.” I fought to remain relaxed, knowing that as long as I heard the scratch of his pencil across the page, he wasn’t going to touch me. I lay unmoving, eyes closed, listening to the rasp of lead on paper, broken by the soft brush of his finger, smearing a line or a shadow.

From the laptop on my desk, my inbox dinged, and my eyes flashed open. Without thinking, I rose to my elbows. Landon? But there was no way I could check.

Lucas was watching me closely. “Do you need to check that?”

Landon had ignored my email all afternoon, when in the past he’d answered so promptly that I was probably spoiled. But Lucas was sitting in my room. On my bed. I lay back, returned my arms to their prior position, and I shook my head. I didn’t close my eyes this time, and he didn’t ask me to.

He returned to sketching, concentrating on my hands a long while, and then my face. He stared into my eyes, back and forth between that intense examination and his drawing. When he stared at my mouth for long moments—drawing, staring, drawing, staring—I wanted to reach up, grab his t-shirt, and pull him down to me. My hands clenched involuntarily and his gaze flicked there and back.

Eyes blazing, he looked down at me. “Jacqueline?”

“The night we met—I’m not like that guy.” His jaw was rigid. 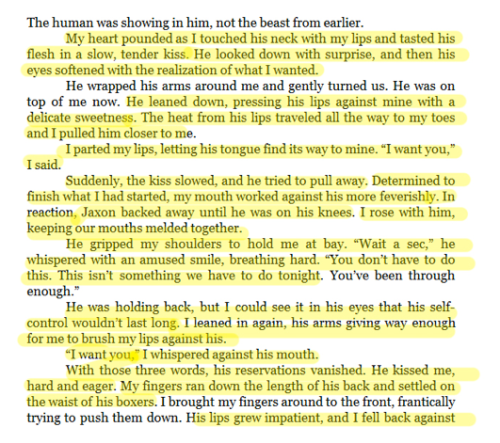 The weight of the grief we both felt was crushing, and an irrepressible need came over me to save us both. I lifted my chin, but hesitated; what I was about to do would change everything. I reasoned that Travis didn’t see intimacy as anything but a way to pass the time, and I shut my eyes again and swallowed back my fears. I had to do something, knowing we would both lay awake, dreading every passing minute until morning.

My heart pounded as I touched his neck with my lips, and then tasted his flesh in a slow, tender kiss. He looked down with surprise, and then his eyes softened with the realization of what I wanted.

He leaned down, pressing his lips against mine with a delicate sweetness. The warmth from his lips traveled all the way to my toes, and I pulled him closer to me. Now that we had taken the first step, I had no intention of stopping there.

I parted my lips, letting Travis’ tongue find its way to mine. “I want you,” I said.

Suddenly, the kiss slowed, and he tried to pull away. Determined to finish what I had started, my mouth worked against his more anxiously. In reaction, Travis backed away until he was on his knees. I rose with him, keeping our mouths melded together.

He gripped each of my shoulders to hold me at bay. “Wait a sec,” he whispered with an amused smile, breathing hard. “You don’t have to do this, Pidge. This isn’t what tonight is about.”

He was holding back, but I could see it in his eyes that his self-control wouldn’t last long.

I leaned in again, and this time his arms gave way just enough for me to brush my lips against his. “Don’t make me beg,” I whispered against his mouth.

With those four words, his reservations vanished. He kissed me, hard and eager. My fingers ran down the length of his back and settled on the elastic of his boxers, nervously running along the gather of the fabric. His lips grew impatient, then, and I fell against the mattress when he crashed into me. His tongue found its way to mine once again, and when I gained the courage to slide my hand between his skin and the boxers, he groaned.

We are going to do a compare and contrast for the rest of the book but many plagiarists include multiple sources.  This book needs to be taken down. Here’s the Goodreads link | Amazon Link | Author’s contact page

I did email the person who put the book up for publication but have not yet received a response.