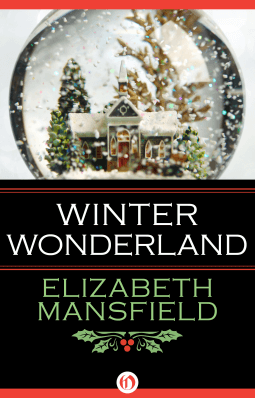 Is Christmas a time for forgiving and forgetting? A nobleman and the woman who spurned him are about to find out in this enchanting Regency novel.

For inexperienced, painfully shy Barnaby Traherne, the glittering society ball is akin to a battlefield . . . that is, until his attention is captured by an auburn-haired beauty. Scandalous rumors swirl around Miranda Pardew and now she has set her cap for a renowned rake. Ignoring the gossip, the already-smitten Barnaby gathers his courage and asks Miranda for a dance. When she rejects him—in a very public humiliation—he vows that when he reenters the fray, he will be better prepared. Eleven years later, he gets his chance, along with the opportunity to deliver to a certain haughty beauty her long-overdue comeuppance.

Once the belle of the ball, Miranda is now an impecunious widow. A stroke of luck lands her a governess position in Norfolk. Before she arrives, her stagecoach is ambushed by highwaymen, and Miranda finds herself stranded with an attractive stranger. She has no idea he’s the nobleman she rebuffed years earlier. But Barnaby has not forgotten her—and is shocked to discover that Miranda has been employed to look after his nephews. At his brother’s estate for Christmas, Barnaby tries in vain to conceal his still-wild attraction to Miranda, but a capricious fate conspires to throw Barnaby and Miranda together at every turn.

Sweet, shy Barnaby Traherne is mauled by a female shark his first time out in London at a ball. And not just any shark but Miranda Pardew the most beautiful woman Barnaby has ever seen and with whom he falls into puppy love. Unfortunately for Barnaby in this instance, he is doted on by his relatives including his sister-in-law Honoria who realizes too late that the crowded ton ball is no place to launch her beloved brother-in-law and Miranda is no female upon whom to try his wings. The public crash and humiliation are epic and Barnaby decides he’ll never be that socially inept and at the mercy of others again.

Eleven years later, Honoria knows her brother-in-law is still the sweet man underneath but her friends and the ton see him as icy cold and haughty. Many mamas have schemed and many debs have flirted in an effort to snag the now handsome and self assured man but none have succeeded. In fact many debs are afraid of his sharp wit and “suffer no fools” attitude. Poor matchmaking Honoria despairs of ever seeing Barnaby happily married. Well, say her friends then pair him with lovely Olivia Ponsonby who’s too shy to say boo to a mouse. Throw them together at a fortnight long holiday house party and surely Barnaby can be caught.

Meanwhile Miranda is in an intolerable situation. Widowed and left impoverished by her rakehell husband, her brother-in-law and his grasping wife are moving into the family London townhouse. She may be penny less but years of doing with almost no servants or money have trained her well and answering an ad for a governess sounds better to Miranda than a life of living with them.

That is until the journey north tosses her together with a taciturn man who seems to immediately dislike her. And that’s before they’re stopped and robbed by highwaymen. It seems to Miranda a little luck is on her side when she discovers that this man, Barnaby Traherne is the brother of her new employers but even after reaching their goal and meeting her three young charges, the youngest son of this boisterous family still shuns her. Well she is a servant now but everyone else is polite and she and her pupils immediately take to each other. Still there are times when she and Barnaby talk and connect and get on like a house on fire.

I can’t hold it against Barnaby or Honoria – who also recognizes Miranda – that they can’t forget how horribly Miranda acted towards him. But even with the perfect opportunity to snub her in revenge, to his horror Barnaby finds that some spark of the original attraction still burns. Can Miranda have changed? Can he face the truth of his feelings and how alive and challenged he is by her intelligence and forceful personality or will he settle for shy, placid Olivia?

This is a story of a shy guy coming out of his shell and a flamboyant debutante who was drunk on her social power but who has learned wisdom and kindness. I like that they’ve changed independently of the other. There was never any long standing grand plan to “show him/her!” When they finally meet again, yes there are old feelings to be taken out and aired, old hurts which have to be exposed and prodded in order to heal. I would have thought Barnaby a saint if he hadn’t held something of a grudge or taken a chance or two to get a few digs in. I also enjoyed how we see Barnaby’s large and loving family and how they rally round both him and, in the end, his and Miranda’s relationship. This is a feel good Christmas story with depth and emotion which spares the treacle. B