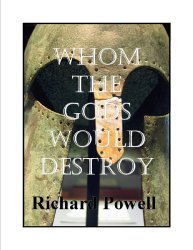 Two years before the Trojan War, Helios is eight years old and searching for an identity. He doesn’t know that he might be the son of the High King, Priam, and after Troy falls Helios’ quest for love and knowledge offer a new perspective to the aftermath of war.

I read this book years ago when I was a teenager and inhaling Edith Hamilton’s “Mythology” along with “The Iliad” and “The Odyssey.” It stayed with me over the years even though the title got blurry in my mind and my original paperback went missing. Then after my success in getting a copy of John Erskine’s The Private Life of Helen of Troy, I turned my sleuthing skills to finding this. One or two – or ten – false starts later, and success. Not only did I find it but it was available as an ebook! It starts off a little more slowly than I remembered but once the scene shifts to the Achaean camp, it kicks into gear.

The story is basically the tale of a young boy named Helios who might or might not be the illegitimate son of King Priam of Troy. Priam has never claimed him but then he hasn’t denied Helios either. His adopted father, a charioteer in the royal stables, teaches Helios some important lessons – namely never to deny his parentage, to withstand pain because life is pain and there will always be more where that came from and to handle horses. It is Polydextus who drives Hector (and Helios) out to greet his returning brother Paris and thus the young boy is one of the first Trojans to see the woman who will bring destruction to the fabled city.

Racing after the Trojan warriors who first head out to meet the Achaeans come to recover Menelaus’s wife, Helios gets a violent taste and rude awakening of the horrors of battle. He is captured by Achilles and through fate or the machinations of Odysseus, he becomes a companion of Neoptolemus and along with this son of the mighty warrior, he learns fighting and a few tricks from Odysseus who takes a shine to the orphaned boy. Sent with Neo to the island of Scyros they meet a granddaughter of Theseus who will make Helios’s life hell for years until the teenage boys return to the siege and almost cause chaos in their attempt to end the war. This scene is probably the best example of Powell’s subtle, deadpan sense of humor.

But the ten year war is barely half over then and further adventures and trials await Helios as he unexpectedly returns to a less than enthusiastic welcome from Troy and sees the other side of the politics that will keep this conflict simmering and then boiling before Cassandra’s horrific prophecies come true. Will Helios manage to survive the inevitable and bloody deaths of so many of the characters and the fiery fall of Troy and what about the young woman he’s never dared to imagine might be his?

Powell wove his story neatly among the threads of “The Iliad” as well as utilizing other ancient plays and legends along with modern research and discoveries. The famous characters come to life: unstable Achilles subject to his rages, blustering Agamemnon who has risen past the level of his incompetence, aged Nestor ever ready with ridiculous words of wisdom, brave Hector and aggravated Aeneas who doggedly defend Troy against the actions brought on them by pretty but cold Paris, beautiful (and intelligent) Helen who can easily manipulate any man but who falls under the spell of the one to offer her affection and wise Odysseus who struggles to keep everyone in line and who can’t help but become a father figure to young Helios in place of his longed for son far away.

Events are kept to the realistic and rational everyday with no hint of godly interference. The Trojan Horse becomes a believable instrument utilized by the Achaeans to finally end this never ending war and return to their homes and the fates in store for them. There’s even a hint of what might have been the cause of the downfall of the Achaean world leading to the Greek Dark Ages. Helios is brave, intelligent, honorable yet also fallible at times which keeps him from being merely a cardboard cutout. And there’s a romance. There are hints of it all along but be warned that it takes the whole book to finally get there. Yeah well, it was written by a man. B