Romantic suspense reviews are very hard for me to write. I don’t want to give away too much of the plot. Most of the time I either like them or I don’t. Often there is little character development because the story is so plot driven.  There’s little left to discuss.  I envy those mystery reviewers that can handle that delicate balance between reviewing the text and not giving anything away! 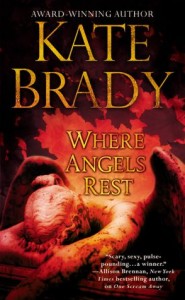 Erin Sims brother was imprisoned for the murder of the daughter of a Senator Her belief in his innocence has shaped her life.  She has spent nearly every available minute of her life running down new leads, new evidence.

Within minutes of Justin’s execution, Erin is given a stay of seven days to ferret out new evidence. (I found this a little incredulous but allowed it for the sake of the story). Erin believes that the real perpetrator is John Huggins, a man who had an affair with the deceased. She found evidence that he lives in Hopewell, Ohio, under an assumed name of Jack Calloway with his wife, a once up and coming artist who specializes in mask art.

Nikolaus Mann took the sheriff position in Hopewell to escape his own notoriety. His wife was killed and Nikolaus hunted down her killer and beat the crap out of him, almost killing him. Place on administrative leave, Nick believed the best thing for him and his daughter was to get away from the toxic LA environment, away from the sordid rumors, and seek refuge in this small town.

Needless to say, he has little appreciation for the mess that Erin brings to his door. Yet, Nick is stirred, not just by Erin herself but by the case. He was a decorated L.A. detective and the case is complicated. He’s intrigued and then caught because girls fitting the profile of the killer start disappearing and all signs point to Jack Calloway.

Erin is a fighter and Nick has spent most of his life being a rescuer. His first wife was a woman in need of protection. Her fragility is what attracted him to her; what attracted him to his profession. Yet, the world is a dangerous place and having suffered loss it is easy to see that Erin’s pursuit of justice; her fearlessness; and her ability to stand without him is an attraction he can’t put aside.

Nick is the character that has the most growth.  He’s been stagnating in Hopewell, hiding away and this new case stirs the passion that led him to be a highly decorated detective in LA.  Erin’s storyline is one of vindication so she has little emotional or character growth.

For romance readers, I think there is a good blend of the romance with the suspense although it takes some time to get started and they start from a point of animosity.  Overall, if a reader enjoys romantic suspense books, this will be satisfying.  B-