REVIEW: When in Rio by Delphine Dryden 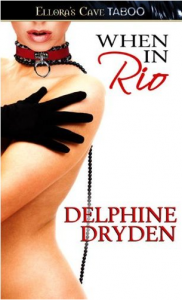 Katie Snow is an ecologist with Globe Oil (I know, too soon after BP?).   She works under Senior Vice President and Global John Benedict.   “Jack, to his closer colleagues. And presumably to his friends. None of us actually knew if he had any though. Jack was mainly just something the yes-men throughout the company called him when he wasn’t around, as in, ‘Jack is behind this project one hundred percent’, or ‘We’d need Jack’s approval before even considering that’. Or even, occasionally, ‘Jackass’.”   Because her skill as a writer caught Jack’s attention, Katie was moved from standard ecologist to senior data compilation expert and data liason to public relations.   In sum, Kate compiles information and readies for public consumption.   While Katie enjoys working for Jack, she really misses being out in the field.   When Jack tells her she needs to attend an important conference with him in Rio, Katie is reluctant to go and not because of the work but because she’s afraid that she won’t “survive an entire week in a romantic, tropical resort town with Jack Benedict without throwing myself at his feet, admitting to two years of secret adoration and begging him to let me be his sex slave.”

The story is told in the first person and it’s a very conversational tone.   I know that this can be offputting to some readers, but I’ve always liked the chatty girlfriend storytelling voice (I supported chick lit long after it died). Further, Jack is loquacious which gives us insight as to what is going on in his head even though it’s told in the first person.

In some ways this book reminded me of an HP.   It had the boss / secretary dynamic, the exotic setting (Rio) and even an obligatory shopping trip due to lost luggage (shopping trips are de rigeur for HPs).   The power dynamic between the two didn’t make me uncomfortable, probably because it is told in the first person. In other words, Katie was never uncomfortable in the wrong way and she never felt like her work position was threatened.   Further, it wasn’t they were in Rio and then they were in bed.   The transition from boss and assistant to lovers seemed much more natural.

In fact, it all feels natural and believable.   Katie discovering a lesbian couple who are into the lifestyle at the conference wasn’t odd at all, partly because it’s treated so casually.    The other couple helps to provide insight into Jack and Katie’s relationship too because they assume Katie and Jack are a couple.   For instance, Katie observes Jane wiggling in discomfort and recognizes the wiggle as a recently paddled behind and offers Jane some Tiger Balm to alleviate some of the soreness.

"We'll do a sneaky ointment handoff later. You can keep it. It's not like I'm going to need Tiger Balm this trip for anything but a pulled muscle if we go hiking again."

"You're not?" Jane said, her initial confusion replaced by a dawning awareness.

"Oh honey, that's just sad. But maybe y'all will make up. Rio's pretty romantic, after all." And breaking into a painful little jog, she left my side and rejoined Kendra, leaving me a bit puzzled and slightly concerned.

Just what impression had Jack and I been giving everyone?

I thought that the way in which Jack outs Katie as a submissive was well done.   Jack is observant and Katie responds to his natural command by accidentally slipping in a few “Sirs” now and then.

“I may really regret asking this. I didn't come here planning to ask this. But out of curiosity, little Katie, what would you do if I just said, "You will be wearing the suit, so get out in that hallway, now'?"

Did he mean aside from letting my jaw drop like an inebriated codfish and blinking at him like I was slightly deranged? Because I know that was my first reaction. My second-‘because I figured I had been thinking about how much I disliked my new job anyway, so I might as well just go out with a bang, not a whimper-‘was to stammer out, "I would-I would say "Yes Sir' and go out in the hallway, right now."

There is a lot more to the story than just sex and the relationship.   There is a lot of atmosphere.   We get a feel for local ecology Rio itself through Katie’s love for the outdoors, we are treated to descriptions of local cuisine and decadence of the beach and ocean.

The emotional conflict is, in part, the office dynamic (as in what happens when we both return to Houston) but also that Katie and Jack are learning about the strength of their feelings for each other through the seriousness of their play.   For once, this submissive thing isn’t just kind of a joke for Katie.   She’s a submissive and she enjoys being a submissive, but in the past, her interactions are a bit rote.   When Jack asks Katie a question, she gives what she thinks is a perfect response to which Jack replies “Did you learn that by heart from the Big Book of Submission?”   And Jack, who self describes as a spanker with pretensions, finds out that Katie not taking his orders seriously really bothers him and not because he is all jacked up on the need to control but because he wants Katie to take him seriously.

What holds this book back, in my opinion, is   lack of tightness in the descriptions and dialogue.   Both Katie and Jack tend toward verbal monologues instead of actual conversation.   The descriptions of the local scenery is well done but almost too exhaustive.   The more is more concept is carried into the sex scenes.     At one point, Katie is so sensitized she is at the point of pain, which I suppose can be the point.   But I did feel that the story would have been much smoother and stronger had some of the scenes been clipped of unnecessary description and chatter.   For those that want to read a hardcore BDSM story, this probably isn’t it.   Most of the sex scenes contain light bondage, spanking, and a lot of ordering about.   B-

Remember that EC book prices are jacked up at third party retailers like Amazon.