I’ll admit that the first time I saw your book series was when Twilight came out.   I was recently getting into YA at the time, but after having read Twilight, I felt like your series was just a pretender.   Vampire Academy.   You have to admit it’s a pretty ho-hum kind of name.   Obviously vampire.   And I was quite a little reading snob at the time so I didn’t think much of it.   But before long I had an urge to read it – an urge for the world behind the title.   A little less than two years later I finally got the chance to read it, and I am proud to say it kicks Twilight to the curb. 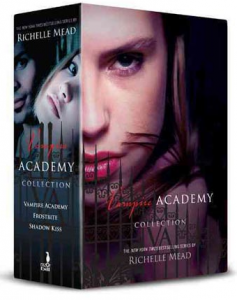 Rose, a dhampir, is on the run with Lissa Dragomir, a Moroi princess.   The dhampir and the Moroi are the two respectable vampire species.   They are forever at war with the Strigoi, a race of vampires that are made instead of born with vampirism.   Rose and Lissa have fled St. Vladimir’s Academy because of an incident almost two years before that changed their lives forever.   A new dhampir professor named Dimitri captures the girls and returns them to the academy after almost two years on their own.

Their return to St. Vladimir’s brings new challenges for the two girls.   Rose is separated into dhampir classes while Lissa into Moroi classes.   The dhampir are the ones that protect and care for the Moroi, who are basically vampire royalty.   Rose has to catch up on combat techniques she missed learning with the other dhampir, and is assigned to be tutored by the handsome Dimitri.   While Rose is off training, Lissa is dealing with the world of Moroi politics and mastering her elemental affinity.   The two best friends are usually separated from each other – or so everyone thinks.   What they don’t know is that Rose and Lissa share a psychic bond unlike any other.

Through this psychic bond comes other troubles.   It isn’t normal for Moroi and dhampir to share such a strong bond.   Lissa’s also been getting strange mood swings, and finding mauled animals inside her room and backpack.   Someone’s targeting her, and Rose is determined to find out who it is.   Add in her attraction to Dimitri, as well as Lissa’s growing affections for a guy who seems creepy and suspicious, and the stakes (pardon the pun) are high.   Vampire Academy shows Mead’s skill in writing urban fantasy, but with a snarky teen edge.

Let it be said that not every vampire book has a doormat for a heroine.   Rose is quite the opposite of Bella.   She swears and isn’t afraid to kick ass if it means getting her way.   The odd maturity she shows despite her temper makes her a compelling heroine to watch, and her symbiotic friendship with Lissa really makes her a three-dimensional character.   She’s loyal and tough but still soft and forgiving.   Her attraction and romance with Dimitri makes her even better.   The age difference isn’t major, and as a reader I never once found it to be a big factor based on their connection.   Rose herself is almost 18, so her attraction to Dimitri, who is 26, isn’t seen as overtly gross.

Lissa is a nice mesh with Rose.   She’s softer and more of a people-person, but her own need to help other people makes her life harder.   The extremes that readers will see later on in the book because of her nature take this theme to a whole new level.   Her romance for an outcast Moroi boy is just as interesting as Rose’s romance, but is a lot more accessible for readers.   She’s a character that you come to care about early on, especially concerning the scenes where Rose actually gets into Lissa’s mind.   Readers really get to know a nice, fleshed out best friend despite the narrative being first person.

Your writing style is accessible, and I was pleasantly surprised to find that you moved from writing adult stuff to writing teen stuff without style issues.   Teen writing has to have more of a frankness to it, and more natural humor, and Vampire Academy had more than enough of that.   The general world building was also well done; everything felt really fresh for a vampire novel, and the whole ‘Vampire Finishing School’ idea was done better here than in other series such as the House of Night.   The action was always present, and the readers never have a chance to be bored.   However, it is still the first in a series, so the ending is just enticing enough to keep you wanting more, and the depth of the plot and the intrigue can definitely be upped in later novels.

Vampire Academy is a solid addition to the teen paranormal market and a great first novel in a six-book series.   The well-written romance and action will keep readers of all ages coming back for more, and it easily sets itself apart from the cliched books like Twilight and The Vampire Diaries.   It’s enjoyable, quick, and a good bridge novel if you don’t read a lot of young-adult paranormal or urban fantasy.   With the sixth and final book coming out this year – just before the start of a new spin-off series – readers who wait for completed series will be able to start it without too much trouble.   B