Toward the end of the review it is going to sound like I didn’t like this book but that would be the wrong impression. I did like this book.  I liked it but in a lot of ways I found Mark, like his older brother Ash, to be almost saintly in his capacity for understanding and forgiveness which leaves me wondering if the only way mortal and flawed women can be loved is in the hands of the most perfect of men and how the Turner boys turned out this way when their father was a monster. 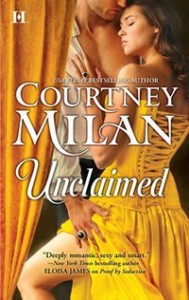 The hero is Mark, the youngest of the Turner brothers. You noted at the outset that you wanted to write a story about a rock story.  Mark is the embodiment of a Victorian rockstar by virtue of a book he wrote on male chastity.  He was even knighted for his efforts.  For some reason, his slim volume about how men should restrain their desires to avoid ruining women has caught fire amongst the males in society.  Companion pamphlets are being written. A club has been formed.  There are secret handshakes.  Codes of honor. Vows of celibacy.  None of which have anything to do with the original volume Mark wrote but because of his fame, Mark is being considered for a government position that no one cares to have except one George Weston.  Weston puts out the call for someone to seduce Mark, ruin his reputation, and put him out of the running for the government position.

Tired of the fame, Mark travels to Shepton Mallet, a village of his youth to find some peace.  Instead he finds Jessica Farleigh.

Jessica Farleigh, a courtesan, takes Weston up on the offer to ruin Mark.  (It’s such delicious irony that this book features a female out to use sex to ruin a man).  By seducing Mark, Jessica will free herself from the sex trade and be able to retire to the country.  Jessica has been ill used by men, the extent of her mistreatment not really unveiled until the end. She believes Mark will be easy to seduce and is flummoxed when he is not. Jessica’s deception is easy to swallow primarily because of two things: 1) she is desperate and 2) Mark does not care one whit if he is ruined. He wants to be ruined or seduced, but only by the right woman.   Jessica’s initial forays at seduction are met with Mark’s disappointment.  He initially believes that Jessica is the right woman for him but her practiced wiles are so easy for him to see through that he is entirely put out.

It was easy to set aside his arousal, after all. He was actually rather disappointed.

Mrs. Farleigh made herself sound quite stupid— as if she were the sort of forgetful female who reg- ularly traipsed about outdoors in the wet. Some men of Mark’s acquaintance might have believed the act. After all, they believed all women were stupid.

Not Mark. And most definitely not this woman. If he had to guess, he would have said that she chose every item of apparel with the same care a clockmaker employed when selecting springs.

While Mark is chaste, he is no innocent. Jessica, on the other hand, is more innocent in heart and spirit even if she is chaste because she’s not had the freedom to love or to hate. It’s all had to be suppressed for the furtherance of her own survival. There is a scene in the book in which Jessica admits to being a good shot because she had to learn to shoot badly with precision else the man she was with would sulk and be unbearable if she beat him. And the one time that Jessica took pleasure for herself, she was punished. No, banished. And left to fend for herself.

It’s easy to see how one whose whole life has been to walk carefully, step carefully because of men would have hatred toward them and to think less of them.  When Mark treats her with respect and demands respect in return, Jessica barely knows how to respond.  She is so used to shaping herself to meet the desires of someone else, she is finding it difficult to be herself.  Her seduction of Mark begins from a place of survival but dislike but as she spends more time with Mark she finds that he is seducing her in an entirely different fashion and she is beset by emotions of dislike for herself, frustration toward Mark, and wonderment of her growing desire. In some ways, Jessica is written as a character without sharp edges. Despite her time as a courtesan and her dislike of her trade, she isn’t hardened but rather sweet. While her viewpoint is cynical, she holds little animosity toward the townspeople who shun her. Both Jessica and Mark are portrayed as fairly understanding people, or at least perspicacious. They seem to intuit the foibles of others readily.

Since writing the book, Mark has lived in a state of frustration.  He believes that no one has actually read his book because it premised on the idea that men are in control of their own desires and no woman, no matter how beautiful, lively, or interesting, is leading a man to his downfall:

“There are no unchaste women, or profligate men.” He set his hands on the podium. “There are no saints. None of you men want to hear me say that. After all, if it’s not a woman who’s led you astray, you’ve gone down the wrong path all on your own. If I am just an ordinary man, it means that chastity is attainable for everyone. It means that you are all responsible for your own mistakes, that you must own up to the wrong you have done without laying the blame on anyone else’s doorstep. It means you can never hold a woman scapegoat for your shortcomings again, not even if she is pretty and lively and intelligent.”

No matter how many times he excoriates people, they simply hold him in higher regard and the book uses this for great comedic effect.

Jessica, on the other hand, is viewed as a wicked woman.  Her clothes are a little too loud. Her dresses not modest enough.  Her mannerisms too engrossing to be those of a true lady.  The men secretly fear the feelings she stirs in them and thus she is deemed immoral.  The women overtly fear the feelings she stirs in their men and thus she is a harlot.  The lessons of Sir Mark are for men and women alike: that they must be responsible for their own desires, lusts, and attractions.

This is a powerful message.  But in some ways, I wondered that Mark had to be the vehicle for this message.  In this period, perhaps, only a privileged male could have given voice to this scandalous proposition and be heard.  But Jessica (as Margaret in the previous book) appears to be redeemed through the belief by Mark that she is a person of worth.  She claims her redemption in the end through sacrifice.

Sir Mark is a little too perfect for me.  He waits to marry because he wants to find someone to whom he wants to be faithful, not just to whom he can be faithful.   He understands the plight of women, particularly that of Jessica nearly better than she understands it.   What has made the Turner men so understanding? So great a champion for the cause of women?  The Turners shared a terrible mother. He was on his own for sometime with only his brother Smite for support.  I appreciated it when Mark lost his temper, when he was hurt, but felt he appeared too good to be true. Of course, it could be said that Mark failed the basic precepts of his own book on male chastity – not to be chaste, of course, but to understand that women in his time were placed in untenuous positions and that they did not have the luxury of acting in a manner which Mark had wanted from Jessica.

I enjoyed every page in this book. I think that this book really celebrates womanhood. It’s a book that I wouldn’t hesitate to recommend but because of the brilliance of the writing, I wanted to see more.  I loved Mark and Jessica but I felt there simply wasn’t enough challenge in the story to Mark’s character or explanation for how that character was shaped.  B

→ Jane
Previous article: Review: I Love the Earl by Caroline Linden
Next Post: What Janine is Reading September 2011: The conceiving an heir trope