This anthology contains stories by Tessa Dare, Leigh LaValle, Courtney Milan, and Carey Baldwin. The four authors–who call themselves The Bodice Rippers–published this anthology to raise money for the fight against breast cancer.  When the women were interviewed by USA Today, Ms. Baldwin said:

We are a group of four friends who, inspired by the many examples of philanthropy in the romance community, decided to take action in the fight against breast cancer.

We are participating in the Sept. 22 Avon Walk, which has raised more than $423 million for research to find a cure or prevention, as well as for programs that enable all patients to access quality care. Support for the medically underserved is a key priority.

We’re proud to be part of the romance community and want our team name to reflect that. While the term “bodice rippers” has been used as a derogatory way to refer to romance novels, we want to emphasize that what lies beneath the bodice is an important concern for every woman.

As part of our fund raising efforts, we put together Three Weddings and a Murder. This book is more than a compilation of reunion stories. It’s a labor of love from four friends, and it’s not intended to be a single-genre anthology. What ties together three historical romances with a contemporary romantic thriller is our love and respect for each other and for our readers. Like the readers in our community, the stories are diverse. We will donate all profits to the Avon Walk.

So, it’s a book one can feel good about buying, especially given it costs just 2.99. The anthology isn’t spectacular–I loved one of the stories, liked two (one more than the other), and disliked the fourth–but it’s a pretty good read at a great price for an excellent cause.  I give the collection, overall, a B. 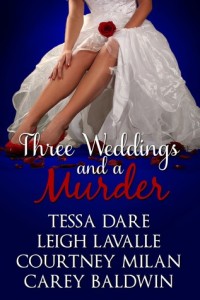 This was my favorite tale of the four. Eighteen year old Eliza Cade is the youngest of four sisters. Eliza’s parents see her as their most troublesome daughter–due to a reputation wrecking choice she made as a young girl–and have refused to allow her to come out into society until her older three sisters are wed. Eliza chafes mightily under the limits imposed upon her. One night, at a ball hosted by her parents to announce one of her sisters’ engagements, Eliza is hiding out in her family’s morning room, peeking at the dancers through the keyhole, and gossiping with her sister. When her sister leaves the room, Eliza is mortified to realize there’s a man in the room, a man who’s heard all the embarrassing things she’s just said. When she realizes the man is none other than the scandalous Harry Wright–the sort of scoundrel no young lady should ever be caught alone with–she’s both appalled and enthralled. The two share a tantalizing conversation and make quite an impression on the other.

Over the next four years, Eliza and Harry are thrown together in various situations. Harry’s actions on the surface appear to be those of a debauched, unprincipled womanizer, but the truth about the Scandalous, Dissolute, No-Good Mr. Wright is not as it appears.

This is wonderfully told story. Ms. Dare, in fewer than 150 pages, creates a compelling, interesting plot and two winning protagonists.  Eliza and Harry are just right for one another—their interactions sparkle and sizzle with wit and desire.  This story gets a solid A and ranks up there with the very best of Ms. Dare’s work.

“The Misbehaving Marquess” by Leigh LaValle.

This novella is also a treat. Its heroine, Catherine Raybourne, the Marchioness of Foster, was abandoned by her husband two weeks after their wedding. She was caught in a compromising position with another man and James, the Marquess, left her in anger. She’s heard not a word from him for the past five years and is beyond shocked to find him, one quiet Wednesday afternoon, taking tea in their library. When she asks why, after all this time, he’s returned home, he tells her, given the recent death of his cousin, he now needs an heir.

Thirty minutes later, Cat still could not catch her breath. Jamie had made the preposterous statement with utmost calm, his face quiet, his gaze steady on hers. As if he’d said “I need a new pair of boots.”

Her skin burned with the very word.

It was not the thought of children that unsettled her. Not even the knowledge of how children were created.

It was the memories. Vivid flashes of heat that thrummed under her skin. Jamie in her bed. The shock of his mouth everywhere. His skin impossibly smooth against hers. The places she craved him. Jamie filling her, again and again, the madness between them. Her unimaginable pleasure.

Five years of a cold bed and she had not forgotten a thing.

Cat and Jamie grew up together and were very much in love when they married. Cat’s behavior, though innocent, enraged Jamie; his abandonment angered her equally.  Cat has spent the past five years working on Jamie’s estate and being desperately lonely. Jamie has traveled the world, always thinking about the woman he left behind. When he returns, the passion the two have always had for one another is still potent yet neither finds it easy to move past their hurtful past.

Ms. LaValle is an excellent wordsmith–I loved the language in this story. She does a nice job of showing the reader how both Jamie and Cat feel–their conflict and its resolution is deftly portrayed. Ironically, what I liked least about the story was its length. It was longer than it needed to be and overly and unnecessarily dramatic in its last quarter. Nonetheless, it was an enjoyable read. I give it a B.

Frankly, I was surprised I didn’t enjoy this novella more. I loved two of Ms. Milan’s earlier novellas–“The Governess Affair” and “This Wicked Gift” but wasn’t as enchanted with this one.

The hero of this novella, Simon Davenant, returns to the village he grew up in to woo and wed his childhood sweetheart… in three days. The woman, Ginny Barrett Croswell, is newly widowed and the last time the two spoke, “seven years, two months, and… four days ago”, the two had a raging argument over Ginny’s decision to marry another man. At the end of that fight, as Ginny reminds Simon, he threatened her.

“You’ve allotted three days to accomplish all your threats?” Now she did smile. “My. You’ll be working quickly. When last we spoke, you said that if I married Mr. Croswell, I’d regret it.”

“I don’t believe I used quite those words. But yes, you’ve got the general gist of my sentiment.”

She put her head to one side, looking off into the distance. “You claimed that when he passed away, you’d seduce me, and once I’d fallen in love with you, you’d stomp on my bleeding heart and leave me weeping.” She recited those words as sweetly as if she were discussing a favorite recipe for plum preserves. “Oh, don’t give me that freezing look; I’m just trying to make sure our memories are in accord.”

There was only one thing for it. He was going to have to lie.

He reached across the table and took her hand. “You’ve got one thing wrong, Ginny. I didn’t just claim that I’d do those things. I promised I would.” He stroked his thumb across her palm. “And you know I always keep my promises.”

Simon, who has made a fortune on the railways, is about to lose all of his wealth to a competitor… in three days. He knows–for this is the reason she rejected his suit seven years ago–Ginny won’t wed him if he’s a poor man. Ginny grew up destitute and has, her entire adult life, refused to ever risk such privation again. Simon still determinedly seduces her, keeping his upcoming misfortune a secret, sure having her is worth any cost.

This story didn’t completely engage me. While I enjoyed interactions between Simon and Ginny–Ms. Milan’s romances are sensual and her characters well-spoken–I didn’t like either Simon’s deception or Ginny’s continued insistence on the importance of creature comforts. I also found the resolution of the story to be too tidy. I enjoyed the writing but not the plot. I give “The Lady Always Wins” a B-.

“Solomon’s Wisdom” by Carey Baldwin: Ms. Baldwin’s story is by far the weakest in the book. For starters, it’s awkwardly matched to the other three. And, it’s a wreck of a tale.

“Solomon’s Wisdom” is a contemporary romantic suspense tale set in Tangleheart, Texas.  Twelve years ago, Anna Kincaid confessed her love to then bad boy Charlie Drexler. He promptly left town. Charlie, now a pediatrician, has returned to Tanglewood to convince Anna to give him another chance. Charlie and Anna both are filled with lust for one another, but Anna is unsure if she can trust the guy who walked out on her without a word. I couldn’t make much sense of their story. I could feel the heat between them, but didn’t believe in their love. For starters, twelve years seems like an awfully long time for two gorgeous successful people to have been unable to move past their high school crushes. But the larger problem is that Ms. Baldwin spends far less time on the romance part of her story than she does on its suspense component.

And her suspense story is whacked. In just over 100 pages, Ms. Baldwin has shoot-outs, child-abuse, obscure medical conditions, villains stomping about in menacing hand-tooled alligator boots, and suspicious suicides.  The story is almost impossible to follow and difficult to care for. The bad guys are caricatures–I found myself giggling when I’m pretty sure I was supposed to be scared–and the good guys ridiculously lucky. The plot is implausible, psychologically manipulative (Baby in DANGER! Baby in DANGER!) and pretty much ticked me off. “Solomon’s Wisdom” gets a heartfelt D from me.