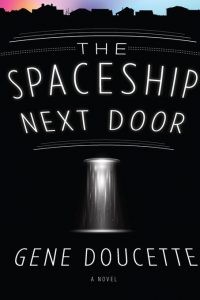 When a spaceship lands in Sorrow Falls, a lovable and fearless small-town girl is the planet’s only hope for survival

Three years ago, a spaceship landed in an open field in the quiet mill town of Sorrow Falls, Massachusetts. It never opened its doors, and for all that time, the townspeople have wondered why the ship landed there, and what—or who—could be inside.
Then one day a government operative—posing as a journalist—arrives in town, asking questions. He discovers sixteen-year-old Annie Collins, one of the ship’s closest neighbors and a local fixture known throughout the town, who has some of the answers.
As a matter of fact, Annie Collins might be the most important person on the planet. She just doesn’t know it.

I’d never heard of this book before it was mentioned by one of our readers. Yeah, a big shout out to Darlynne for this one. It’s weird and funny and a bit (okay maybe more than a bit) rambling before finally kicking into gear but ultimately I enjoyed it. Note that word – ultimately.

To be honest, if Darlynne hadn’t been turning verbal cartwheels about it I might have signed off at about the 1/3 mark. To steal a bit from the book, thoughts were being slowly spun, that got languidly twisted into threads that were eventually turned into an idea. Or to put things another way, the initial third of the book was like relaxing in a rubber raft, slowly floating down an unknown river, occasionally drinking a glass of whatever you want to be drinking, watching the unchanging scenery passing by but not really appearing to be getting anywhere exactly. It’s pleasant, yes, but after a while one begins to wonder, what’s the point? I once took a rafting trip down the Chattahoochee River and it was like the opening part of the book – I’d swear I could walk faster than that river flowed.

Then things started to pick up a little, the river banks narrowed, the speed of the river quickened a bit, and it began to feel more exciting. I still had no idea where the heck I was going but as the rapids began appearing it felt as if I were getting there more quickly. Then the falls announced themselves in the distance accompanied by the increasing roar of churning water tumbling over a precipice. At that point I mentally hung on to my raft and was glad I’d stuck with the book.

The sardonic humor delighted me. Annie Collins is not quite the girl next door. She’s intelligent, down to earth, used to watching out and doing for herself with parents who are removed from the narrative as happens in YA focused books. But there are lots of adults who aren’t idiots, or uninvolved, or brain dead – though that last description might be called into question depending on how one views how some of the adults are changed for a bit. There are sly pokes at conspiracy kooks, the government, the military, rural healthcare, rural malls, small towns, and frankly more map directions and driving instructions than one book needs. There’s also sections that reminded me a little bit of “Shaun of the Dead” only not quite.

The aliens are inventive as is the reason for the arrival of the ship. I did humph at why alien life would want to spend so much time on Earth because by the standards of the information that is imparted, we really aren’t All That. The story also contains the stereotype of the Earthling who manages to manipulate the situation so that the planet isn’t destroyed by superior beings who could easily do just that (since there’s a sequel it’s not too much of a spoiler).

But the book also has Oona and Laura who dress like futuristic dystopian warlords (most of the time though once Oona does get caught out in her kitten print flannel pajamas) and have a cool tricked out camper van. Plus there’s Ed (which is short for Edgar so Annie can understand why he rolls with “Ed”) who takes Annie seriously and can think quickly as everything hurtles towards the apocalypse. Some degree of hand waving takes place to do away with or clean up a few pesky details but by then the plot was careening to the end which does not, thank goodness, involve nuclear explosions or other flashy kabooms.

My grade for this is an average of the first 1/3 with the last 2/3.I will be checking out the next book in the series and keeping my fingers crossed that I like it as well. What will Annie and Ed be getting involved in next? B

→ Jayne
Previous article: REVIEW: Catfishing on CatNet: A Novel (A CatNet Novel Book 1) by Naomi Kritzer
Next Post: REVIEW: Judge Dee and the Limits of the Law: A Tor.com Original by Lavie Tidhar