REVIEW: The Sky Above Us by Sarah Sundin 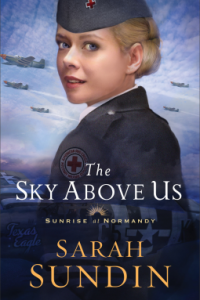 Numbed by grief and harboring shameful secrets, Lt. Adler Paxton ships to England with the US 357th Fighter Group in 1943. Determined to become an ace pilot, Adler battles the German Luftwaffe in treacherous dogfights in the skies over France as the Allies struggle for control of the air before the D-day invasion.

Violet Lindstrom wanted to be a missionary, but for now she serves in the American Red Cross, where she arranges entertainment for the men of the 357th in the Aeroclub on base and sets up programs for local children. Drawn to the mysterious Adler, she enlists his help with her work and urges him to reconnect with his family after a long estrangement.

Despite himself, Adler finds his defenses crumbling when it comes to Violet. But D-day draws near. And secrets can’t stay buried forever.

Book two in the “Sunrise at Normandy” series follows “The Sea Before Us.” Though the events of both books refer back to what began that first book, this one gives enough background information that I think it can stand alone. Here we’ve got a Red Cross volunteer looking for experience to further her dream of missionary work.and an American pilot wracked with guilt over his actions years ago that lead to a schism from his brothers and family.

Lt. Adler Paxton is headed to England on a troop transport ship when he meets Violet Lindstrom. He actually rescues her from one of his fellow pilots who doesn’t believe “no” means “no” and then later they talk a bit on the voyage over. To Adler’s horror, he realizes that his younger brother is also on board and given what tore their family apart, Adler tries and manages to avoid Clay. Violet is grateful for Adler stepping up as a gentleman to help her and happy to have met a man as tall as she is. At six feet, Violet is used to looking down on most men. But her dream won’t allow a future with a brash pilot – as her missionary aunt calls them – so Violet’s not looking for more.

Frustration awaits both of them as his squadron’s planes haven’t arrived yet and Violet discovers that her hopes of working with English children displaced by the war isn’t going to happen. While Adler is fuming over not yet being able to fly and do his part for the war effort, Violet and her friend Kitty struggle to get an Aeroclub set up on one of the bases. Fate, as Fate does, eventually lands them both back together.

After finally learning part of what haunts Adler from his past, can Violet help him to rediscover his faith and believe in forgiveness? And when the full truth of what he did becomes known to her, can she truly overcome her own failure to stand by Adler and help him?

I thought the “The Sea Before Us” was a faith heavy book but this one exceeds it. Both Violet and Adler struggled with their faith and forgiveness – mainly whether or not they were worthy of it. Adler’s “Come to Jesus” scene was especially intense. I liked the character of Nick, Adler’s captain and a man of faith himself, who served as a sounding board for Adler and gave both Adler and Violet some thoughts and Bible verses to think about. The obstacles to their romance weren’t just “five minute conversational” ones so the time taken for them to overcome their reluctance to believe that these could be dealt with and overcome are believable given this was 1944 and social views on the issues were much more conservative.

The scenes of Adler’s fighter squadron in the air were intense and, I thought, well done. They also served as a stark reminder of how much those men aided Operation Overlord, the dangers those fighter pilots faced as well as the airmen who flew on the heavy bombers. Meanwhile Violet and Kitty worked hard to get the Red Cross program off the ground (sorry, couldn’t resist the pun). In doing so, Violet had to face her prejudice against working with adult men who she thought were less worthy of her efforts than the children she’d dreamed of helping. I’m not sure if the mystery she had to solve really happened but given the strict rationing of the time, I could believe it.

One thing I was hoping for in the first book was delivered and that’s interactions between the estranged brothers. Plus there’s a bit of a glimpse of Wyatt and Dorothy from “Sea” as well. Now, I’m eagerly looking forward to Clay’s story as a Ranger in the last of the trilogy. B