Recently I read a post on AOL about how The Abbey, twice voted the World’s Best Gay Bar, has decided not to host bachelorette parties anymore until marriage is legal for everyone. Gay owner David Cooley is quoted as saying he feels it’s a slap in the face to his regular patrons who, as of now in most states, can’t enjoy the same right to get married. So when I was perusing the offerings of Bold Strokes Publishing at netgalley and saw your title, it felt like fate for me to give it a try. 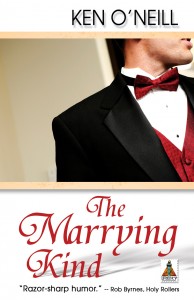 In 2007, Steven Worth and Adam More have been a couple for almost six years. They have an apartment, two furry children, friends and jobs in NYC. Steven reports, when he feels like it, for The Gay nyt – a freebie boutique newspaper – while Adam runs himself ragged as one of the premier wedding planners in the city. But lately, Adam has been acting a touch depressed and having nightmares. It takes the men a while to put things together but when they receive an invitation to the wedding of one of Adam’s cousins and the envelop is addressed to “Adam More and Guest,” it’s the last straw and allows them to crystallize their feelings about what’s wrong.

See, Adam’s sister Amanda and Steven’s brother Peter have also been together as a couple for years and were also invited to the same wedding yet the invitation was addressed to them both. What, Steven wonders, makes his relationship with Adam any different? Why is he relegated to being “and Guest” when his brother is addressed as Peter Worth? Why did he and Adam just go to a commitment ceremony for a gay couple they know instead of it being a wedding ceremony? Why should they keep buying presents and going to weddings of hetero couples when they’re denied the same thing? And suddenly they decide – no more.

Steven’s article about their decision to boycott weddings takes the city’s gay community by storm. All over, florists, caterers, waiters, and name-that-needed-person-for-a-wedding-celebration decide to go on strike. The feeling of activism and empowerment is intoxicating for them. That is until Peter and Amanda announce their own wedding and suddenly what was abstract has become very concrete. Is family love and unity more important than their ideals. And will Steven and Adam’s relationship be able to stand up to the strain?

You tell the story from Steven’s first person POV and he’s a fun, witty story host. He’s also an honest one who readily admits his flaws and shortcomings. That can make a big difference for me with this style of narrative. I liked reading about him and about how much he loves Adam who loves Steven in return. The little details here showcase the fact that these two have been together a long time. They’re at ease together and in their relationship. They joke, they laugh, they take care of each other and some of Steven’s little mannerisms have even oozed over on Episcopalian WASP Adam such as the heart clutching in moments of high emotion. But as sturdy as their relationship is, it’s not a perfect Gay world they live in which adds one more realistic brick to the foundation of the story.

The conflict is built slowly. A little thing here, a tiny occurrence there. No one yells or screams “queer” at them. No one assaults them or spits at them. Still the shallow cuts and unthinking mental blows add up. The commitment ceremony is attended by foreign friends from countries which do allow same sex marriage and some of them comment on the lack in the U.S. Steven watches Adam’s mother fawn over Peter in a way she’s never demonstrated to Steven. And later when Adam ends up in the Emergency Room, Steven is faced with the fact that no one would ever question the right of Amanda and Peter to be together while facing what comes whereas he has to try and force his way past a security guard to be with the man he loves and has built a life with for six years.

Nobody in the book is perfect, no one sails through without making any mistakes and a lot of the characters second guess themselves as events progress. The conflicts are also palpable and nothing that a quick, 5 minute discussion will fix. As Steven and Adam discover, their decision and that of others who are inspired by the stand those two men have taken, will impact a lot of people. In some cases jobs are lost, Adam’s business – which has been the main source of income for them – suffers, hetero couples have to scramble to reorganize their big days, and of course several of the Worth and More clans are furious when Steven and Adam announce that not only will they not help organize Peter and Amanda’s wedding, they won’t even attend it.

Things take an even more serious turn when Steven begins to have doubts about his personal choice to boycott his brother’s wedding. They’re from a close knit Romanian family that has already weathered the split of their parents and there are other unrepaired family relationship cracks that have Steven petrified that if he lets this go too far, he’ll lose his only brother and antagonize his mother for good. But on the other hand, Adam is 100% determined to stand by his decision come what may – even if what comes is a rift between himself and Steven.

The decision Steven and Adam reach in the end does end up costing them emotionally yet the price is one both they and their families feel is acceptable in order to make their point. Perhaps the capitulation of the ones who had pressured them to change their minds is a bit of wishful plotting. Adam’s “on his knee” proposal is slightly Hollywood but then given Steven and Adam’s addiction to melodramatic movies, it’s perfectly in keeping with how you’ve written their characters. Okay the inclusion of the rainbow in the end is a touch happy happy but I had to smile at older the couple who congratulate Steven and Adam as they enter what for them would have turned out to be a long engagement before they finally got the right to officially and legally say “I do.” Let’s hope they got lots of Baccarat and Lalique as wedding gifts. B

→ Jayne
Previous article: REVIEW: Red by Kait Nolan
Next Post: The Case of The Oatmeal v. FunnyJunk and Charles Carreon