REVIEW: The Grove of the Caesars by Lindsey Davis 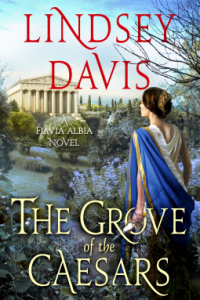 In the sacred grove of Julius Caesar, something deadly stirs in the undergrowth—a serial killer, who haunted the gardens for years, has claimed another victim—

At the feet of her adoptive father, renowned private informer Marcus Didius Falco, Flavia Albia learned a number of important rules. First and foremost—always keep one’s distance from the palace, nothing good comes from that direction. But right behind it—murder is the business of the Vigiles, best to leave them to it.

Having broken the first rule more often than she’d like, it’s no surprise to anyone when she finds herself breaking the second one. The public gardens named after the Caesars is a place nice girls are warned away from and when a series of bodies are uncovered, it seems that a serial killer has been haunting the grove for years. The case is assigned to one Julius Karus, a cohort of the Vigiles, but Albia is convinced that nothing will come of his efforts. Out of sympathy for the dead women and their grieving relatives, Albia decides to work with the vile Karus and bring the serial killer to justice.

CW – The crimes being investigated are done by a serial rapist/murderer. No actual crime is depicted on page.

Albia’s husband Tiberius Manlius Faustus will finish his year long term as an aedile soon and to keep himself busy, he’s bought a construction company. Family business has taken him out of Rome but he’s left Albia in charge of a laundry list of things that need doing. One of these is work being done deconstructing a man made grotto in the gardens left to Rome by Julius Caesar. It’s out on the fringes of the city in a less than salubrious section of town but still pretty and will be used for the blowout birthday party of a wealthy man.

The next morning Albia discovers that during the party, his wife disappeared. Her nude and violated body is discovered and Albia finally learns why her husband and his workers have been discreetly steering her away from coming to the work site. The bodies of women have been turning up around the grove for years and though reports have been lodged with the vigiles, nothing has been done. The age old “they’re just prostitutes or poor women no one cares about” excuse strikes again.

This time, the bereaved husband goes straight to the top (the Praetor) and demands results. In addition he hires Albia. With a fire lit under them, the Seventh Cohort finally gets to business but are now saddled with the Emperor’s private Bad Boy Investigator who cares more about charging someone than in finding and stopping the actual killer. Can Albia and the investigator from the Seventh nab the bastard before he kills again?

I was sorry to realize that Tiberius was going to be out of this story for the most part. Though what keeps him away and how this story ends might be important going forward. Anyway, the strength of this tale is in the police procedural aspect as well as “seeing and experiencing” historical Rome. The victims of the killer tugged at my heart as these women are still the ones who society shrugs off as unimportant – at least until multiple bodies are unearthed/discovered and suddenly people act as if they care. Flavia Albia cares and is determined to stop the killer from the minute she knows about the crimes.

There is also another plot thread woven through the story that I kept waiting to see if it would be tied in with the serial killer. It was less interesting to me and slows the book a bit though it does allow Falco and the Didii auction house to enter the story. I was amused to see that rare and (the ancient Roman equivalent of) out of print books were as avidly collected as I once went after print copies of books in the pre-digital age. Wow, that wasn’t that long ago.

Two new characters who are products of the novella Invitation to Die: A Novella of Ancient Rome

enter the (three ring circus) household of Albia and Tiberius. That doesn’t need to be read before this book but it does help explain why these boys act the way they do. Newbies to the world of Flavia Albia could start with The Grove of the Caesars but there are a lot of characters in the series already as well as tons of spoilers for past books.

I liked this book much more than the past few mainly because I sank into watching Albia and Ursus work together to outdo Julius Karus. I was also ready to (lightly) skim some paragraphs that serve as a roadmap to ancient Roman streets but don’t truly do more than allow us to watch Albia trudge around Rome. I hope that Tiberius takes a greater part in the next story as well as I enjoyed the interaction between them. But be that as it may be, I’ll be there for Flavia Albia’s next case. B