It’s difficult to give a grade to each one of your books because your prose is so fine that my complaints, if I have any, always sound so mean (as in small not cruel).

There are some brilliant things in this book, so brilliant that I needed more time spent with each character and the lack of time I got to spend with each character made me feel as if I hadn’t been given the entire story. Whereas Unlocked felt fully contained, this book (maybe because of the elongated epilogue) felt more like the set up story for the Brothers Sinister (the series that it does set up). Perhaps it was the subject matter, as well, that didn’t fit well in such a small space. 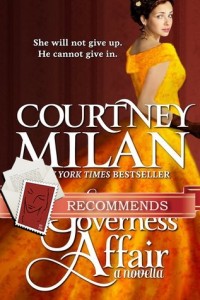 Hugo Marshall had plans to be one of the richest men in all of England. To achieve this, the former prizefighter won a position as the secretary / factotum of the Duke of Clermont, a selfish clod of a man. Hugo is known as the Wolf of Clermont, a man who makes problems go away by fair means or foul. If Hugo can manage to get the Duke of Clermont in the black and reconciled with his newly married heiress (a marriage that Hugo had orchestrated), Hugo will walk away with 500 pounds and the seed money for his empire.

This is all imperiled by one Serena Barton. She is threatening to make a lot of noise which will impede the Duke’s reconciliation with his wife, put a wrench in Hugo’s plans to achieve his commission from the Duke. Serena is described by the Duke as disgruntled servant who lured him into bed. Hugo, knowing the Duke, dreads knowing the true details.

Serena was taken advantage of by the Duke but she is confused by her own circumstances. She did not fight the Duke. She did not call out for help. Thus, while she wanted no part of him; while he threatened to harm her if she fussed; she does not understand that she was forced to copulate with him. But she was and now she is pregnant. She does not want to be bought off. She wants that voiceless part of her to be heard.

After numerous encounters with the Wolf of Claremont, a man she initially viewed as unprepossessing and harmless, Serena intuits that her biggest victory would be to steal Hugo away from the Duke, thereby ensuring the Duke’s downfall. Serena’s problem is how she, a woman who was raped and shies away from any physical contact from a man, can seduce anyone.

The setup is clever. The seduction scene in which Serena finally gains power and agency in the bedroom is fabulous (and clever). I loved how smart both Serena and Hugo were. Both were quick of mind, employing different stratagems although Serena’s was more brute force and Hugo’s was more quick thinking, which was a role reversal in and of itself. (This is not to say Serena wasn’t smart. She was as recognizing Hugo’s value to Clarement evidenced).

What struck me the most, however, was how unready I was for the big emotional shifts. I wasn’t ready for Serena to have sex with Hugo. She went from flinching on the bench next to him to seducing him in what seemed like a short period of time. I wasn’t ready for Hugo’s big moment either. What motivated him to become the richest coal miner’s son in England is really moving and I wished I had seen more emotional movement from point A (I’m going to make someone’s sacrifice worthwhile) to point B (I love you Serena more than anything).

It might be a testament to your writing that you’ve left me wanting more or maybe it was just too big of a story to fit into the novella format. Regardless, this book is still a recommended read. At $.99 you aren’t going to find a better story except for Unlocked.

Note: Janet aka Robin served as a freelance editor for this work. Robin has recently acquired a couple of other authors as clients. In order to be as transparent as possible, Robin’s client list will be maintained here and mentioned at the end of every review of one of her client’s works.