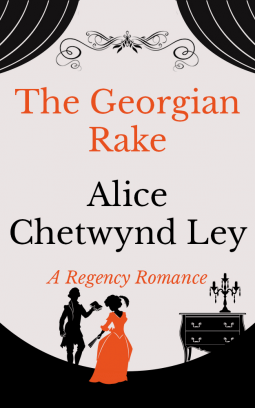 Two sister’s embark on journey, along a path they had not imagined.

The younger of the sisters, Amanda is rebellious and tempestuous in nature with a daring charm, she will stop at nothing once her interests are sparked; both to her success and detriment. Whilst Isabella forgets what it is to be young; only blinded by decorum, duty and outright stubbornness.

When Amanda learns that her sister is to marry Charles Barsett, she is horrified — having had first-hand evidence that he was a rake, with a reputation that was positively dangerous. Such a marriage is unthinkable; though Isabella has had her head completely turned by Charles’s title and wealth, regardless of her true feelings.

Amanda is one of those saucy, outspoken heroines who can’t be reigned in. She frequently sounds off before she thinks and won’t let anyone dissuade her once she’s made up her mind. She’s minxish enough that she can generally get her elders to roll their eyes while shaking their heads as they let her get away with doing most everything she wants to do.

Meanwhile, Charles is an enigma. Flashes of his true feelings about people zip across his face every now and then but he then quickly hides them with his usual haughty sneer and feigned indifference. Will a lifetime of hearing his father wistfully remember Charles’ mother as the best thing in papa’s life affect Charles’ thoughts on a future wife?

And what about Bella and her true love John? Is she going to go against her heart to please her mother’s ambitions and marry the son of her father’s lifelong friend? Meanwhile John gets persuaded by hoydenish Mandy to help her in her schemes to reveal Charles’ rakish behavior to her sister before it’s too late.

Add Charles’ cousin and one time best friend – before the unspoken of event which ruined their relationship – to the mix and everyone is at cross purposes. Can Mandy count on Roger to help her discover the truth behind this secret society of which Charles is a member or does Roger have other plans of his own to bring to fruition?

I should have disliked this book as Mandy is the type of hard headed heroine who is both determined and will stop at nothing to prove her point. What redeems her in my eyes is that she’s doing this for love of her sister and their mutual childhood friend John whom Mandy knows is the one her sister truly wants to marry. Mandy also doesn’t get away with much as Charles keeps catching her in the act of spying on him and seems more amused than anything else. Their growing mutual delight in these sparing matches does much to show from early on how things will end up.

One thing I do like about Ley’s books is that she tosses in little hints and glimpses of what is really going on in her characters’ heads rather than let every thing wait until the end when it blows in out of the blue. The villains get their just deserts while the main characters find their true love. If her heroes are a touch too besotted by the heroine from early on when said heroine is still acting a bit silly, well it’s a nice change from the asshat heroes so frequently found in romances. Plus this one is a Georgian era which is one of my favorites. B