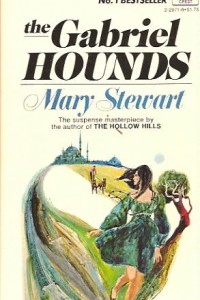 It’s all a grand adventure when Christy Mansel unexpectedly runs into her cousin Charles in Damascus. And being young, rich, impetuous, and used to doing whatever they please, they decide to barge in uninvited on their eccentric Great-Aunt Harriet—despite a long-standing family rule strictly forbidding unannounced visits. A strange new world awaits Charles and Christy beyond the gates of Dar Ibrahim—”Lady Harriet’s” ancient, crumbling palace in High Lebanon—where a physician is always in residence and a handful of Arab servants attends to the odd old woman’s every need.

But there is a very good—very sinister—reason why guests are not welcome at Dar Ibrahim. And the young cousins are about to discover that, as difficult as it is to break into the dark, imposing edifice, it may prove even harder still to escape . . .

I’ve been trying to think back over my Mary Stewart reading history and remember which was the book of hers I started with. There was a wire paperback book rack in my high school library with almost all of her (then) books on it and I think it was this groovy cover that caught my eye. I mean really, that dress. But it does show that this is a 1967 book which turns out to be important to the story.

It might be nostalgia coloring my view but this is another darn good effort from Stewart which plunks the reader down in the (then) exotic locals of Syria and Lebanon back in the days before the Lebanese Civil War turned Beirut from the “Paris of the Middle East” into a battleground. The detailed descriptions of the settings are enough to put you right there though this time around I felt that perhaps Stewart did go on a bit in cataloging the flora and geological scenery. How many ways do you need to describe scrub bushes, barren rocks and the heat?

Having said that, other descriptions in the book are magical. The run-in Christy and Charles have on a narrow souk street involving a taxi, a donkey, several small children and some bolts of garish silk tells you exactly where in the world the book opens. I loved Christy’s view of Charles’s Porsche pride and joy “blah blah, McPherson Struts, blah blah, dampers. blah blah blah.” The truly over-the-top Seraglio gardens would probably have dazzled even Cecil B DeMille and the scenery directors at Warner Bros.

I don’t want to give away the ultimate reason for the elaborate plot conflict but suffice it to say that the location, age old practices and the mores of the 1960s ought to give you a pretty good idea. As is usual with Stewart books, clues are laid out along the way but the whole is needed before they all slot into place and form the complete picture.

Christy is a bit more cosmopolitan than past Stewart heroines but still retains some veddy, veddy British characteristics such as her “but I shouldn’t be stopped at the border” superior attitude when the Syrian guards won’t let her back into the country from Lebanon despite lots of (slightly self important) arguing. She does have moments of the usual Stewart heroine naiveté at times yet is also more “pushy” due to being raised with all that lovely family lucre. But without this moneyed attitude, she would never have set the plot ball rolling nor would Charles have insisted on his due visit with Auntie. 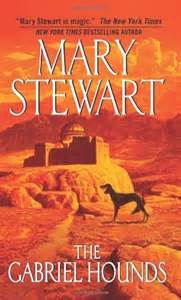 How this book is different, I think, is that Charles and Christy perceive they’re up against obstacles early on and plunge on anyway in the face of them just because they can and they aren’t used to being told no. Christy even gets a touch sulky at times and (almost) earns the sobriquet one villain gives her of “silly bitch.”

Charles and Christy soldier on in the face of all opposition because at heart they’re concerned for their aunt and determined to do the right thing. Christy does make mistakes but to me they’re forgivable due to the way Stewart arranges what Christy is allowed to see and gives her plausible interpretations of those things.

Since the book is told in first person, we know all about Christy and since she’s a bit obsessed with cousin Charles, we learn a lot about him too. However I think the character I enjoyed the most is their Great Aunt Harriet. The Mansel family is eccentric as a whole but Great Aunt H has set the bar to stratospheric levels. For years she’s roundly told off the family in her annual Will letters in addition to complaining about the flimsiness of the paper used in the overseas editions of The Times. And let’s face it, you’ve got to have some chutzpah to model yourself on Lady Hester Stanhope and get away with it.

As I mentioned earlier, once the plot is all laid out and tied together, it makes perfect sense. The book ends in a blaze of glory with each person getting his or her due and in a way that will burnish the legend of Great Aunt H for years to come. One of the most comedic noir scenes, and the one that has stuck with me for years, occurs near the end as Christy and Charles “mind the pigeons” in the Seraglio – though not, perhaps the mice and rats, and then get mistaken by some (snooty) British tourists for locals. The feather in the cap of the book, however, is Great Aunt H’s final present to Charles and Christy. Yeah, it’s not quite as good as some other books in the Stewart oeuvre but I still enjoyed it again. B