REVIEW: The Flame and the Shadow by Denise Rossetti 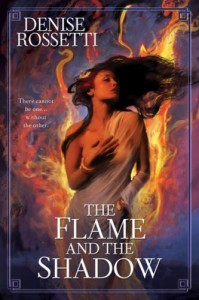 I picked up this book on the strength of a cover quote from Shana Abe and the vague idea that said quote meant that The Flame and the Shadow would bear some resemblance to Abe’s Drakon series, which I’m quite fond of. About one-third of the way through, I was ruing my decision – remembering that cover quotes from authors one enjoys are no guarantee that one will actually like the recommended book. It wasn’t that I actually didn’t like the book so far, mind you – I was just having some definite issues with it at that point in the story, and felt that perhaps it wasn’t for me.

First, the story: Cenda lives in an enclave of sorcerers and sorceresses (called Pures or Purists in this story) on a rather grubby little planet called Sybaris. Cenda is 41 years old, tall, thin and awkward, and consumed with grief over the recent death of her young daughter, Elke. Elke’s death has left Cenda with a sort of gift: she is now a Fire Witch, the only known one in the worlds these characters inhabit. The ability first manifests itself in an ability to withstand fire; small salamanders made of fire scuttle across her body and nestle themselves in her hair (the salamanders were a charming, eccentric feature throughout the story). As the plot progresses, Cenda’s powers grow and she learns to harness her abilities, which include being able to turn into a living flame and shoot fireballs at potential enemies.

Grayson of Concordia, also known as the Duke of Ombra (for reasons that were never quite clear to me; he’s not really a duke), is a harpist with the Unearthly Opera Company, a group of traveling players that roam from planet to planet performing at various venues. Grayson has a rather unique problem, one that drives him to agree to kidnap the Fire Witch: his shadow. Gray’s shadow is a sort of silent, faceless separate entity, corporeal and capable of movement independent of Gray’s – but not so independent that Gray can get rid of the shadow, whom he calls Shad. Shad has been with Gray forever, but was rather like a secret semi-invisible friend when they were children – Gray loved Shad and they were inseparable (literally). It is only when the intensely religious people of Gray’s home planet (they pray to a god they call "Judger God"; much less accessible and cheery than "Kitten God" or "Best Friend God", I would imagine) discovered Shad and label him an "abomination" that the young Gray renounced his friend, only to discover that Shad won’t – can’t – leave him. Gray flees home at 14, basically running for his life, and immediately falls into the hands of an abuser.

So, we have two very, very damaged people coming together, one of whom is going to betray the other. I am usually totally up for angst, but I was actually a bit depressed by all that Gray and Cenda had suffered. On the one hand, that indicates that the story came alive for me – the characters and their pain felt real. On the other hand, it made this a somewhat downbeat read at times.

As the story progressed, there developed aspects that I really liked and ones that I really disliked. I am not a science fiction fan. All of the "world-building" details – the plants and such with odd names – I tend to find those off-putting and even a bit self-conscious when I’m reading. The chief villain is the Technomage Primus of Sybaris; she wants Cenda for her powers, even though her devotion is to science and she disdains magic (she uses "science" as an epithet the way some people say "God", as in "science help us!", a detail I found annoying and unrealistic). The whole "science=bad" aspect seemed kind of heavy-handed to me.

What I came to like, more and more as the story progressed, was the genuine and complex emotions between Gray, Shad and Cenda. This will not be a "romance" for everyone – Shad’s presence, in addition to being just plain weird, adds both a definite ménage a trois aspect and a more subtle homoerotic aspect (which in itself had a slightly incestuous vibe, to make the whole thing even weirder) to the story. But ultimately, I found the relationship between Gray and Shad, and the one between Cenda and Shad, really quite poignant. The relationship between Gray and Cenda is perhaps inevitably more conventional; I wasn’t crazy about the man-slut/innocent heroine pairing (though Cenda had borne a child, it did not seem like she’d gotten around at all prior to her experience with Elke’s father, and she had tiresomely stereotypical issues with own femininity and attractiveness). Gray’s family background was rendered in a way that made him a sympathetic character even when he was behaving villainously. Curiously, Cenda’s history was a lot sketchier – it appeared that she had been raised in the magicians’ enclave, but if there was any mention of her parents, I missed it. About all we know about her past besides her one brief and unsatisfying romance and the birth and death of her daughter is that she was a bit of a bust as a witch before she gained her fire witch powers. I wouldn’t have minded Cenda’s character being filled out with a few more dimensions.

This book appears to be the first in a series, and despite my lack of enthusiasm for the sci-fi elements, I think I will pick up the next book in the series. I would imagine those readers who do like sci-fi, like emotional stories, and don’t mind unconventional elements in their romances might like this book even better than I did. I will give it a B.