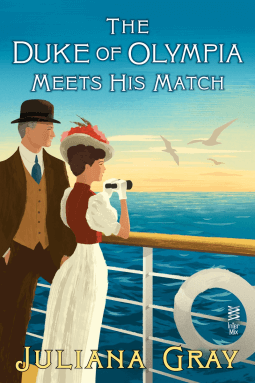 Aboard the luxuriously appointed SS Majestic, the duke is on a mission to retrieve a most important portfolio of papers and thwart a known anarchist. As the ship steams across the Atlantic, the duke’s search for the notorious master of disguise forces him into close quarters with an American heiress and her widowed governess, Mrs. Penelope Schuyler.

While Olympia has known his fair share of intriguing women, Mrs. Schuyler seems to have a way of challenging his expectations at every turn. But as their clandestine meetings lead them down an unexpected path, the duke must determine if Penelope is a woman to be trusted…

It was the cover of this novella that caught my eye. No heaving bosoms, no bare chests, no dress about to fall off the heroine and – could it be? – what appears to be an older hero and heroine? Also I love shipboard romances and am up for a turn of the 20th century story so I clicked request. Then I had a blast reading it.

Well howdy, not only are the characters older but the silver haired Duke is in his 70s (making him a fossil to the young American heiress whose mother is pushing her at him) and her companion who catches his interest is in her 50s. Thank you Juliana Gray. While Mrs. Penelope Schuyler intrigues Olympia, she effortlessly pricks his pride and shows no interest. No, instead she seems amused by him and uninterested in the secret spy stuff which he has no hesitation in revealing to this woman he just met. Hmmmm.

He on the other hand, has trouble maintaining his observation and elimination of possible first class suspects. Can it be ennui finally settling in or is that he finds he would much prefer to spend time in conversation with this intelligent, impecunious, middle aged widow? On occasion, he can even be roused to protective chivalry when he imagines her to be in need of his defense. Something he hasn’t felt in years and something she tries not to allow a small thrill from.

Soon they are engaged in a cat and mouse game not entirely about any secret papers. For Olympia discovers – almost equally amazed and appalled – that his interest in this quiet and ignored woman has gone far beyond that of an agent getting a mission done. To his astonishment, he feels far more for her than he’s ever felt for a woman before. Now if he can only get her to believe it. And save the day.

Fabulous, understated humor, clear and clever depiction of characters, a tight plot – I was bubbling with glee reading it. It’s not only light and funny though but is also tinged with deep sympathy for Penelope’s desperate, quiet dignity in the face of those who due to money need not bother with her feelings or those who have had what she longed for and never got. Her position in life might financially and socially be far below Olympia’s but her wit and presence quickly, as he admits, leveled the power balance between them. Their back and forth conversations are delightful as is the Duke’s increasingly desperate attempts to control the situation – both his hoped for romance and catching the anarchist.

The outcome of that really isn’t the focus of the book, and the resolution is a little hazy, but in the end all is well with the world and the day is saved. The marriage proposal, so in keeping with the Duke’s restrained personality, is the cherry on the cake of this funny and witty confection. A-

“Yes. To put the matter succinctly. You see, until now, whenever I contemplated this change, I couldn’t quite conceive what I might do to replace this business, which has occupied the heart of my life since I was a young man. I no longer relished these escapades as I once did, but what else was there to relish? What else might fill its absence?”

The blood pounded in her cheeks. “Are you saying you wish to marry me because you relish me?”

He sighed and gazed at the ceiling. “You want more flowery words, I suppose. Women always do. It is not enough that a man feels as he does, with all the strength of his heart; he must then declare it in the most honey-soaked language, flowing on and on, rotting his very teeth as it wanders through his mouth—”

“No.” She scraped back her chair and flung herself into his arms. “Relish will do very well.”