REVIEW: The Devil You Know by Jo Goodman 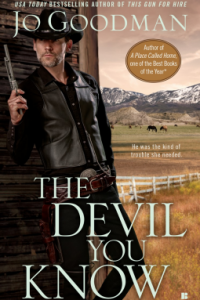 After a horse drags him through the countryside, Israel McKenna awakes bruised and battered in a field in Pancake Valley, Colorado. He can recall where he came from and where he was going, but the memory of how he came to be on the Pancake homestead eludes him. He’s certain he did something wrong to deserve such a harsh punishment—and so is the beautiful woman who reluctantly comes to his aid.

Wilhelmina “Willa” Pancake must focus on running her family’s ranch. With Israel’s hazy memory, she is unsure if she can trust him, let alone handle the budding attraction between them. And as men fight to steal her land and the truth about Israel’s past rides toward them, love is a risk she cannot easily take.

Yep, it’s that time of the year again. Time for a new Jo Goodman book to be released. No, I didn’t haunt netgalley waiting for any sign of it. Not much. Okay, not *that* much. Ahem. Once the file was in my hot little hands a quick refresh determined that it would feature the brother of last year’s story “This Gun for Hire.” But this is the bad brother, the dark to Quill’s light. Luckily for Israel, he gets a heroine just as strong as Calico.

First though, I’m going to reprise the first review I did of a Goodman book and call out the child character of this book. Annalea Pancake (where did they get this last name??) is darling and mischievous, intelligent and a trial to her elders. She grabs her scenes with both hands and along with her hound dog John Henry is a major delight of the story. I can see her with Finn. Can I put in my request for a book with the two of them? A reviewer can hope.

In fact it’s Annalea who saves Israel from the result of whatever he can’t remember happened the night before she finds him. But it’s Willa who calls the shots and has to deal with what – so to speak – the cat dragged in. Willa and Israel strike sparks from the moment they meet even if he is looking none too good. I love the dialog here with “cogitate” for “think” and “made his acquaintance” rather than “met.” The way Israel and Willa speak it’s as if they’re trying to out-laconic each other but with added dry humor.

They laugh together which is great since Israel is both honest and distressingly iffy about his past. He readily admits to being a man with a bad rep and past. His brother is the “always doing the right thing” brother while Israel lies by default, among other things. When can Willa trust him then? Eight weeks go by and the family knows little more about Israel’s past.

As per a much beloved Western trope, vaguely threatening neighbors are after the ranch and Willa is under pressure to marry. She conveniently gets fed up with the situation and makes a proposal of her own. Then she waits for Israel to ponder the proposition still not knowing what brought Israel to the area or who he met up with who wanted to kill him. Then Israel unloads another unresolved mystery bombshell on Willa. For someone she ought to have doubts about, she has a tendency to let things slid. This laissez faire stuff stretched my credulity. Then she marries him.

Once the marital intimacies – to borrow a phrase from Israel – begin, much time and effort is spent detailing them. Among other things, it shows their commitment to their wedding vows and the fact that Israel is slowly becoming a changed man. We also see that they don’t immediately fall into Perfect Married Compatibility. No, they need to work the kinks out of their pseudo shotgun marriage of convenience especially as Israel is only now beginning to reveal some of the automatic lies he reverted to in his early days at the ranch.

But finally cracks begin to appear in the mystery of Israel’s past. Plus Quill and Calico the Superb Bounty Hunter actually have a good reason to appear in this book. It might have taken a long time for the plot to thicken but once some secrets start being revealed … my goodness aren’t things getting interesting.

There are wheels within wheels and revelations springing out all over the place with quite a few more set to come. Willa learns that not insisting on the truth might lead to pain that’s hard to take. Israel learns telling the truth can hurt a loved one almost more than his usual fall back of lies. The threatening neighbors don’t even know something is up and a devastating event from long ago is about to come home to roost.

I like that Willa and Israel have to face and deal with these road bumps right then rather then let them fester. In romance, festering leads to Big Mis situations which I loathe. Willa’s reaction to what Israel tells her is also a big push in the completion of his “she makes me want to be a better man” evolution. The finale roars around the final turn and heads for home with all the plot threads weaving together as most the characters arrive at the same place in time for things to reach their conclusion. There might have been a few early draggy bits and the Pancake family certainly don’t push to know what danger might be lurking and waiting to leap at them via Israel. But as a good study of coming to terms with the bumpy realities of marrying someone with a murky past, in the second half this book bounced back and grabbed me, not letting go until justice was done and the good guys won the day. B