REVIEW: The Chief by Monica McCarty

I swore I reviewed this book before but I couldn’t find it in the archives so if you’ve read this, I apologize for the duplication. 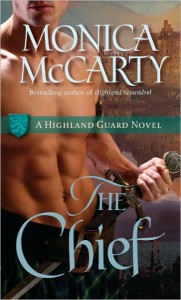 I tried your debut book and I’m afraid that I haven’t read you since but a friend of mine (can I say it was Angela James?) emailed me and said I might like The Chief. Then she invoked the magic Scottish comparison (magic for me at least). It reminded her of old school Julie Garwood. My fingers couldn’t type in the title and hit the buy button fast enough at that prompt.

I’m happy to say that I enjoyed The Chief and I could see some glimpses of Garwood, but it wasn’t quite the same. Garwood specialized in the clumsy, adorable despite herself heroine and the brooding but long suffering hero. The Chief features a kind heroine hoping for a better life for herself despite her angry, cruel father and the unrest in Scotland; and a brooding hero wanting to stay out of Scottish politics. The Chief equation is really Navy Seals meets Julie Garwood. (This assessment was confirmed by the author’s note at the end of the book and then all the promo pieces which I rarely read before I start a book).

Set against the back drop of the Western Isles of Scotland, The Chief explores the birth of the Highlander warrior myth. In 1305, Scotland was under the brutal boot of Edward I. William Wallace had just been killed in a gruesome fashion and Scotland floundered for leadership. Robert Bruce conspires with Harry Lamberton to create secret army of highly skilled, highly trained warriors who would employ guerrilla like tactics against the English. (The book refers to these as pirate style fighting).

Harry Lamberton is sent off to do Bruce’s recruiting. This story does not romanticize Bruce but rather characterizes him as an opportunist who was more interested in defeating John Comyn than the British. Lamberton and the others want Tormod MacLeod to lead this group and train these warriors. MacLeod’s legend is stories and while they acknowledge it is likely exaggerated, Bruce points out that “myth can be every bit as powerful as truth.”

Tor, as he is called, has no interest in training these warriors. Away from the borderland, the folks in the Isles have been able to remain mostly apolitical almost of a necessity for there are more internecine fighting than they know what to do with. Clan X is fighting against Clan Y and marginally suffering a truce with Clan W so that the two can ban against Clan Z.

Angus Og MacDonad, King of the Isles, dangles the comely marriage bait of the daughters of Sir Andrew Fraser in front of Tor but he isn’t biting. Fraser, imprisoned for years by the English, must have this alliance to crush the English. He threatens and drugs his daughter, Christina, into setting a trap for Tor. Christina wants to be married, wants to have a home away from her father, and looks upon Tor as a white knight when he inadvertently saves her from some brutes outside the walls of the keep.

Christina has been reading illicit copies of Lancelot and Guenivere’s stories and begins to create a little fantasy around Tor. She feels guilty at trapping Tor but is helpless. She is but a woman in a dangerous and physical man’s world.

Tor and Christina’s life together could have started out very poor based on this deception but the story does not rest upon that easy convention. Instead, Tor understands Christina is a pawn and does not blame Christina for her role. The conflict between Tor and Christina is one of duty over pleasure. As Christina begins to bring softness and liveliness to Tor’s austere keep, Tor becomes increasingly conflicted. Even though he enjoys his physical coupling with Christina, he sleeps each night with his clansmen in the great hall.

Tor’s devotion to his clan stems from seeing his enemies kill his father, rape and kill his mother and virtually destroy his clan. His entire purpose in life has been to become strong enough to prevent harm to his people. Even spending one night with Christina seems to threaten this. Tor is unable to create a balance between his need for Christina and his welcomed duty to the clan. The more that he feels for Christina, the more that he pulls away. Christina, of course, is bewildered and hurt by Tor. She’s not one to belabor her situation, however, and tries to make the best out of her situation. What makes this even more interesting was that Tor knew that Christina wanted more, maybe even loved him, and he had to resist any emotional softening as well.

I really enjoyed this “marriage in trouble” storyline and thought that the focus on a very natural conflict helped to offset part of the corniness of the story. The creation of the special forces team for Robert the Bruce seemed too steeped in modern day ceremony complete with nicknames for each operative, the corny name for the group and the ceremony. Tor was not a very romantic person and the nicknames, ceremony and name for the group seemed at odds with his practical nature. I could see those things coming from Christina but not from Tor. At one point, I wondered if the Scribe Virgin would make an appearance.

Interestingly, the Author’s Note added a huge sense of realism to the story but without the corniness. Having said that, I’m completely on board with the Highlander Guard books. B