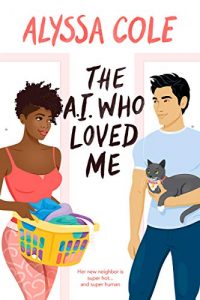 Trinity Jordan leads a quiet, normal life: working from home for the Hive, a multifunctional government research center, and recovering from the incident that sent her into a tailspin. But the life she’s trying to rebuild is plagued by mishaps when Li Wei, her neighbor’s super sexy and super strange nephew, moves in and turns things upside down.

Li Wei’s behavior is downright odd—and the attraction building between them is even more so. When an emergency pulls his aunt away from the apartment complex, Trinity decides to keep an eye on him…and slowly discovers that nothing is what it seems. For one thing, Li Wei isn’t just the hot guy next door—he’s the hot A.I. next door. In fact, he’s so advanced that he blurs the line between man and machine. It’s up to Trinity to help him achieve his objective of learning to be human, but danger is mounting as they figure out whether he’s capable of the most illogical human behavior of all…falling in love.

I saw this new novella of yours listed as an audiobook and though it looked interesting, I put off trying it as fiction audiobooks are more miss than hit for me. Then Kaetrin reviewed the audiobook and loved it. Just when I was getting ready to try listening to that, voila the ebook was released. Plus – cat!

Set in some future world that is somewhat similar to ours but with the problems on steroids, the plot revolves around Trinity Jordan, a recovering data analyst for a government-esque agency known as the Hive. She’s suffered from some horrific injury that has caused lasting damage not only to her leg but also has affected her with what sounds like PTSD. Trapped by it in her apartment complex, she undergoes mandated mental therapy sessions to help her and hangs out with two friends. Everything in the complex – which is run by the Hive – seems to be monitored and is my idea of AI hell taking over our lives and watching everything we do under the guise of “helping” us. [shudders] Imagine Alexa, Suri, and your appliances always on, always gathering information.

The age old “need to borrow something” brings Trinity across the hall to her neighbor, a top notch scientist at the Hive. There Trinity meets Dr. Zhang’s nephew who is introduced as Li Wei who has suffered a head injury and is recuperating. Suddenly Li Wei is around all the time, seemingly always near Trinity. At first she’s a little startled but doesn’t sense any danger from him, only a little strangeness in how he talks or moves which she puts down to his injury.

One day Dr. Zhang’s cat Tim appears and mrows insistently to Trinity who finds Dr Zhang down and fairly unresponsive except for a hurried whisper to “Take care. Take care.” Li Wei’s behavior during all this bewilders Trinity – it’s as if he doesn’t care about his aunt. But then Trinity realizes that Dr. Zhang’s whispered plea was for her to take care of Li Wei. Then things start getting really weird.

I won’t go into too much more detail as things will happen that are better encountered without spoilers. We know things about Li Wei that Trinity doesn’t but there are things neither of them know that will drastically impact their future. The story is told alternately from their PsOV but as I mentioned, there are things they don’t know.

The blurb spills that Li Wei is AI and a very advanced AI. He learns constantly and his algorithms are always updating and incorporating information. He’s growing and improving though this can lead to humorous or frustrating situations. Even Tim the cat knows when Li Wei has fucked up with Trinity.

Li Wei has studied Trinity enough to know that despite what the websites he scanned tell him about what he should bring on a date to show his appreciation of her, she would prefer a mallet to flowers that will eventually decompose. Ah, sweet love. But he still manages to unwittingly offend her because of his programming not being up to language nuances and flirting. Trinity takes some things Li Wei does or says personally when he only means them literally.

I liked the inclusion of SFX sounds in the text to heighten the feeling of the tech being used in the story. Some descriptions of this world are eased into the story such as the degree of skin melanin being a part of the criminal threat algorithms or global warming or the inference that all wild animals are now in zoos. But for the most part things focus on Trinity and Li Wei and their growing relationship.

There is a lot of action towards the end that I kind of expected though nothing was telegraphed which was nice. I was a bit confused about how Li Wei ends up with Dr. Zhang in her apartment as the story starts and how this remains a secret for so long. And though I remain optimistic that with their skills things will turn out fine in the end, based on the descriptions of the Hive, I need a lot of reassurance. But there is Tim the Cat! I love Tim though what does T.I.M. stand for? Maybe I’ll find out in the next story. B