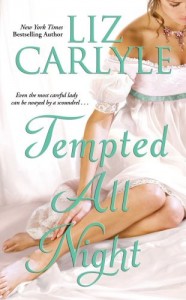 In contemplating your backlist, I’ve decided that you are one of the most consistent authors I read. My favorite book of yours remains the first one, My False Heart published back in 1999. I don’t know whether it is my favorite because it’s the first one I read by you or whether it is the one to which I respond best. Tempted All Night gives some tantalizing glimpses of future books featuring characters from My False Heart but the main protagonists in Tempted All Night is the sister of Stephen Nash from Never Lie to a Lady, Lady Phaedra Northampton, and Tristan, Viscount Avoncliffe.

Tristan has been estranged from his father for most of his life. He alternately tries to please his father one of England’s most valued statesmen (by warring in Greece) and by trying to further enrage his father (by acting the dilettante). His father, the esteemed Earl of Hauxton, is near death and begs Tristan to look into the death of a Russian who was connected to a Russian brothel owner known for catering to the most rapacious of tastes. In the dark hour before his father’s death, Tristan cannot refuse. This mission brings Tristan into contact with Phaedra who, along with Zoe Armstrong (bastard daughter of the Marquess of Rannoch), witnessed the last minutes of the Russian’s life.

Phaedra tries to keep what information she knows a secret because no one in her family knows that she is trying to help her maid look for the maid’s sister. Phaedra is not terribly good at keeping her secrets and Tristan is alerted to some discrepancies in her story.    Together they work to uncover the secrets of the brothel, the maid, and each other.

I read in another review (I think at Amazon) that Phaedra and Tristan are common characters in the romance genre. This is true. But they are so vividly drawn in both big and small ways. There’s a fabulously quiet scene that lasts about two pages wherein Tristan sits with his father, holding his hand, reliving some of the worst moments of their relationship but knowing that despite all that, losing his father will be awful and hoping for some measure of peace. Phaedra has all but retired from society, refusing to buy new gowns or partake in frivolity due to an episode in her past. She believes she is a woman not worthy of a good marriage and has resigned herself to being a bluestocking and eventually a spinterish bluestocking. These furtive outreaches at night are at once thrilling and a way to make the lonely life she foresees ahead of her bearable.

Even though the characters are recognizable there are little quirks or deviations from the expected paths that provide nice surprises to the reader.   You might not expect the outcomes for the father or the maid. Not everyone is set up to be the hero of another piece. Some people, seemingly good people, do unheroic things.

One big problem for me was that so many of the characters in the book were from previous books. I felt like I could have used a glossary or family tree. It was quite frustrating at times and the website is pretty useless to assist readers in refreshing their memory as to what kids belonged to what protagonist pairings   but look here is a link to the family trees so that readers can refresh their memories.   Thanks Growly Cub.   I swear I looked for this but couldn’t find it.