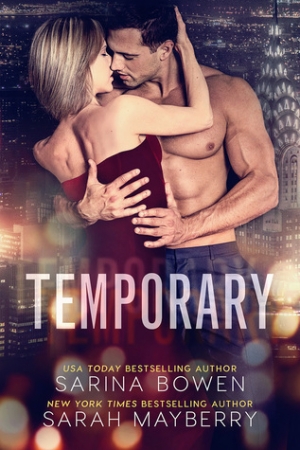 Disclaimer: I’m friendly with both authors online and have met Sarah in person a few times. She even sent me Kit Kats once (I won a giveaway). I know them both well enough to know that if I didn’t like one of their books I could say so freely and there would be no flouncing.

Grace Kerrington is temping at the New York offices of Walker Industries – an Australian import company (think beef) and is hoping against hope that she will land a permanent role there if she does well. Grace is raising her 15-year-old sister, Olivia, and money is extremely tight. Grace’s love is art and fashion but she switched to a business degree when she realised she would need to support Olivia. Grace doesn’t have official custody but her and Olivia’s mother is an absent drug addict so it’s not like anyone’s going to do anything about it.

On a day where Grace believes she could get fired for being late a golden opportunity is offered to her instead: Victoria Walker, the terrifying Australian matriarch of the Walker family and CEO of Walker Industries, asks Grace to catalogue and prepare for sale, the estate of Victoria’s late brother, Jack, who died suddenly the week before. Victoria has applied for probate and wishes to get things moving asap so that she can liquidate the estate pronto. Victoria is not what one would call a sympathetic character.

Callan Walker is Victoria’s son. He walked away from Walker Industries some years ago after a significant falling out with “Vicky” (his name for his mother). Callan was particularly close to his Uncle Jack however (another black sheep in the family) and is devastated when he learns of his uncle’s passing. Callan and Jack had discussed Callan being the executor of Jack’s will a couple of years before when Jack asked Callan to continue various philanthropic works Jack was involved in.

Callan and Grace meet at Jack’s swank Central Park West apartment. Grace is trying to gain a permanent job by proving herself in the task Victoria Walker set for her and Callan is desperate to locate a more recent will to oust Victoria from getting her mitts on Jack’s estate. In order to continue his search, Callan offers to help Grace with cataloguing the estate and they end up spending a lot of time together.

Callan is dark-haired Chris Hemsworth hot. In fact, he’s so hot, there’s even an app called “One Hundred Days of Callan Walker” which automatically sends a photo of the man himself as snapped by various paparazzi around the world to one’s phone. Olivia, because she is sneaky, installs the app on Grace’s phone and Grace is horrified when she cannot delete it (who would want to?). It makes for some lighter moments in a book which is heavily laced with Callan’s grief for the lost of his beloved uncle. However, I do have a bone to pick:

At three o’clock, my phone chimed with a text, which turned out to be a shot of Callan in a Speedo in Cannes.

It has long been my opinion that there is no guy who looks good in budgie smugglers. Points deducted for crimes against fashion Callan!!

Callan’s Aussie-ness is highlighted – I’d have known he was Australian because of the nickname he gave Grace if for no other reason. Nicknames are endemic here. It’s practically the law.

At first there is a level of deception on Callan’s part because he is obviously not honest with Grace about his quest for the will. However, this does not persist for long; he begins to know Grace and trust her and she’s a smart cookie so she works out there’s something else going on. To his credit, Callan does not lie directly to Grace – when she asks, he tells.

Grace is struggling for money and to provide security for Olivia. In a very real sense, she cannot afford to get distracted by Callan’s charm and good looks. And really, she doesn’t. It is his kindness that does her in. As they spend time together, she sees there is far more to him than a flightly and shallow playboy type, whatever the tabloids say about him. And Grace is touched by Callan’s grief for Jack and his desire to carry out Jack’s final wishes.

Grace is pretty and smart and honest and as Callan spends time with her, the guard he put up after Vicky interfered in his last relationship (to put an end to it) crumbles. Unfortunately there is a bit of “other women are rubbish but Grace is wonderful” in the narrative I could have lived without. A heroine doesn’t need to be placed above other women in terms of looks, depth of character or what amount of plastic surgery one has had in order to be a worthy heroine.

Callan was born wealthy and has never needed to be frugal. He does not, at first, understand what life is like for Grace and he is fairly cavalier about the consequences to her if his actions lead to her losing her job. He does end up getting it eventually though and when he does, he gives good grovel.

In some ways, Temporary is a Cinderella story, where Victoria Walker ably plays the part of the wicked stepmother. I have a soft spot for Cinderella so it worked for me.

Callan and Grace do have wonderful chemistry and there was a lovely sense of celebration to their intimate encounters.

What followed was a frantic reenactment of the Kama Sutra. There were probably yoga classes that used fewer positions than we did. It was energetic and combustible and joyful.

There were parts of the book which were difficult for me to read as our family has just suffered its own bereavement. Reading about Callan’s loss hit a little close to home at times. I guess that means it was written with heart and came across as authentic.

I enjoyed Grace’s friend, Jasmine, and their dynamic and I loved the relationship between Grace and Olivia. It wasn’t at all saccharine, rather it illustrated the push/pull of raising a teenager while clearly showing the strong bond between them. I also loved how seamlessly Callan fitted himself into their relationship and how he never balked at Olivia’s place in Grace’s life.

Olivia was a little ahead of us on the sidewalk, so I took the opportunity to stand on my tiptoes and press a kiss to my new boyfriend’s mouth. “I will.”

From up ahead came a critical voice. “You guys are like the worst Hallmark card ever. I should put this on Instagram and we can watch the world throw up.”