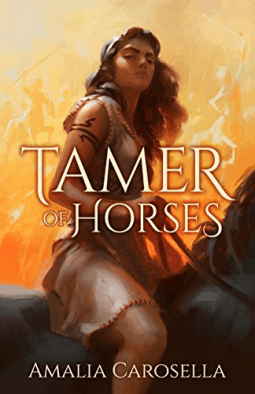 More than two decades before the events of Helen of Sparta…

Abandoned as a baby, Hippodamia would have died of exposure on the mountain had it not been for Centaurus. The king of the centaurs saved her, raised her as his own, and in exchange asks for only one thing: she must marry the future king of the Lapiths, Pirithous, son of Zeus, and forge a lasting peace between their peoples by giving him an heir. It would be a fine match if Pirithous weren’t more pirate than king and insufferably conceited, besides. But Hippodamia can hardly refuse to marry him without betraying every hope her people have for peace.

After the death of Dia, queen of the Lapiths, tensions are running high. The oaths and promises protecting the Lapith people from the Myrmidons have lapsed, and the last thing Pirithous needs is to begin his kingship by making new enemies. But not everyone wants peace on the mountain. There are those among the centaurs who feel it comes at too high a price, and Peleus, King of the Myrmidons, lusts for the lush valley of the Lapiths and the horses that graze within it. Pirithous needs a strong queen at his side, and Hippodamia will certainly be that—if he can win her loyalties.

But no matter their differences, neither Hippodamia nor Pirithous expected their wedding banquet to be the first battle in a war.

How could I not want to try this book? The cover is eye catching and, hey!, Greek mythology. I used to lap up Greek mythology though I didn’t recall too much about this myth beyond the basics. So alright off we go to the bronze age.

This is ancient Greece when men thought little of taking servants and slaves to bed – certainly Pirithous doesn’t but, as he reminds his friend Theseus, he always makes sure the women are willing and leave his bed satisfied. Well, okay then. I actually liked that Pirithous isn’t made to be a sensitive new age man. Will Hippodamia be able to change his ways?

Hippodamia doesn’t arrive at Pirithous’s palace expecting hearts, roses and twue lurve. This is a political alliance and Pirithous has taken his sweet time since the arrangement was made five years ago in taking her as his bride. She does hope to respect and like him and given a minimum of respect in return things would have started off on an even keel. Unfortunately, Pirithous missteps due to his (unwarranted) concern that Hippodamia has cavorted with a centaur.

Insulted that he would even think her adopted father would offer her as a bride had this happened, Hippodamia is in no mood to forgive this slight to herself as well as her people. When the priest reads the auguries as needing them to wait for 7 days before consummating the marriage in order to ensure fertility and children, she’s not upset. Pirithous might be pissed at the wait but he needs sons as heirs as well as to solidify the peace so reluctantly – Hippodamia does clean up well – he agrees.

With wedding guests Theseus and his Amazon bride Antiope offering advice and admonishments, Pirithous and Hippodamia begin to work towards détente and no one said that couldn’t also include physical pleasure – just no PIV. Antiope gives Hippodamia some tips while Pirithous is confident with his skills. As a son of Zeus with boundless sexual prowess and stamina, he’s got reason to be cocky – pun intended. After a week of getting to know each other – and I think you know what I mean – it’s time for the wedding but things don’t go according to plan.

First jealousy rears its ugly head, then the priest checks the auguries again and it’s more bad juju but after waiting a week to consummate his marriage, Pirithous is in no mood to put things off even another day. Too bad as the next part of the myth kicks in with a brawl that descends into anarchy, rape and death. Not the wedding feast anyone was looking forward to enjoying.

Now what to do? His people demand blood revenge on the centaurs, a neighbor who helped stir the massacre pot is poised to take advantage of any weakness Pirithous shows and Hippodamia despairs of the Lapiths ever accepting her as Queen after what her adopted people did. Will her sacrifice in agreeing to marry Pirithous be in vain? Will the Lapiths demand her death as they hunt down the centaurs?

This is a world of mythology but also was once a real civilization with their own certain beliefs and societal mores. I’m glad you wrote the book to allow for all of it instead of whitewashing it to fit our sensibilities. It’s not always easy to read, especially the sacrifices they felt needed to be made to the gods for answers to their problems and prayers, but this is how it was for them. This is also still a world where kings ruled at the will of their people and needed to be ready to “go the distance” if needed to lead and save them. Royalty weren’t mere figureheads.

Given the title and cover, I knew Hippodamia would be a strong woman and she is in this world when most women stayed at home, spinning and childrearing. But there were strong women including Pirithous’ own mother who lead her people thus easing the way for them to eventually follow Hippodamia. I also liked the relationship between Amazon Antiope and Hippodamia. Seeing his bestie Theseus in a strong marriage of equals with his Amazon Queen already helps set up Pirithous to, unconsciously at first, want the same.

Anyone who’s read Greek myths or the Iliad knows of the pride of these men and how it often lead to tripping them up. That’s certainly the case here and it takes these two strong and proud characters a while to work this out. I like that there is give and take on both sides. The long term outcome of their marriage is part of the mythology so while it’s sad, the bittersweet ending meshes with the story no matter how much I wanted it to be otherwise. Still I enjoyed watching these two come to a relationship of equals and love. B