REVIEW: The Summer Before the War by Helen Simonson 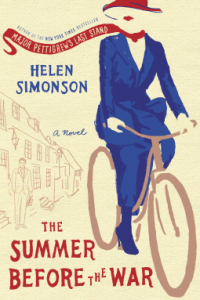 East Sussex, 1914. It is the end of England’s brief Edwardian summer, and everyone agrees that the weather has never been so beautiful. Hugh Grange, down from his medical studies, is visiting his Aunt Agatha, who lives with her husband in the small, idyllic coastal town of Rye. Agatha’s husband works in the Foreign Office, and she is certain he will ensure that the recent saber rattling over the Balkans won’t come to anything. And Agatha has more immediate concerns; she has just risked her carefully built reputation by pushing for the appointment of a woman to replace the Latin master.

When Beatrice Nash arrives with one trunk and several large crates of books, it is clear she is significantly more freethinking—and attractive—than anyone believes a Latin teacher should be. For her part, mourning the death of her beloved father, who has left her penniless, Beatrice simply wants to be left alone to pursue her teaching and writing.

But just as Beatrice comes alive to the beauty of the Sussex landscape and the colorful characters who populate Rye, the perfect summer is about to end. For despite Agatha’s reassurances, the unimaginable is coming. Soon the limits of progress, and the old ways, will be tested as this small Sussex town and its inhabitants go to war.

After I read “Major Pettigrew’s Last Stand,” I would periodically check book and review sites looking for what you’d write next. When I saw this listed I immediately thought “YES! Gotta get it! Want now!” Unfortunately some waiting ensued but it was all worth it.

The book starts out with subtle, sweet humor amid – well, yes – the summer of 1914 in a small English village. Scenes of village life, political maneuvering among the female movers and shakers who jockey to pull the strings and dictate How Things Will Be Done mingle with the views of outsider Beatrice who has arrived to teach – gasp – Latin at a local school. A woman? And one who rides a bicycle?? Well, that’s going to raise eyebrows and elicit shock in this age of changing politics and worker’s and women’s rights. Even the woman who championed Beatrice’s appointment closely questions Beatrice to make sure she isn’t a closet suffragette.

The first hundred pages are like watching a period Merchant Ivory film with lovely green English village life and everyone in their striped flannels and cartwheel sized, tulle covered hats over crisp white linen dresses. Servants silently toil for those whose noble pedigree has solidified into stone. Ominous chords sound in my head when one upper class Englishwoman is introduced as the wife of a German baron. These people won’t come to a happy ending, I know even if they don’t.

When the efforts of those trying to avoid war fail, England and Rye patriotically swing into action even if that action is of little practical use. The minutes from one Rye town meeting say it all as it’s clear people have no idea what horrors lay ahead. A foretaste arrives in the form of traumatized Belgian refugees fleeing from the Hun. The ladies of Rye compete with each other over who can scoop up the (socially) best refugees while Lady Emily works to convert (only) part of her stately home into a (British officers only) convalescent hospital. Meanwhile Hugh – though horrified at the thought of advancing his medical research studies via injured British soldiers – finally yields to the inevitable and signs up to join his professor in the Medical Corps.

By October, reality is beginning to set in. Aunt Agatha, the rock upon whom so many have depended, is increasingly distressed to read first the rushed engagement announcements in her ladies periodicals followed by the announcements of the marriages that were to have taken place but which now never will. Her only comfort is that Hugh will be behind the front lines and Daniel far from them. This complacency is shattered when events conspire to propel Daniel into a frontline regimen ironically in order to protect him. Agatha has to face the fact that while she was enthusiastically drumming up support for the war when it was being fought by other women’s sons, now it is she who faces potential bereavement.

Meanwhile, Beatrice continues to fight her own battles both against the sullen Upper Form students who are less than enthusiastic about learning Latin and with the trustees of her inheritance from her father. Her sunny, contented memories of their peripatetic academic life begin to develop shadows as she finally realizes the restrictions his instructions will place on her independence. At the same time, other eccentrics in the village and the plight of one of the Belgian refugees hammer home the social inequalities and innuendoes women have always faced and, still today, continue to be subjected to. In the person of one of her promising students, she sees the limitations of social class still solidly in place.

The final section set in the field hospitals and trenches of the front is alternately black comedy and stomach clenching horror. It’s Dante’s Inferno come to life crossed with jaw dropping amazement at the insistence on the regimental silver being brought up to the front for a formal dinner with the Brigadier – a man I could cheerfully have reached into the pages of the book and slowly strangled myself. Bill and Archie, however, are cheeky princes among stretcher bearers.

The story and characters limn the immense social changes this world experiences. The old world, already tottering, came crashing down on its bewildered inhabitants’ heads. So many of these issues are still prevalent today but one of the major strengths of the book is that they are presented in terms of that time and those people. The story telling doesn’t come off as a photograph of 1914 heads transposed onto 21st century bodies. “The Summer Before the War” is a lovely tale of humor, pain, loss, grief and love. It is a reminder that some things never change be they small details of every day life or major truths of human universality. B+