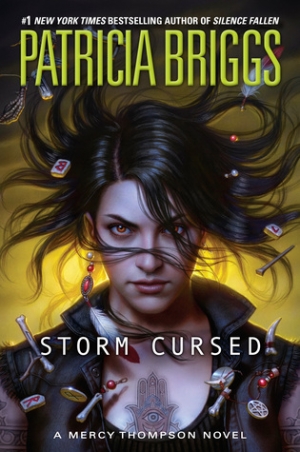 Series spoilers follow: For readers who haven’t read the series, this is not the book to begin with – start at Moon Called, book 1.

Content warning: depictions of violence and torture of people and animals.

I enjoyed Storm Cursed much better than Silence Fallen. For starters, Storm Cursed does relate more closely to the Columbia Basin Pack and their claiming of the Tri-Cities territory (which occurred in Fire Touched) and, there is not a long period where Adam and Mercy are separated. There is no Adam POV but I wasn’t disappointed by the trade-0ff.  Mercy is her usual badass self and gets to shine in this book, while still getting help from others.

I do feel like I need to to a complete series re-read/re-listen because I’m beginning to lose track of the dense worldbuilding – or at least some of the characters within it. Then again, it has been two years since the last Mercy book was released so that probably explains it. I expect I will pick up some things in Storm Cursed that I missed if the previous books are fresh in my mind. As your books are ones which tend to grow on me even more on repeat this is not a hardship.

The plot is fairly simple; black witches move into the Pack’s territory and Mercy, Adam and their friends act to remove them. It’s a lot more complicated than that of course. These are powerful witches and there are other things at play as well. The humans and the fae are about to commence peace talks and certain factions are just not into it. Revelations about a recurring character have profound impacts and we also learn a bit more about the mysterious Sherwood Post.

I did have questions about a couple of things near the end – to ask them would be too spoilery of course but these were fairly small things.

The action moved at a fast clip and I was caught up in the story almost the whole time. I did wonder a little at some absences – Jesse, Daryl and Honey were barely in the book. Bran doesn’t make an appearance at all. (I suspect after the revelation in the previous book this might be somewhat of a relief to some readers though.) On the other hand, there was plenty of Zee and Tad and that’s always a good thing.

Where I stumbled in Storm Cursed was the politics. There was a fair amount of it in the book and I’m not talking Pack politics either. I mean, US politics. In my Mercy head-canon, Trump is not the current president because I just cannot with Adam voting for that guy. It was bad enough learning that Adam is a Republican. And, sure, on some level I guess it makes sense. He was born in Alabama in the 1950s. He is conservative by nature. But the GOP isn’t just Trump. The GOP is Reagan and Bush (both of them); it is the party of the Southern Strategy and the one currently trying to overturn Roe v. Wade. It gave me a bad feeling to think that Adam could support them. In the end, I had to think of the Mercyverse GOP as some kind of idealised GOP which isn’t so many things I do not like and cannot respect – although it was a struggle and I didn’t entirely succeed. It intruded upon my enjoyment of the book. Adam has long been one of my very favourite heroes but his shine has somewhat tarnished for me now, I admit. I would really much rather have lived my life not knowing this about Adam. But it is impossible to ignore it. It is explicit in the book. To be honest I’m more upset about this than I ever was about Bran.

I had missed Mercy – I hadn’t realised how much until I spent some time with her again in this book.  I love her bravery and her fierceness. I love her cleverness and her wry humour.

There are some lovely sections with Mercy and Adam, where he’s hurting and she is supporting him, where they are working together, where they are just loving one another. As a romance reader I can’t help but gravitate to them.

I also liked the development of the relationship between Mercy and Mary Jo and how things are settling out with Mercy and the wider Pack.

There was a lot to like in Storm Cursed – I’m sure my grade would have been higher without the intrusion of politics but as it is I’m going with a B.