REVIEW: Son of the Morning by Linda Howard

The re-release of one of your only time travel novel provided a perfect excuse for a re-read. Son of the Morning was first published in 1997. It’s an unusual romance in that for much of the story, Grace and Niall, the two main protagonists are separated by the dimension of time. While I remembering enjoying Son of the Morning when it first came out, I think I appreciated the richness of the development more this time around, likely because I knew what awaited me. This book is time travel + mysticism + suspense all in one volume. 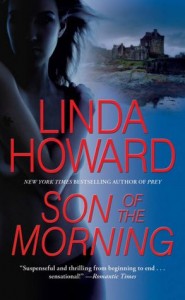 Grace St. John lives an ordinary and fulfilling life with her husband Ford. She met Ford through her brother Bryant and everyone has remained close (Bryant lives on the other side of the duplex that she and Bryant inherited). Grace is a translator of ancient texts. One night she traipses next door to receive computer assistance from her nineteen year old genius neighbor, Kristian. She returns home only to see her husband and her brother killed by her boss, Parrish. Devastated and terrified, Grace flees. After some time, Grace becomes convinced that the reason Parrish is determined to kill her is because in the course of her work she comes across a document pertaining to the Knights Templar. (I think it is important to remember the date in which this book was published because it predates all the Dan Brown stuff).

Grace is actually translating the 700 year old writings of Black Niall. At the time of her husband’s death, Grace has only managed to translate 10% of this document but she is determined that the text holds the answer to Ford and Bryant’s killings.

Niall of Scotland becomes a Templar, a warrior monk, because, well, the text of the book explains it best:

Niall had been forced into the Brotherhood, for of course a monk could never be king; a king must have at least the possibility of children, for kingdoms were built on continuity. His illegitimacy should have been an unsurmountable barrier, but even at a young age Niall had been tall and proud, intelligent, cunning, ruthless, a born leader; in short, he had all the characteristics of a great king. The choices had been simple: kill him, or make it impossible for him to be king. Niall was loved by his father and half-brother, so there had really been no choice. The young man would be a servant of God.

His half brother is, of course, Robert the Bruce. Over time, Niall’s believe in God erodes as he watches his Templar brothers hunted, burned, killed all under God’s name. Throughout time, his family became his brothers of the Knights Templar and as they died one by one, Niall’s devotion became embittered. When he is called upon to be the Guardian, Niall refuses to swear to God, but instead promises on the blood of his brothers to protect the treasures imbued to his defense.

The story really revolves around Grace. With the help of her genius neighbor, Grace gets enough money to leave town. She’s only got one goal in mind: survive to find the answer of her husband’s death. Grace is inept at it at first. She gets mugged at an ATM. She spends too much replenishing basics at the big box store. She makes a believable transformation from timid scholar to capable fugitive. She uses every skill at her disposal: her intelligence; her quick wittedness; her determination. She’s not physically strong and described as petite and small. But she’s observant and thinks on her feet. Through her research and translation, she becomes closer to Niall. She begins to view him as her talisman. She thinks about what he would have done in her shoes. The thought of him provides her courage and encouragement.  What she begins to feel for Niall is at odds with her grief. I felt the discovery of a new love was well done, not diminishing her feelings for Ford, but allowing a place for Niall.

Niall shares equal page time. There are plenty of scenes from his point of view. Niall’s character arc mirrors Grace’s a bit. He grieves the loss of his brothers and while he might not admit it, his faith. He spends his time alone, his task one only he can carry out.  But Niall doesn’t undergo a transformation.  He’s accepted his role, albeit reluctantly.

While Grace and Niall don’t meet face to face, they share mutual dreams of each other. Hot, lusting dreams and their mental bonds draw each other closer until its brings them physically together. I think this is a clever use of the time travel concept because it skirts the issues of time travel books bring up as it relates to parallel dimensions. Niall’s duty as Guardian is to protect the artifacts of Jerusalem at all costs. It is this power that sends him throughout time to dispatch this duty. Thus Niall isn’t immortal, exactly, it’s just that time affects him differently. The mysticism is bound up on the intent of the action. “Only for the sake of God may the secret be used.”

This is not a perfect story. A little too much emphasis is placed on Grace’s ordinary looks and her loss of weight over the course of her adventure (although it should be noted that Grace’s husband adored her). Grace and Niall are separate for most of the book. In some ways, this is a fated mate story. Destiny draws Grace and Niall together and their feelings for each other develop in ways that require some leap of faith.  There are some convenient occurrences that allow Grace to prevail on more than one occasion and probably some historical inaccuracies (although I didn’t notice any).

Yet, it’s a compelling story and imbued with the fun of adventure, conspiracy and mysticism. There is a great blend between nerdy translation of texts and action and danger as Grace tries again and again to avoid capture.  Grace is a fantastic heroine and Niall is a classic Howard hero. It’s hard to grade this book but I’d probably give it a B+.