Let me begin by stating that I am leaving Someone to Care ungraded. I enjoyed the first 79% of this novel tremendously and was thinking this was the best new Mary Balogh book I had read in ages. Then, at the 80% mark, something was revealed that threw me for a loop. It involves a spoiler (one I have hidden), a potentially triggering one that disturbed me. I don’t know how to reconcile my enjoyment and uneasiness to a grade; therefore, there will not be a grade on this review. 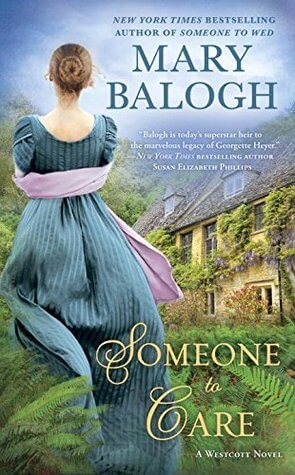 Marcel Lamarr, Marquess of Dorchester, is stranded at a remote country inn with his brother André when a horseshoe comes loose on one of his carriage horses, leaving him at loose ends. Not that the widowed, thirty-nine year old Marcel has led a life of industry. For the past sixteen years, he has avoided his responsibilities, which are many, and include his son and daughter, Bertrand and Estelle, seventeen-year-old twins.

There is almost nothing I dislike more in a romance than a neglectful parent, but I didn’t have a big problem here, because it is amply evident that Marcel loves his children and has only left them in the care of their strict aunt and uncle (but for biannual visits) because he genuinely believes they are far better off with Jane and Charles than with him. There is a tragedy in Marcel’s past that he blames himself for, and he carries a great deal of guilt.

Who should Marcel spot at the inn but Viola Westcott née Kingsley? Fourteen years ago, Marcel had a flirtation with Viola, but she, a married woman with young children, sent him away and nothing ever came of it. More recently, Viola’s late husband was revealed to be a bigamist and her marriage to him invalidated.

Marcel doesn’t know that the forty-two year old Viola, mother to three grown children, goes by Miss Kingsley these days, but he wonders if she would be more amenable to an affair with him now. On a whim, he sends André home in his carriage, thus stranding himself at the village, where an end-of-harvest celebration is to be held to raise money for a new church roof. Marcel invites Viola to explore the festivities with him.

For her part, Viola is also stranded, in her case due to a near-broken carriage axle. Before she arrived at the village, Viola was in Bath, where the Westcotts, her late faux-husband’s family, had gathered to celebrate the christening of Viola’s youngest grandchild. Viola had been looking forward to the reunion but once her former relatives arrived, some part of her snapped and she had to get away. Now Viola is alone, as she insisted on being, but at a village inn, rather than at home. She debates with herself about accepting Marcel’s offer but ultimately says yes.

Viola and Marcel have a wonderful time at the village celebration, purchasing each other a horrid handkerchief and gaudy jewelry, dancing, and discovering that their attraction is as powerful as ever. They spend that night together, and in the morning, almost part, before Marcel, thinking of the unpleasant responsibilities awaiting him at home, impulsively proposes that they run away together for a week or so, and Viola even more impulsively agrees.

Viola writes to her daughters and her housekeeper that she is joining a friend for a week or two and not to worry about her, but the letters, tucked into a maid’s apron, end up in the inn’s laundry, ruined and lost.

Viola and Marcel meander on their way to his Devonshire cottage, located above a beautiful valley near the sea. Their sojourn at the cottage is lovely, punctuated by countryside walks, lovemaking, and genuine conversations. Viola discovers that there is more to Marcel than she thought and that, just as she did fourteen years ago, she is falling in love with him.

But of course, this idyll cannot last forever; the world is bound to intrude. When it does, Marcel and Viola are on the outs, each believing that they are alone in wanting the relationship to last.

There aren’t many historical romances about older characters, much less older characters who spontaneously take off together without benefit of marriage to escape their responsibilities. That aspect of the novel made it feel quite fresh. I could believe that Viola, having already been “ruined” by her “marriage” to a bigamist, might agree to this because she didn’t feel she had much of a reputation left to jeopardize.

As I said before, I loved a big chunk of this novel to bits. A lot of this is due to Viola’s character. It was wonderful to read about a forty-two year old heroine, but beyond that, there was also something touching about a woman who had kept to the straight and narrow all her life only to lose her place in society anyway throwing caution to the winds to grasp at some happiness for herself. Viola also had a quiet dignity that she could retreat behind when necessary. In the second half of the book, she finds herself in some rough waters with Marcel’s family, but she navigates them with fortitude and poise.

Although Marcel did not appeal to me quite as much, he had a roguish charm and a protectiveness of Viola and even of her daughter Abigail that I liked. I also had a great deal of sympathy for him. Who among us has not procrastinated facing the things that scared us? It wasn’t because Marcel didn’t care that he avoided his responsibilities; it was because he cared a great deal.

Further, Marcel had a wry sense of humor that tickled my funny bone and he was self-aware enough to admit his faults easily.

The thing was, though, he did not want to start looking at things from other people’s point of view. His own was quite bothersome enough.

But his heart ached a little bit. Well, a whole lot if he was going to be honest with himself.

On the whole it was easier not to be honest.

All of the above won me over, and I was hugely enthusiastic about the book until I hit the 80% mark. This is where the nature of the tragedy in Marcel’s past is finally revealed.

When the twins were a year old, Marcel and his wife, Adeline, led a “busy social life, dancing, drinking, attending parties late into the night.” One such night, Marcel and Adeline returned home late from an assembly, feeling amorous. Adeline went to bed to wait for Marcel and Marcel looked in on the children. But the kids were teething and the nursery maid was exhausted and had a splitting headache. Marcel sent her to bed and stayed up with the babies himself. He had finally gotten the children to fall asleep, one on each shoulder, when an angry Adeline arrived to confront him.

Adeline was furious with him, and with the nurse for leaving. She told Marcel she’d been unable to sleep and would dismiss the nurse the very next day. Marcel whispered to her not to be ridiculous and to hush, and Adeline rushed to snatch Estelle from his arms and set her in her crib. Estelle woke up and began to cry, waking Bertrand in the process. Adeline tried to snatch Bertrand away too, and in that moment, Marcel shoved her with his free hand.

Adeline stumbled back, caught her foot on the hem of her dressing gown and reached back to steady herself against the wall. But there was no wall there, only a window which Marcel had opened earlier. Marcel tried to reach Adeline, to grab her, but it was too late. Adeline had fallen to the balcony below. He ran down and screamed, but she was dead.

It is stated early in the novel that Marcel is rumored to have killed his wife, and even before the midpoint, he tells Viola that he killed Adeline, but refuses to discuss it further. Having read umpteen romance novels in which the hero blames himself for a loved one’s death, I assumed, up until I reached the 80% point in the novel, that as in those other books, Marcel’s claim to have killed Adeline was merely guilt talking, and in reality, he was blameless. Needless to say, this was not the case.

I’m not sure what to make of this authorial choice. On the one hand, it does give Marcel a very strong motive for having stayed away from Bertrand and Estelle for the better part of sixteen years. But on the other… It’s pretty clear in the novel that Adeline’s death isn’t something Marcel intended and that it devastated him. He is not portrayed as an abuser but for this one incident. But domestic violence is never okay, and I don’t think this is stated strongly enough by the other characters.

I also feel that while Adeline isn’t demonized, she is portrayed as somewhat self-centered, thus signaling to readers that we shouldn’t mourn too deeply for her, and that bothers me.

Since I can’t imagine a heroine being given Marcel’s past, that of having shoved a husband, one who was not abusive, to his death, however unintentional that result, I feel that the novel depends on its readers having been socialized to view a woman’s life as being “less than” that of a man.

Further, in real life, people usually don’t generally shove, much less kill, their spouses except as part of a consistent pattern of abuse, so why give a romance hero this kind of past, and whitewash such behavior? I would much rather that he wasn’t responsible for his wife’s death, even if that made his self-blame a little less understandable.

Besides this, I also had a few other, less troubling issues with the book. I didn’t buy that Marcel, conscience-stricken as he was, could ever really forgive himself for his past. I thought that in the flashback scene to the trauma, events unfolded in an unlikely and contrived way. I was uncertain whether Viola could go away with Marcel for weeks and not face more social censure than she did. And I was also a little confused about the circumstances around Marcel and Viola’s flirtation of fourteen years earlier.

(On the one hand Marcel says he has never slept with a married woman and never would have with Viola when he believed her married to Humphrey Westcott. But later, he states that he only left when she sent him away because he loved her. That implies that if he hadn’t loved her, he would have seduced her, despite her “married” state.)

All these were more minor issues for me, though. To be clear, I enjoyed this book a great deal. I loved Viola to bits and I felt for Marcel. I finished reading the book—I have a weak spot for redemption stories so I appreciated seeing Marcel begin to make amends to his kids for his long absence in the novel’s final stretch.

I still have some interest in the other Westcotts’ stories, too – Elizabeth’s, Abigail’s, and Harry’s. I even (in my heart of hearts) hope Matilda will get a secondary romance in one of their books; she deserves to be more than comic relief. But none of the above is enough to assuage my uneasiness with Marcel’s past.

It is not that I question whether Marcel deserves forgiveness—I believe that most people who feel genuine remorse do, and I would include him among them—but rather that I question why the book went there with his character at all. I wish it hadn’t, because then I would have been able to give it an A- grade without reservations. Now, I can’t give it a grade at all.