AJH is not just a muser of books but also a published author. When he first approached me to do guest reviews on Dear Author I was hesitant because I did not want the guest reviews to be a platform for promoting his work. The DA readership did not deserve to be used in that fashion. I was also concerned because of the potential conflicts of interest.

Because AJH’s book is now published, there have been blurbs provided to him by various authors. In order to maintain fairness and impartiality, I have asked AJH to not post reviews of books by those authors as it would appear too much like quid pro quo. He has agreed to refrain from posting them here although he may post them at another venue.

There may be a time when AJH’s conflicts are simply too numerous for us to manuever about and at that time, we will likely have to say goodbye to AJH as a reviewer. Please keep in mind that the review list of books AJH has is not set in stone and can, and likely will, change as time goes on and we must accommodate further publishing relationships of this reviewer.

Thundercats are Go – Slave to Sensation by Nalini Singh

This is a bit of a departure from my usual format, in that I’m actually reviewing a book I read about a year ago, but since I’m technically on holiday and having to take a bit of a break from the one-book-a-week format, I thought I’d fill in the gap by putting together my belated thoughts on Slave to Sensation. 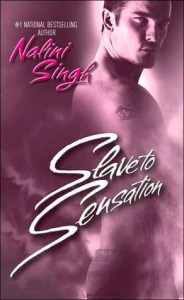 This will involve spoilers, by the way.

As I said in my review of Angel’s Blood a long time ago now, I really appreciate how completely left-field cracktastic awesome Singh’s worlds are. And looking back at the book for the purposes of this review/retrospective/thingy I think the clearest illustration of how completely nuts this setting is can be found in the opening line:

In an effort to reduce the overwhelming incidence of insanity and serial killing in the Psy population, the Psy council decided, in the year 1969, to institute a rigorous program called Silence.” (P. 1)

Now throughout the novel, the Psy get a lot of flak for the whole Silence policy – which admittedly is clearly a flawed and oppressive way of dealing with generations of human beings – but let’s be fair to them here, when the problem you’re trying to solve is “overwhelming incidence of insanity and serial killing” I can sort of see why you’d be tempted to wheel out the nuclear option.

Although thinking about it, I’m also not sure I’d trust a policy formulated by a body whose members hail from a species that is explicitly renowned for containing an overwhelming number of insane serial killers.

Anyway Slave to Sensation is set about a hundred years after the Silence policy was first introduced (notice that this makes it sort of SF, but set in the future of an Urban Fantasy universe, which is kind of cool) and the Silence policy has been fully implemented, causing the Psy to feel no emotions whatsoever – sort of like the Vulcans. This, according to the Psy council means that the Psy are now incapable of violence. And although I’ve just defended the Silence policy as being understandable given the problem it was designed to address, it’s fairly clear that the Psy council invest just a little bit too much in its infallibility. Again, much like the Vulcans. If nothing else, I can’t help but be a bit surprised that nobody in either Psy (or, for that matter,  Vulcan) society stood up while they were discussing this policy and said “hang on a second, don’t we call people who experience no emotions sociopaths”.

Anyway, the Psy aren’t alone in their world. They share it with the Changelings – people who transform into animals and who pretty much represent the other end of the rational-emotional spectrum. I think (but I confess I don’t remember that clearly) that there are normal humans in the world as well, but it’s been a year so I might be misremembering. The plot of Slave to Sensation revolves around the relationship between a Psy (Sascha Duncan) and a Changeling (Lucas Hunter – love that name). They meet because Sascha’s mother wants to negotiate with Lucas’ pack in order to win a lucrative contract to build bespoke housing for Changelings (whose needs are naturally very different to those of Psy or humans), but Lucas has an ulterior motive, because one of his packmates has been murdered and he’s convinced the killer was a Psy (it’s been a long time so I can’t quite remember his reasoning, I think it’s a smell thing). To track the killer, he needs somebody with access to Psynet, the Psy shared consciousness.

The book felt to me (as best I can remember) like it was resolutely Sascha’s story. The Silence didn’t work for her, so she feels emotions in a way that other Psy don’t, and the the book is far more about her learning to cope with the emotions she has been taught to repress than it is about catching a serial killer. I’m honestly not sure if I was supposed to find the identity of the murderer surprising (there are only three Psy in the book – Sascha, her mother, and a man who is blatantly evil – guess who the killer is), and really the serial-killer plot isn’t so much a mystery as a journey on which Sascha learns that pretty much her entire existence is based on a Jenga-tower of lies. I sort of assumed that it was meant to be obvious who the villain is from the outset, and the narrative tension is supposed to come from watching Sascha come to terms with the realisation that the events she is witnessing prove that everything she believes is false, and that she has both power and value, just not in ways that are recognised by Psy society.

It occurs to me, incidentally, that this was a remarkably deft way to establish a sense of world in the first book. By giving us a heroine whose worldview is constantly being challenged, the reader is able to learn about the reality of the setting at the same time she does, without her having to be arbitrarily clueless about the society she grew up in. (I mean, she is clueless about the society she grew up in, but for perfectly sensible reasons to do with it being all totalitarian and brainwashy).

I got on less well with the Changelings. It’s not that I disliked them per se, it’s just that – as I think I mentioned in my review of Angel’s Blood big cats just don’t really do it for me. Plus because they’re pack animals there are rather a lot of Changelings in the book, and I had tremendous difficulty keeping track of them all. Of course the upside to this was that Hunter’s pack felt like a real thing that really existed and had its own internal dynamics, rather than being sort of a backdrop or accessory, existing only to provide the hero with something to be the alpha of. That said, a year later I remember very little about Hunter’s pack except that I think there were kittens in it? I mean, not as a major feature or anything. I have a sort of vague feeling that the later books focus more on the other pack members, so not remembering the first thing about them might make it a bit difficult for me to pick the series up again at this point.

Overall I liked the book. I wasn’t so immediately gripped by it that I ran out to get the second, but I was left with sufficiently positive feelings about Nalini Singh’s work that I made Angel’s Blood a priority once I started reviewing at DA. I did have a couple of minor quibbles with the setup, most predominantly that the balance between the Psy and the Changelings seemed a little off, metaphor-wise. I kind of got the impression that the Psy were supposed to represent, y’know, the rational side of humanity while the Changelings were supposed to represent the emotional side. Now I admit to a bit of a bias here, because I’m kind of more of a Psy than a Changeling, but I sort of got the impression that in this reality “rational” meant “asshole” and “emotional” meant “basically alright dude.” And I get that the Psy had basically Gone Too Far, and that by switching off all of their emotions they had taken a self-destructive course of action that was ultimately destroying them from the inside, but there seemed to be no equivalent on the Changeling side of the equation. I’ve not researched the series in much detail, but I seem to recall seeing comments from one or two people who felt that the series seemed to lean too much towards the assumption that emotions were inherently good and reason was inherently bad. Obviously that’s not something that I can comment on in much detail having read one book a year ago, but it reinforces the mild impression I took away from Slave to Sensation. I understand that the most recent entry in the series Heart of Obsidian is actually the first book so far to feature a Psy/Psy couple (am I completely wrong about that? I could be completely wrong about that).

Probably the thing I remember most about Slave to Sensation, apart from the fact that, just like in Angel’s Blood, there’s an awful lot of nipple-biting involved. Like more than I would normally expect. Apart from that, the thing that I remember most is the sheer amount of stuff that gets introduced. There’s the Psy, there’s the Changelings, there’s the relationships between the various Changeling species, there’s the Silence, there’s the fact that the Silence doesn’t work (or at least, doesn’t work as well as it’s supposed to – perhaps I’m dwelling too much on that opening line but compared to an “overwhelming incidence of insanity and serial killing” the Silence actually seems to be doing pretty well for itself), there’s the whole bizarre psychic internet thing, and the fact that the psychic internet thing has somehow come alive, and has a consciousness sort of roaming around out there doing weird stuff.

It’s a huge and complex world, and the more I hear about the series, the more interested I am in seeing more of what happens in it, but the book itself didn’t quite give me that “must read more” feeling that I understand it gives to a lot of other people.

Everything I learned about life and love from reading Slave to Sensation: If you have sex dreams about a psychic, check to make sure she isn’t having them too. Real estate deals are great ways to meet prospective romantic partners. Hard as it may be to believe, training people to feel neither joy nor sorrow, neither pity nor remorse, does not make them incapable of violence.

Previous article: REVIEW: Stay With Me by Elyssa Patrick
Next Post: REVIEW: Beyond Pain by Kit Rocha