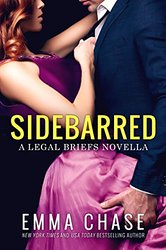 Join Jake & Chelsea, Stanton & Sofia, Brent & Kennedy as they navigate the hilarious and heartwarming hurdles of love, life and the law in this final addition to the Legal Briefs Series.

There was a time when Jake Becker had it all together. He was controlled, driven, ruthless—in and out of the courtroom.

Then, six irresistible orphans and their heartbreakingly beautiful aunt crashed into his perfectly ordered life. They changed everything. They changed him. Now he’s a husband, an upstanding member of society, a father figure—a family man.

And he’s pretty damn good at it.

Sure, he has to referee sibling smackdowns, re-learn algebra, ensure his clients stay of jail, and keep his wife happy—but it finally feels like he’s got it together again….

So, of course something has to screw it all up. It’s huge. Life-changing. Kind of terrifying.

And it will be the most amazing, perfect thing he’ll ever do.

When I saw there’s a follow up to your novel “Sustained,” well of course I had to read it. Jake is the kind of hero I usually avoid with a mile wide radius but you sold me on him and I had to find out “what happened next.”

It’s two years later and the relationship between Jake and Chelsea is still great and the minions are growing. The smoking sex, which must be carefully timed and located – what with the 6 minions – is awesome too. Jake’s getting this parent thing down though he’d rather swallow boiling lava than have The Sex Talk again with teenage Riley – something she agrees with too. The “buying school supplies” scene is hilarious.

A slight date miscalculation gets Chelsea peeing on sticks and making the two of them ponder a baby. The pondering doesn’t last long before the decision is made which brings out ramifications in the family dynamics which Jake hadn’t though of but which he handles with his usual forthright honesty and directness.

Things seemed to be going so well – too well – that I wondered what the relationship conflict would be. Turns out it’s something germane to Chelsea’s job and Jake handles it in his usual forthright honest and direct style. It’s his added dash of caveman that leads Chelsea to getting livid at Jake. I’m with Chelsea and Sofia on this one and thankfully Jake sees the light. They work this one out personally but I would have liked to have seen the thing carried through professionally just to dot all the i’s.

This is definitely a gift to fans of the prior book and should be read after that one. It’s great catching up with everyone and getting a glimpse far into the future of the McQuaid/Becker clan. But it’s still Chelsea who makes Jake tick. B

Because that’s the power she has, this lithe wisp of a woman—her voice calms me, and her touch gives me peace.