REVIEW: Scoring with the Wrong Twin by Naima Simone 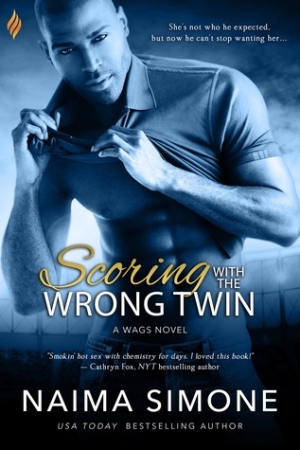 Some of my friends on Twitter told me I should read this book. I was promised a smoking hot hero and some smoking hot sex. So of course, I bought it.

They were right. Zephirin Black is a mighty fine man and the sex scenes were indeed hot. They were also inventive and fun.

I didn’t read the blurb before one-clicking. Perhaps that was a good thing because ordinarily I don’t go for books where one of the main characters lies to the other for a large part of the book. Sometimes it can work – a hero undercover for instance. But it can be a tough sell for me. Here, Sophia Cruz is persuaded by her supermodel-in-the-making sister, Giovanna, to pose as her during a shoot for Sports Unlimited magazine so Giovanna can walk a catwalk in Italy for a famed designer. The Sports Unlimited shoot was booked months in advance but it clashes with the Italy show and Giovanna desperately wants to further her career in Europe – without bailing on a longstanding commitment at home. As it happens, Sophia and Giovanna are identical twins. They are quite different in personality but, apart from Sophie having blue tips on her hair and some piercings, they are physically the same. With reluctance, Sophia agrees.

At the shoot, she is confronted with the gorgeousness that is Zephirin Black, a tight end for the Washington Warriors football team. He is six foot six of handsome muscles and she is overwhelmed by the attraction she feels.

God, I promise if you get me through this without me embarrassing myself, I’ll start attending mass more than twice a year. I’ll stop lying to Mama about her arroz con pollo, and quit thinking evil, homicidal thoughts about Brian… But I’m gonna need you to increase my faith on that last one. I mean, he’s a complete douche.

Zephirin had met Giovanna before and found her aloof but this Giovanna is totally different. The chemistry between them is off the charts.

At the shoot, Sophia has to pretend to be Giovanna. If she lets slip she is not, it could do a lot of damage to Giovanna’s career. But afterwards, when she happens to meet up with Zephirin in a local bar, the imperative to lie is not quite as clear cut. Yes, she doesn’t know Zephirin and he could rat her out to Sports Unlimited but really, it didn’t seem very likely to me. Zephirin makes it clear that honesty is his number one rule when it comes to any kind of relationship. He’s been terribly burned by his ex-girlfriend, who lied to and manipulated him and just about ruined him. Honesty is very important to him. My own feeling was that had Sophia fessed up at the bar or before they had sex, Zephirin would have been likely to shrug it off. She would have been honest with him from the first opportunity where it wouldn’t burn her sister and it would have been something of a risk (though not a big one IMO) in that Zephirin could make trouble for Giovanna if he was so inclined. I was kind of hoping that she would. She certainly thought about it. But she didn’t.

When Giovanna and Sophia were both in high school, Sophia was fat and shy and was bullied by her peers. Giovanna tried to protect her sister but she wasn’t always able to do it. Sophia has always felt overshadowed by Giovanna’s extrovert personality and her comfort with her looks. While Sophia looks the same as Giovanna, she doesn’t think of herself as beautiful. I understood this. Logic doesn’t have much to do with feelings of inadequacy and the bullying she suffered in high school left scars. What really keeps Sophia quiet is the thought that Zephirin might only be interested in Giovanna and not Sophia. And even when it is obvious that this isn’t the case, Sophia, because she is unsure of herself and her own power, doesn’t believe it enough to tell Zephirin the truth.

They agree to a short-term, no-strings relationship. Sophia justifies her continued lie in various ways but is never truly comfortable with it. Of course, if she’d lied without a second thought she would not have been a worthy heroine but her qualms did make it easier for me get with the program. And, as much as Zephirin believes she is a model who prefers to be called by her “middle name, Sophia” in personal relationships, Sophia does reveal herself to him in the other ways which are important.

Sophia works in app design in a health company. She is scary smart and super talented. However her supervisor keeps taking credit for her work and failing to acknowledge her skills, promoting others above her when she works harder and does better. This felt, unfortunately, absolutely authentic. By the end of the book I was totally cheering for her when she really stepped into her own power.

Apart from the lie she kept telling Zephirin, I did love her. She was feisty and fun. My sense was that Zephirin’s obvious attraction brought her out of herself and was one of the keys to her building her confidence. Even when she was telling him off.

“Hey. Excuse me. Up here,” she snapped, pointing toward her face. “I definitely don’t live in my tits.”

The story is fairly short – it’s a category after all, but that worked well. I don’t think the lie could have been perpetuated much longer in a way that I could manage. It was just enough here.

The chemistry between Zephirin and Sophia is wonderful and I enjoyed how they connected in the ways other than physical as well. There is a bit of the Cinderella tale to the book and that has always one of my favourite fairy tales. And there is something wonderfully attractive about a guy who sees you for who you really are, sees something perhaps no-one else has and loves you for it.

I enjoyed the writing style. It was fun and sexy and kind of joyful.

Slowly, a full-fledged, heart-stopping, gorgeous grin spread across his face. Goddamn. No wonder the man didn’t do that often. He had to use his smile like the nuclear codes. Carefully, rarely, and only in important circumstances. Otherwise, this world would be rendered to ash from all the exploding ovaries.

There was one thing which bothered me. During an intimate scene Zephirin’s penis was described as:

…the thick, long part of him that made him a man…

I read Scoring With the Wrong Twin in a day and immediately went out and bought the next one in the series, Scoring Off the Field which came out very recently. It looks like you have a decent backlist too so there’s plenty more available for me to enjoy.