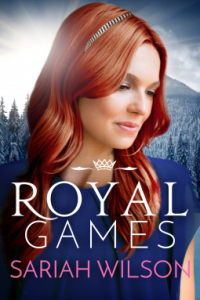 Genesis Kelley didn’t just get her heart broken. The aspiring veterinarian had it crushed in front of millions of viewers on the dating reality show Marry Me. Now, just as she’s getting her life and dignity back together, her royal heartbreaker, Prince Rafael of Monterra, has landed in Frog Hollow, Iowa. And he’s renting out her aunt’s guest cottage.

Deceiving TV audiences for his brother’s sake cost Rafe the girl of his dreams. But he’s going to fix it, even if it means moving from his mountain-kingdom home to small-town Iowa. A prince doesn’t give up on his rightful princess—especially once he realizes Genesis is in deeper danger than she knows.

Between fixing her truck, whisking her off to Monterra for a whirlwind date, and charming the entire town, Rafe is thawing the ice around Genesis’s heart. Will it be enough to earn back her trust, protect her from her past—and sweep her into a real-life fairy tale?

The blurb for this one sounded cute, maybe veering on too cute, but I had a string of vet themed books going and I couldn’t resist a heroine from Frog Hollow, Iowa. I quickly realized that this was part of a series, is in fact the 3rd book, as stuff has already happened, namely the reality dating show Genesis was on that apparently got all this started. I wondered if I could start with this book and not miss the relationship growth of Genesis and Rafe. Turns out there’s plenty about Genesis’ changes but Rafe stayed fairly besotted and unchanging from the start. By the end of the book it’s dawned on me that Rafe is like Ken the Romance Hero doll. He’s too perfect and almost without flaws. The story is really about Genesis coming to terms with her past and present. Rafe is just a gorgeous cardboard cutout with tons of money who thinks she walks on water and talks to God.

I found the book funny with Genesis having a great support group of friends. She and her buds have just the right amount of snark for me without going over board. And she’s an original Star Trek fan – something she bonds with Rafe about. As Genesis will discover, in the face of a determined man who loves you, “resistance is futile.” Rafe is suitably humble and sucking up though Genesis still won’t allow him to explain his horrible fox paws to her or – if one hasn’t read the previous book – to us either.

Rafe knows Genesis’ weak points. He lures her with computer games – ones with expansions that haven’t been released yet. And game consoles. He’s ruthless. He’s also considerate, kind, generous and thoughtful. I’m conflicted about the fact that he went ahead and fixed Genesis’ truck even after she told him not too just because he knew she relied on it and needed her wheels. Rafe is, Genesis knows, the type who sees something that needs doing and does it.

He is open and honest with her about one thing though – he means to win her back and will stick around like burnt grits on a skillet until he does. He also doesn’t appear to know the meaning of the word “no.” No, don’t send me flowers. No, don’t fix my truck. No, don’t do 1000 other thoughtful things that make my life easier. Rafe’s also not above roping the whole town of Frog Hollow into helping him by doing kind and nice things for them too. Does this man print his own money?? Frog Hollow has definitely become his Fan Club as he drops enough moolah on the town to fund a small country.

Genesis apparently has Something in Her Past that has led her to be Uber independent and unwilling to be controlled in even the slightest way so whereas most people would accept Rafe’s kindnesses and smile, they make Genesis twitchy. Genesis told Rafe all her secrets during the reality show and with the memory of an elephant, he pulls out all the stops. Ah, Rafe has something in his past – again only hinted at so far – that might account for the depth of his determination to win Genesis in the face of all her strenuous efforts not to be won.

So, why is Genesis resisting this otherwise perfect specimen of maleness? Lies. Lies and humiliation on TV while a sizeable portion of the reality show viewers in the US watched after he pretended to be his brother and court her . Trying to resist him is like trying to sweep sand dunes in the Sahara. Pointless, frustrating and ultimately useless. Remember the bits above – Rafe intends to woo and win Genesis back and he refuses to hear “no.”

Of course Rafe is too good to be true: too cute, too willing to do what ever it takes to make Genesis’ life easier, too considerate. But he’s a romance hero in a feel good book so it’s mandated if unbelievable in real life. There is nothing remotely real about this book but hey, I’m reading about fake royalty so I’m just going with everything. As I kept reading, I realized that this is like a romcom movie book.

Genesis’ reasons for not tolerating any lying in her life are pretty damn legitimate and once they’re revealed I can understand her actions and the depth of pain that what Rafe did caused her. It doesn’t help her resolve that every time Rafe gets near her not to mention kisses her that she turns into cooked spaghetti and drapes all over him like Spanish Moss. They’re like magnets. Genesis gets some words of wisdom from a few people she trusts about how to trust in someone who’s hurt you in the past. Now if she can work up the courage to put it into action. Rafe has spent a boatload of money in the town, relocated from his home, his country, his family and put his entire life on hold for a chance to get back the woman he loves and adores and Genesis begins to ponder whether or not she can put past pain behind her and reach out for a future with him. Finally Rafe’s Reasons for What He Did are revealed. It explains his overprotectiveness and also why he went along with the show plot twist that sent Genesis reeling away in pain and betrayal. Yeah, he’s got good reasons too. Family loyalty goes deep with Rafe. The quick trip to Monterra for the wedding of the couple from book No 1 is saccharine enough to induce a diabetic coma. Very cutesy with 10 tablespoons of sugar.

There is an evil troll from Genesis’ past who sneaks onto the scene, leaving slime trails behind him. And after pages of sugar overload, the final villainy arrives like a shit storm out of nowhere. It’s terrifying but quickly over. Then comes the Big Mis. I’m not a fan of Big Mis plot points and here it’s very annoying yet in a teensy way also understandable – as Genesis did tell Rafe not to do something – but the circumstances are such that when Genesis takes exception that he actually did that thing – and saves her life by doing it – and then says things in the heat of the moment and under stress that he actually believes – how dare he!, can’t he read her mind and know she didn’t mean them? – I get annoyed again.

Rafe is the super uber wonderful romance hero of romance heroes. Like Mary Poppins, he’s practically perfect in every way. He’s put up with more guff while trying to win back the woman of his dreams than almost any romance hero should be expected to endure. He’s Patient Griselda personified. When he gets his heart stomped on one last time and does what Genesis – in her delirium – yells at him to do, I’m thinking, “Really? Really?? He gets treated more like this at the end of a book full of being treated like this? And then Genesis gets mad at him again??”

At this point, I throw my hands up. She’s mad at him and won’t contact him yet she wants to hear from him and her heart flip/flops with each phone call the gets, each knock on her door. I get that she’s been through emotional trauma and is projecting most of her anger at one person onto “Safe” Rafe. But come on, Genesis. You want to hear from him? Contact him! Stop expecting him to mind read. Then when her aunt calls her on her lame excuses, Genesis just digs in deeper and offers up lamer ones. She finally admits she’s been a bit selfish and self-centered. Ya think? If I could have shaken her, I would have though maybe, maybe she’s finally dealing with all her issues. It’s rare that I finish a book feeling sorry for one character after the “HEA” but this is one. God bless Rafe because he deserves it. So a B start with a D ending.