REVIEW: Remains to be Seen by Elizabeth Cadell

When Philippa Lyle, engaged, returns home from her lengthy stay in Canada, she finds that her small town has changed. The ruins of a Roman villa and bath have been discovered and the town is over-run with archaeologists, tourists, and curiosity seekers. Some of the residents are excited about the changes and financial opportunities, while others are not pleased and make plans to leave town.

Ward Rowallen, the young owner of the crumbling manor on the hill, is very enthusiastic about the changes that the ruins bring to this town. Philippa is pulled into the activity of the site and suddenly realises that her fiancé, Dudley Errol has faded from her memory and Ward’s charm is becoming difficult to ignore.

Remains To Be Seen is a charming novel in which, amongst the remains of an ancient civilisation, romance flourishes and Philippa must make a decision that will change her life. Mystery abounds in this delightful story by Elizabeth Cadell.

I wanted to read one of the more recent – or should I say one of the last – books that Elizabeth Cadell wrote. “Remains to be Seen” fit the bill as it was written in 1983. The title is a clever play on the two main things happening in the story. The quiet English village of Montoak has been thrust into the tourist limelight by the discovery of a Roman homestead – complete with bath house and extensive inlaid Roman pavement. And hometown girl Philippa Lyle has returned for a brief visit before heading back to Canada to be married.

Day trippers are dropping money on the town to “see the remains” of Roman Britain while Phillipa’s two year stint in Canada opens the eyes of a childhood friend of hers to how wonderful she is. She also suddenly begins to develop feelings for him. As Ward tells her flat out, he believes in the sanctity of marriage but a woman only engaged to another chap is still at liberty and he’s going to push as much as he can to get Philippa to see that he – Ward – is the man for her. Whether or not Philippa returns to Canada and marries Dudley Errol (eeh, what a name) – “remains to be seen.” 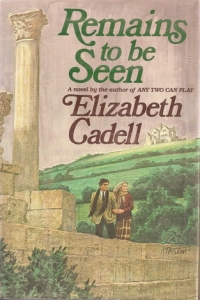 I’ve begun to approach each new Elizabeth Cadell novel I read with a bit of hesitation until I figure out what category it will be in. Some of her books are straight out romances while others can have not only a mystery but also a murder to be solved. “Remains to be Seen” is more a romance as well as a bit of slice of life. The mystery turns out not to be about which chap Philippa will choose – I’ll just go ahead now and say it’s fairly obvious who will end up in front – but how a much older mystery will be solved.

As the book opens, there are a lot – I mean A LOT – of characters introduced but worry not. Just keep in the back of your mind that most of them are all neighbors living near the Roman excavation and their relationships and places in the story will slowly be unveiled when needed. It’s fun to watch all of them interact and they’re drawn with humor and warmth – except for two slightly villainous ones who are served nicely warmed revenge.

Phillipa is a modern, intelligent woman who appears to have had a sex life before this, Ward is actually hard-working as well as charming – actually this basically leaps off the page, being in the same room with him would be like floating along on a torrent of gentle likability. The childhood friends are caring and the two older, Honorable sisters have a bit of sweet cunning up their sleeves. The one thing that I didn’t especially care for is the fact that all through the book, sensible, solid Dudley is off stage, waiting to have his ring handed back to him. It’s not really a love triangle but at the same time, it sort of is. This is slightly mitigated by the fact that it’s fairly obvious that he’s aware that Philippa isn’t madly in love with him. Hopefully he finds a nice Vancouver woman upon his return. B