As a self professed lover of sports romances, I get quite a few recommendations for books featuring athletes. Sarah Wendell found this book and suggested we both read it despite the blurb that was poorly drafted and contained cliches. Unfortunately for both of us the blurb was our first clue as to the quality of writing in this story. There are several sentences in the book that actually portray the opposite of what was meant to be conveyed. There are formatting errors. The spelling of the hero’s name changed from page to page, sometimes even in the same paragraph. There were about five appearances of a square []. I’m not sure if that was supposed to be some form of punctuation or what. While other books feature rampant comma abuse, this one appeared to be comma allergic (i.e. “You are not taking a bath you are awakening the senses.”) But even beyond the editing, formatting, and typos was the really awful story. 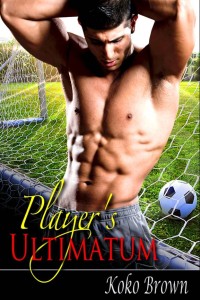 Unfortunately, Robbie has an enemy. Il Duke, Paulo/Paolo (depending on the paragraph), the captain of Roma Internazionale, lost his best friend to suicide when the best friend lost his position to Robbie. Paulo has hired a paparazzi photographer to follow Robbie around and get incriminating pictures. Unfortunately, none could be had but once Yvonne comes, Paulo turns his attention to seducing her away from Robbie. But Paulo wants the reader to know that he’s selfish, not an asshole. “He hated scenes especially with women. Paolo might be selfish, but he wasn’t an asshole.” He says this after this:

Not fully buying it, she crossed her arms and thrust out her chin stubbornly. “Have you been out with anyone else?”

Paolo tamped down his rising anger. For some reason, one’s celebrity equaled a disturbing familiarity on other people’s part. “Even though it’s none of your business, I haven’t been out with anyone since you.”

“I’ll think about it. The team’s twice a day practices don’t make me good company of late.” Paulo chucked her under the chin. “But when things slow down, you will be the first person I’ll call.”

Paolo almost rolled his eyes. “You’re at the top of my list,” he reassured without locking himself into a promise he knew he wouldn’t keep.

Paolo/Paulo, you just made her a promise.

Yvonne does a fairly shoddy job of acting as Robbie’s fiancé given that she is constantly panting after Paulo and when she isn’t panting after Paulo (name intentionally screwed up to mimic the book), she is having sex with a stranger in a mask during Venice’s Carnivale (who conveniently turns out to be Paolo/Paulo).

The book is filled with cliches and bad metaphors.

**His game plan should have been simple as a wall pass. Of course, like any play the execution turned out to be damn near impossible because he hadn’t anticipated the strength of the defense or taken into account his own weaknesses. And above all he was consistently breaking the cardinal rule: never take your eyes off the goal.

**She’d kissed plenty of frogs in her life.

**She’d had one or two lovers who’d rocked her world, yet none of them completely demolished and rebuilt it like he did.

**Paolo fell into a tailspin…

Even beyond the use of cliches is the representation of the characters. Yvonne has a smoking body, beautiful skin, and an attractive face yet she doesn’t realize her own beauty, only wears sweat shirts and jeans to hide her curves, and doesn’t know how to use makeup. Oh the reluctant and hidden beauty trope. Never heard of that one before. Worse, it is totally inconsistent. In the very first chapter, Yvonne states:

Her savior was the face of Allure cosmetics! Only last week the woman’s gamine profile had convinced her to buy the cosmetic lines’ Go-On Sheer-Stay-On Sheer lip gloss in jazzy pink.

Another gift from Robbie, she eyed the sleek tubes and pots resembling candy. How did he know what colors to pick? Makeup had always been a foreign concept and she couldn’t remember the last time she bought a tube of lipstick.

Um, I don’t know. How about LAST FREAKING WEEK! Or

She might have been blessed with a curvy Coke-bottle figure and thick shoulder-length hair, but her cinnamon brown skin and average looks wouldn’t call any boys to the yard. So very few tasted her milkshake.

But then about two paragraphs later:

her pearly whites and twin crescents embedded into her brown skin always worked back home.

Which is it? Either no one tastes her milkshake or her dimples and white teeth always work? Paulo isn’t a manwhore but a guy who loves reading about fertilizers.

Careful to stay inside the teams’ VIP area, he avoided making polite conversation, signing autographs or posing for photographs with fans. He loved his fans, but they would only delay his departure. And if he left now he could still catch Luigi, The Renaissance Guy. Tonight’s episode was on repurposing old newspaper into fertilizer.

Yet he acts like a manwhore (see infra prior excerpt where he promises to call said woman).

He never took a woman home, no matter how much he wanted to shag them. Once a woman came over, she started acting like she owned the place, making it even harder to get rid of her. As a rule, all of his affairs were carried out elsewhere either in hotels or the homes of the women he dealt with.

But let’s talk about sentences that make no sense:

Let’s take a look at the editing:

Let’s not forget the completely WTF moments during sex:

Sometimes a good story and a great voice can overcome problems in editing, formatting, grammar but when the story is just as bad, there is nothing to hang the reader hat on. There are two good things in this book. The soccer scenes seemed authentic and the way in which the sports world had to deal with Robbie’s sexual orientation was great. That’s about it. F