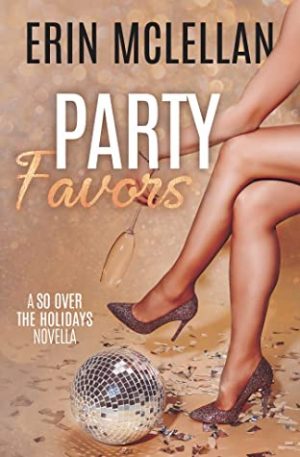 I had the pleasure of reading Candy Hearts earlier this year (which is book 2 in you So Over the Holidays series of novellas) and I loved it so I was happy to read Party Favors (which is book 4). The series is loosely based on a group of friends which have a common interest (in one way or another) in Lady Robin’s Intimate Implements. Some of the novellas are M/F, others are M/M and this one is F/F.

Wren Rebello designs lingerie for Lady Robin (and her best guy friend is William, one of the leads from Candy Hearts). Some five years earlier, she put out a call on Twitter for a vintage lingerie pattern and thus she met Amanda Ellis. They became Twitter friends and, over time, progressed to daily text conversations. Prior to the book commencing, they had never met in person or even spoken to one another and only knew each other via test and via social media.

Wren has a reputation as a bit of a wild girl, all spontaneous fun. She is lonely however and has lost relationships because people perceive her to be unable to commit or be in a serious relationship. Wren like the fun part of herself but wants to be taken seriously too.

“I want to have a good time,” Wren said, totally unaware of Amanda’s mini crisis. “I don’t want to be seen as a good time. You feel me?”

Amanda is the “disco ball heiress”. Her family, many years ago, made a fortune on disco balls. They’ve progressed to fancy glassware now but they’re still very wealthy. Amanda does not enjoy her job with the family business and enjoys even less her mother’s expectations she will date and marry a “suitable man” who will likely have a numeral after his pretentious name. Amanda loves vintage fashion and longs to open her own vintage boutique but has been unable to break away from the confines of family expectations.

Both women are bisexual.

Wren, as it typical of her, spontaneously suggests Amanda join her and her friends at the Father Time Farm and Resort for a mini vacation over New Year’s, starting on December 29. Amanda, as it not-at-all typical of her spontaneously accepts, much to her parents dismay.

Understandably, both women are nervous to meet but also fizz with excitement of the potential.

She was here now, about to meet her online best friend. A woman she messaged with every day but whose voice she’d never heard. A woman who made her every day brighter and better but didn’t truly know Amanda at all. It was so easy to hide the scared or boring parts when you could curate your every word, every thought.

Wren and Amanda will share a two bedroom cottage at the resort but as it happens, there is only one bed. And we all know what happens when there’s only one bed.

Wren and Amanda each have had a crush on the other and when they meet in person that crush gets bigger and deeper and before long they decide to have a fling over the holiday. Each wants more than that but it takes a while before either of them is brave enough to admit that to the other person.

Party Favors is very much an erotic romance. The sex is hot, creative and plentiful. As should not be surprising given Wren’s occupation and her association with Lady Robin’s Intimate Implements, there is also lingerie aplenty and a variety of sex toys put to use. The sex was earthy and frank but also served to demonstrate the developing relationship. Perhaps because I have been having so much trouble reading anything lately, I perversely found myself skimming over some of the later sex scenes however, because I wanted to get to the bit where the pair confessed their true feelings for each other and sorted out how they were going to have their HEA. Their sexual connection was so strong, it did not create any tension in the story – that part was pretty easy for them and I found myself wanting to get to the bit that was difficult. (Usually I have no trouble reading and I don’t skim sex scenes but this is what 2020 has done to me.)

I liked the easy way Wren and her group of friends accept one another’s sexuality and how they absorbed Amanda quickly into their broader group. The found family aspect of the series is very strong, notwithstanding that there are biological bonds amongst some of the main characters across the various other books too.

I really liked Amanda’s response to a jerkwad who hits on her at the bar one night while she’s waiting to Wren to arrive. A+ Amanda!

“I own the biggest party entertainment company in the Midwest—Worth Entertainment Group.”

“We partner with Father Time Farm and Resort to throw the New Year’s Eve party here. It’s the event of the year. Let me buy you a drink, and I’ll tell you about it. The tickets are hard to come by, but I have an in.” He said this with a wink. She hated winkers.

“I already bought my own drink, and I have a ticket.”

The man studied her, which never boded well. “You’re very lovely, but I bet you would be prettier without all that makeup. You can’t beat natural beauty.”

“Ah. You’re out of luck then.” She pointed at herself. “Nothing natural about me. Fake hair. Full makeup. Fake tits. Fake tan. I like the way I look. You’re terrible at negging. Zero out of ten.”

I also liked the way Amanda and Wren talk openly about their sexual needs and desires – and how that opens the door to other conversations later on.

“I’m down to fuck, Amanda. So down it’s not even funny. Just update me if there’s anything I’m not giving you. Especially if it’s emotional.”

Given how much Amanda had struggled to break away from her family, the resolution seemed a little too easy. I didn’t quite get what really changed. It didn’t seem like it was or should be all down to Wren.

I feel like I’ve been invaded by a pod person saying this but I could have done with a little less sex and a little more detail around how their relationship beyond that three days was working.

While I liked Candy Hearts better, Party Favors was nevertheless fun and sexy and enjoyable – I have a feeling I’ll be reading a lot more from you in the future. (Here’s hoping my 2021 reading mojo improves though!).