REVIEW: For Richer, For Poorer: Love & Adventure in Regency England by Valerie Holmes 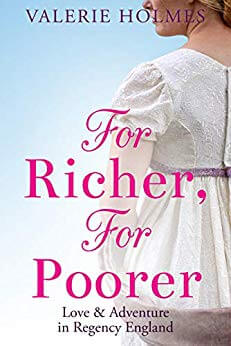 London barrister and gentleman, Jerome Fender, has just returned to England after five years as a Captain in the killing fields of the Napoleonic Wars. With the harrowing scenes of battle still haunting his every thought, he sets out to start a new life and to find a wife who will share it with him.

Meanwhile recently orphaned 21-year-old Miss Parthena Munro has also arrived at a North Yorkshire market town. She has been sent away by her scheming sole relative, cousin Bertram, to be governess to a local family, only to find that the family has already moved away from the area. Left stranded far from home with no job and no place to stay, Parthena encounters Mr Fender outside an inn, where she takes a chance to steal his money in a witless moment of desperation. She whispers a promise to return the money one day and makes off across the wild Yorkshire moors.

But it’s not long before Fender catches up with her. However, on learning of her plight they set out on a plan to seek justice against the wrongs plotted by Bertram. With Jerome’s help, Parthena returns to her home to the great surprise of Bertram, who, thinking that Parthena, the rightful heir to the estate, was now out of the way, was about to clear his debts by selling the family estate.

Jerome endeavours to hatch a new plan to thwart Bertram, but Parthena’s rightful inheritance can only fall to her if she marries within the month. Parthena and Jerome discover the flame of love has been kindled between them, but is it already too late?

I’d been hoping to read some more of your Regencies especially since you feature main characters who aren’t aristocratic and set the stories outside of London and the Season. Jerome Fender and Parthena Munro are of good family but the late wars have changed society and the new fangled mills look to alter England forever.

Jerome Fender is back from the war and trying to adjust. I like that he wants to find a wife and settle down but with companionship as well. Dare he hope for a soul-mate, someone to want him for himself and not like the Army which only wanted him because he can organize men? There’s no PTSD explicitely mentioned but he also wonders if he can still manage polite society or if war has ruined him for this. The thought of starting a family was one thing that kept him sane during the battles while watching other men die. He knows some might think it silly but there it is.

Thenia intends to pay Fender back; she knows what she took could cause her to be transported and she immediately checks the amount in his coin purse to know full amount she’ll need to repay. Not that that will probably make him any happier … She’s also smart in how she goes about finding her way across the moors via the trods and in her knowledge that she has to keep moving to avoid capture and keep warm. She’s got a plan. Too bad for her that Jerome Fender is equally determined to find her and has years of experience in the war hunting the enemy which he will put to good use here. She might have eyes that make him dream of more but he’s not going to lose his money to anyone.

When Jerome does track her down, Parthena finds herself neatly trapped by her own words and actions and left to Jerome’s initially less-than-tender care. He’s a man wronged but worse for her he’s a barrister wronged though he’s willing to hear why she felt driven to steal – no he won’t accept her term “loan” – his money. Faced with an explanation or a trip to the magistrate, she’s got no choice.

As Jerome twists some mental screws to get her to tell him the truth behind her dire circumstances, he not only comes to believe what she tells him – which is backed up by other evidence and people with whom he’s spoken when he was tracking her – but begins to wonder if fate might not have put his future bride in his path after all. Now, how can he win back her trust without her feeling obligated to him?

From Thena’s story and circumstances, Jerome gets a first-hand lesson – not that it sounds like he really needed one – in the cruelty of a man not involving his female relations in business affairs but rather leaving them to fret and worry about what they don’t know. His sense of justice impels him to look into Thena’s affairs and see her get what property is owed to her. His growing feelings for her urge him even more strongly to do what he can legally and morally.

Thena has found that her experiences have changed her. Where once she gave little thought to servants, the working class or the poor, now she’s lived – albeit only briefly – in their shoes. She’s known desperation and when she discovers the plans her crooked cousin has for the lovely little village where she grew up, it’s not just her own loss but also the possible uncertain fate the servants and villagers face that alarms her.

Jerome’s intelligence comes to the rescue with a nifty plan to catch her cousin out but he needs her fire and willingness to stand up for what’s hers in order to pull things off. With a lawyer’s flare for words and his heart on the line, Jerome has what it takes to win the day and his lady. I would have loved a scene of Cousin Bertram realizing he’s been had but overall this is a nice and quick yet thorough romance. B

Note – this was originally released as “Parthena’s Promise.”