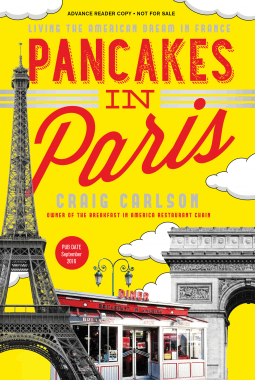 Any expat knows the unique frustration of not being able to find American staples like peanut butter and pumpkin pie abroad. But thanks to Craig Carlson and his restaurant Breakfast in America, it’s now possible to get hearty pancakes and creamy milkshakes in the heart of Paris, the city of croissants and crepes.

Carlson was the last person anyone would expect to open a restaurant in Paris. For one, he’s not French. He had no experience running any sort of business, and he had no idea how to navigate the notorious French bureaucracy. But what he did have was determination and a dream. Pancakes in Paris combines delightful tales of humor and hope with the satisfaction of an old-fashioned American breakfast.

“What I love most about BIA is when I’m here having my breakfast, I’m in America. But when I step out that door, I’m back in Paris!”

“Since its opening, Breakfast in America has become a cultural cross-roads between conflicted countries …”

I was hooked with this title and I simply had to find out about breakfast food in the City of Love. I also learned a lot about dreams, determination and French labor laws. And love, a lot about love. The story of how “Breakfast in America” came to exist is told in an amusing, fun conversational style as if you’re sitting for hours over a lovely meal with fine wine and good friends, soaking it all up in (mainly) happy conviviality.

One good thing about Carlson starting with a crappy childhood and ghastly parents plus living in a terrible neighborhood – they lead to the development of a keen work ethic and studying French. Then signing up for a year abroad for the human connection and passionate discussions while being all in another’s personal space. So begins a year abroad with lots of myth and stereotype busting experiences. One expected thing he was prepared for though – the French learned in school was nothing like what is heard on the streets of Paris.

But this also lead to the discovery that unlike America where one has to always be upbeat and peppy – in France one can be dark and moody which translates there to deep and interesting. In his intensive grammar class, a teacher they nicknamed Mme Petit Dragon would sadistically grill them on conjugating verbs. Then they learned “French Attitude” including how to nonchalantly hold one’s cigarette. After five weeks in Paris it was off to Rouen where a miserly old bat starved him on canned soup. Not until a trip to a food fair in Dijon was his palate awakened and did food become more than just something that keeps you alive.

So … on to the restaurant? Not quite. First came film school in California and years of trying to make it as a script writer in Hollywood. Yet not until after another year spent in France and a return to the US did the supreme epiphany occur over a traditional American breakfast at an LA diner. Suddenly, everything snaps into sharp focus and a life plan is born. Now came the MBA-ish stuff of getting a dream off the ground.

After a long hard slog for investment capital, finally on to Paris to set up the company. Sheesh, to set up a company, you need a commercial visa but to get a commercial visa you need a company. And if your application is rejected, you get taxed on that. After a long few hair pulling months trying to find a location and secure a loan from a French bank, a connection with the French brasserie mafia finally zings things along.

Growing pains and working out the kinks are inherent to any business but doing this while unused to the bureaucracy of another country? With things smoothing out, then came war and freedom fries. Ouch. Business improves but French labor laws come into play and even Carlson repeating to himself “I’m living my dream …” over and over didn’t bring the light at the end of the tunnel. Especially when an employee sues after uttering death threats – and wins a settlement. Double ouch. Putain de merde. No one ever needs to remind me not to start a business in France. Those labor laws..?!

Strangely though it wasn’t all the obstacles already faced and overcome but rather a line from “Casablanca” that brought home how precarious the whole venture had been all along – how close the risk of total failure. If Rick’s place could only last for two weeks while shut down …. Luckily, luck finally shines in BIA’s direction with news articles, international press and guidebook coverage! Plus staff finding true love among the hash browns, pancakes and real ‘amburgers (pas de McDo). Well, it is Paris.

But then, the tenth anniversary speeches and heartfelt love expressed by so many of the BIA workers shows that most people are actually very kind and know a good thing when they’re working there. So after finishing the book, the path from childhood, through year-abroad, to each and every friend met along the way to the founding of BIA, the marriages begun and children born to those working there and the emotional wrap up shows the truth of Clarence’s quote in “It’s a Wonderful Life” – “Strange, isn’t it? Each man’s life touches so many other lives.” For Carlson, it really has been a wonderful life. Not many people discover their dream and then – against unbelievable odds – actually make it come true. Cheers BIA. B