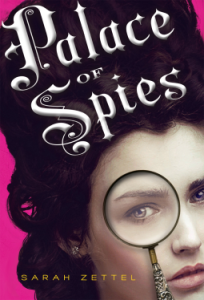 A warning to all young ladies of delicate breeding who wish to embark upon lives of adventure: Don’t.
Sixteen-year-old Peggy is a well-bred orphan who is coerced into posing as a lady in waiting at the palace of King George I. Life is grand, until Peggy starts to suspect that the girl she’s impersonating might have been murdered. Unless Peggy can discover the truth, she might be doomed to the same terrible fate. But in a court of shadows and intrigue, anyone could be a spy—perhaps even the handsome young artist with whom Peggy is falling in love . . .

Years ago I read “In Camelot’s Shadow” and enjoyed it so much that I’ve always meant to read more of your work. Ah, the best laid plans and all that but it took until I saw this book offered on Netgalley for me to follow up on my intentions. The premise of a YA spy at the court of George I – be still my heart, not only a Georgian book but *the* original George at that – was almost too delicious to be true. The clothes, the wigs, the courtiers and the danger – “bring it” I thought.

The plot is fairly complicated with layers upon layers upon layers of dark subterfuge, confused meanings, cross purposes and hidden loyalties. Then add the usual court intrigues, back stabbings, lies and malice to achieve a foul maze that our heroine Peggy must navigate in order to save her head, avert a royal disaster and perhaps discover love.

Frankly all the convoluted, dark twists of the plot left me scratching my head at times trying to keep up with who was on what side, who had done what to whom and where it was all going. As confusing as all this is at times, it also makes a bit of sense in that Peggy is rarely told the truth by several people who are at their own cross purposes and often figuratively holding blackmail “daggers” to each others throats. The behind the scenes dealings of the high and mighty are seldom neat and clean and at this point in English history, things were mucked up to beat the band.

As the story took yet another turn and Peggy stumbled along trying to find her way, I had to keep reminding myself that no, she wouldn’t know everything, she would have to puzzle it all out and the clues she had to deal with wouldn’t be immediately obvious to her since she still couldn’t see the “big picture” so to speak. Most everything was explained in the end though, enough that I’m eager to see if she and her little band will return for further adventures.

What did delight me was a bit of immersion into life in London and Hampton Court Palace in 1716. Peggy is often at the mercy of men including her cold uncle, her slimy almost fiancé and the two men involved in her charade at court. She gains agency as she grows in confidence but it still felt period for her to frustrated in what she could realistically do and in being beholden to others. I enjoyed watching her use her mind and thrill to be in the presence of the movers and shakers of the day, to listen to the conversations held by Princess Caroline with learned men and to wish to take part in them. Peggy might not know precisely what she’s stumbled into but she’s not dumb.

Her possible romance is sweet as well. She’s no prude, as her reaction to one scene shows and as would make sense ‘back in that day’ as she explains it, but she’s also not going to jump into bed with someone just to get a sex scene in the book by a specific page count. I think teenagers actually can read this book without their parents worrying about what they might be seeing.

Still, I think a little background research into the personages and politics of the day would serve the casual reader well. Some explanation is given but, if you don’t know your Hanoverians from your Jacobites, initial floundering might ensue. I have discovered a liking for Princess Caroline and must read up some more on her as well. There is also one revelation about the real person Peggy is impersonating that had me scratching my head and trying to figure out how she would originally have gained her place at court. But, as I said earlier, I liked what I read and would definitely come back for more. B

→ Jayne
Previous article: If You Like Men in Uniform by Guest Melissa Van Dover
Next Post: Taking the “Bull” out of Book Review “Bullying”