REVIEW: Nothing But Trouble by Rachel Gibson 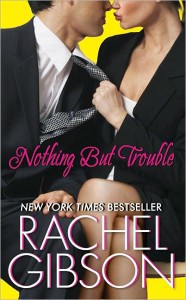 I am a slut for your hockey theme books. You can give me improbable plots and unlikeable characters but it you throw hockey into the mix, I will give up for your stories. Why? I like to watch big, strong macho guys fall for women who initially drive them nuts and I like to see woman who are horrified at the thought of falling for hockey players fall anyway.

Six months ago, hockey superstar Mark Bressler’s life was turned upside down by a horrific car accident. Now forced into early retirement and struggling with his new physical reality, he’s made a new career out of getting rid of the nurses and “minders” that the Seattle Chinooks team keeps trying to foist on him.

Chelsea Ross is to be his latest victim but she’s got an incentive he doesn’t know about: the $10,000 bonus promised to her if she can stick out three months with him. Chelsea might be little but she’s tough, having lived in the dog-eat-dog world of aspiring LA actors for almost 10 years as well as being the personal assistant to innumerable Hollywood assholes along the way. Bressler and his insults are nothing new to her.

But the passion they find together after finally giving into their attraction to each other is. The sex is great – no, better than great – but the emotional feelings that begin to develop just might be even better. If they can trust this potential love.

Long time fans of the Chinooks books will be happy to see a few familiar faces throughout the story but the book focuses mainly on Mark and Chelsea with a subplot for Chelsea’s twin sister, known to, and feared by, the team as the Mini Pit.

Even though Chelsea is short and Mark is brawny, I like the way that their relationship is balanced. I never got the feeling that he is overpowering her either physical or verbally. Chelsea more than holds her own here and proves her background of dealing with demanding people. And Mark, insulting as he can be, never slips over the edge into jerkwad territory. He does criticize Chelsea’s driving but then after surviving the kind of car accident he did, that’s reasonable. He comments on her fashion style but not on her body, despite what he thinks are her surgically enhanced breasts. Plus he makes sure that his former teammates behave themselves around her.

The physical attraction isn’t immediate, even though both admire each other’s bodies and they each manage to restrain themselves once desire starts kicking in. Chelsea is determined not to give into Mark sexually during work hours since this is something she’s never done. Even though it drives him nuts, Mark respects her boundaries. I appreciate that both can act professionally and not be reduced to puddles of drool.

Mark’s life was hockey and now that’s gone. There will be no coming back from these injuries and it does affect him. He does feel resentment at not being able to play for the Cup, he hates that his body won’t always obey him now and there is a dark pool of anger in him that takes a while to dissipate. All this felt natural and to be expected. His transition from player to “life after hockey” takes time and I’m glad you allowed us to see that time elapse.

Chelsea’s got a plan for life post-Mark and, just as she falls for him because he supports her, so did I. Hey, he doesn’t see anything wrong with her but he’s not her and if she wants this, then he’s onboard with it. The fact that Chelsea is able to reveal her secrets to Mark, and vice-versa, shows me how they are coming together.

Which makes the Big Misunderstanding all the harder to take. The only thing about it that keeps me from completely losing it is that Mark does have experience with woman who just want him for money. But, I still think his reaction is overreaction and it’s not like the money is coming from him, after all. Then the reconciliation happens on his sudden about-face which is fast enough to cause whiplash.

Up until the end, this book was cruising for me. And I still think that readers will enjoy most, if not all, of it. I love the hockey, I love most of the relationship, I love the big honkin’ ring Mark gives Chelsea but oh, that Big Mis. B

→ Jayne
Previous article: REVIEW: The Adoration of Jenna Fox by Mary E. Pearson
Next Post: Midday Links: Get Lover Mine and Others for under $3.00